They don’t have jobs nor do they have direction. There is an increasing discontent among the youth of India

While the latest budget aims to create six million jobs over the next five years, the spectacle of the recent, large-scale agitations in Bihar and Uttar Pradesh indic­ate deep-rooted anxieties of the une­m­ployed youth as a ‘nowhere generation’. The fact that over 1.2 crore you­ths applied for 35,000 jobs with the Indian Railways and were furious at the lack of transparency in the select­ion process, brought forth simmering tensions between the demand for emp­loyment and the government’s policy responses to it.

On the one hand, the ever-increasing concern of unemployment restricts the potential of transformative developm­ent; on the other, it highlights the crumbling of expectations and aspirations of youths. In 2014, a large share of voters was displeased with the UPA government because of a perception of massive corru­ption about it, along with concerns over women’s safety and the government’s inability to meet the demands for jobs.

The NDA was voted to power as it promised to overcome corruption, generate large-­scale employment opportunities and rapidly develop the country. Initially, the NDA government did initiate several development projects, be it Swachh Bharat Mis­s­ion, Smart City Mission, Start Up India or Make In India, but it started faltering by 2016-­17. The phase was marred by a contraction in economic growth along with rising joblessness. The falling economic growth has not shown any sign of recovery yet. The ann­ual growth rate of per capita net national inc­ome of the country slid down from 6.29 per cent in 2016-17 to 2.5 per cent in 2019-20 (with only the last week of the financial year attri­b­utable to Covid-19 lockdowns) to -8.4 per cent in 2020-21 (with a recovery of 8.4 per cent in 2021-22, as per Economic Survey 2021-22).

Among others, this massive decline in economic growth has led to an unprecedented rise in the unemployment rate in the country. Rather than creating pro-employment policies and investing in the pub­lic sector, which generates more empl­oym­ent, the government is privatising it. Not only is the private sector more capital intensive, it has also tried to casualise employment by hire-and-fire schemes and low wages. Counterproductive policies, from demonitisation to GST, did unprecedented damage to the informal sector and micro and small enterprises, on which over 90 per cent of the country’s workforce depends. Not to mention the lack of empathy in dealing with migrant workers stranded by the 2020 lockdown. Though crisis loomed large, the government has largely been looking the other way, rather than creating enabling policies and extending substantive support to workers affected by the mayhem.

While liberalisation-led economic growth ena­b­led about 1.4 per cent of the population to move into the middle class per year bet­ween 1993-94 and 2015-16, recent studies show that unsuitable policies may have pushed millions into poverty in the years that followed. A recent Oxfam report, ‘Inequality Kills’, argues that over 46 million Indians fell into extreme poverty in 2020, while the number and wealth of billionaires in India surged, crushing a considerable share of the total population under the burden of severe inequality.

The data also indicates decline in wages of two-thirds of the rural population in the last five years, accentuating the distress. A large share of the cou­ntry’s population is without assets, while most of those into farming hold small land parcels. They sustain their households with menial jobs and low income, but aspire to a brighter future for their chi­ldren by educating them, hoping that they ent­er the public sector or other better paying jobs. The agitations for reservations in employment by farming communities like Jats, Gujjars, Patels and Marathas; agitations by Dhangars in Maharashtra and demand for reservations by lower caste Mus­lims and Christians in several states; with upper castes pitching EWS (economically weaker sect­ions) reservation against caste-based reservati­ons—are examples of how employment matters to different segments of the population in order to raise or maintain their economic status. However, low, jobless growth has severely dismayed them and their younger generations. Their anger has occasionally been erupting across the country.

It was affordable higher education and employment in the public sector that once made econo­mic mobility possible for significant numbers of SCs, STs, OBCs and EWS. However, the neglect of higher education by the government, by not incr­easing budgetary allocations on the one hand, and pushing privatisation on the other, will make higher salary jobs inaccessible for those unable to get through the quota system, blocking any possibility of their economic mobility. This may freeze Indian society into its existing social and econo­mic stratification, creating and sustaining massive social injustices inherent in our social and econo­mic structures based on caste, religion, gender and ascriptive bases. 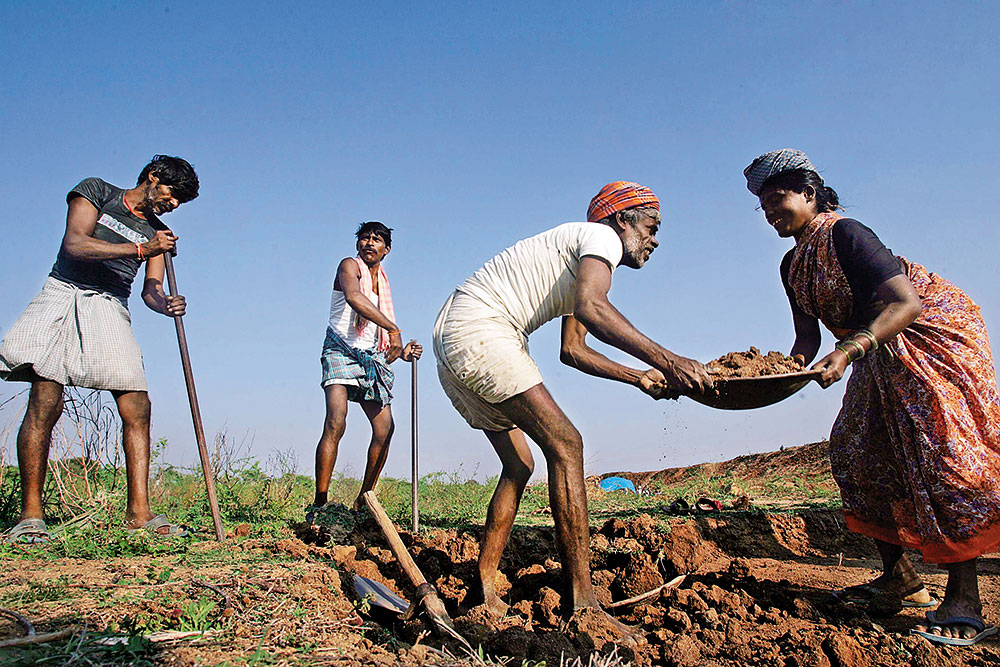 The glaring data needs to be comprehended alongside the major causes behind the high unemployment scenario. Firstly, it is the government’s economic policy, which has already been subjected to much criticism, both internally and outside the country. Simply put, the policies are not in sync with India’s social and economic reality, nor with the expected rates of employment and educational opportunities they need to generate. Secondly, today’s youth are aspirants who hope to work in better paying sectors like manufacturing and services, rather than agriculture and related sectors. There is nothing wrong with that as they want to attain economic mobility through better wage expectations. Let’s not forget how PM Modi criticised—not entirely without merit—UPA’s MNREGA in Parliament, on the ground that it only gave survival wages.

Thirdly, privatisation of the public sector and inf­usion of new technologies and capital by the private sector, may make industries more effici­ent, but capital and technology-intensive private sectors could undermine the social objectives of development—creation of employment. Public undertakings, with some exceptions, largely carried the dual aim of production and employment. This underscores that at least for a decade or two, India needs to create slow reforms in the public sector with simultaneous infusion of private capital in some strategic sectors. The government should consider apt management of this transition to serve both objectives, of production and employment. Fourthly, relatively poorer states have become victims of religious politics, undermining effective development and adding to the adverse employment situation.

(This appeared in the print edition as "The Jigsaw of Unemployment")