In Ayodhya, a craftsman works on a 15-feet stone slab with a hammer and chisel at the Mandir Nirman Karyashala of Shri Ram Janm Bhoomi Nyas. 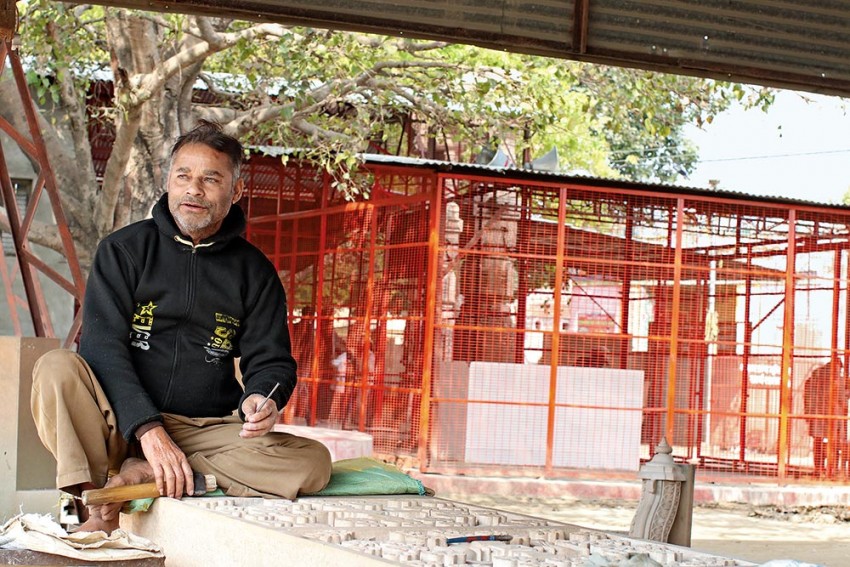 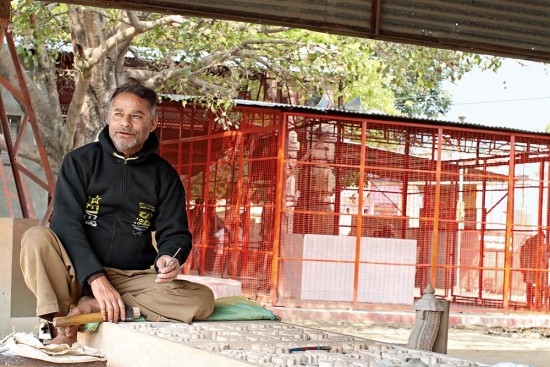 At 8 in the morning, clad in a black hoodie, a craftsman works on a 15-feet stone slab with a hammer and chisel at the Mandir Nirman Karyashala of Shri Ram Janm Bhoomi Nyas in Ayodhya. Massive stone slabs and bricks bearing the words ‘Jai Shri Ram’ occupy much of his workplace.

Rajnikant Bharatrai Sompura, 53, is working on a piece of stone that will someday, many hope, be used to build the Ram Mandir at Lord Ram’s purported birthplace. Seeking to resolve the decades-long dispute, the Supreme Court on March 8 formed a mediation panel in the Ram Mandir-Babri Masjid dispute case and tasked it to come up with a resolution.

“There was hope that the temple would be built but then we locked horns with Pakistan. The temple will remain on the backburner,” says Sompura. “The whole world wants the temple. I am a small labourer. Who cares about my views?”

The Karyashala is peopled with visitors across India. One man touches the stone, then raises the hand to his head in reverence. “Bahut dharm ka kaam kar rahe ho aap. Bada dhanyawaad aapka (You are doing a great service to Hinduism. My gratitude),” he tells Sompura.

Asked if he expects the BJP to build the mandir, Sompura says, “We all want the resolution in favour of the Mandir amicably.… The December 6 incident also happened. Nobody wants infamy.”

An unabashed supporter of PM Modi, he asserts: “He has started great schemes. If he stays for 15 years, the country’s face would change.”

Sompura hails from Dhrangadra in Gujarat. He has been in Ayodhya for the past five-six years.  “There are only five of us here. But we’ll get a thousand workers today if the order for the temple is passed.”

Sompura’s foremost concern is to find good matches for his two unm­arried daughters, who study in standards 10 and 12. From the monthly Rs 12,000 he makes here, he isn’t able to save much. He lost sight in one eye a few years ago, probably because of dia­betes. Long hours of work have led to back and wrist pain, and inhaling stone dust has led to breathing problems. Sompura worries about a major illness. “I’ll work so long as my eyes and hands work. Once they give up, I’ll go back to the village,” he says.