Music genre has helped young artistes in the Kashmir Valley to articulate the people’s fears and woes.

(We’re born in crackdowns, we die in curfews
They turned our homes into bunkers, and I’m digging graves)

In July 2019, a month before the abrogation of Article 370, Delhi’s Azadi Rec­o­rds released an 8-track debut album of rap artist Ahmer Javed, Little Kid, Big Dre­ams, in collaboration with critically-acc­laimed producer Sez On The Beat. Among people in the Valley, it imm­ediately triggered a bout of nostalgia for Roushan Ilahi aka MC Kas­hmir. In 2010, Ilahi’s I Protest, a tribute to civilian uprising and those killed in it, brought protest music to every phone and march in the Valley, at a time when Kashmir was witnessing mass-scale protests against killings of youngst­ers. People still recall its lyrics: I protest for my brother who is dead/I protest against the bullet in his head. I protest I’ll throw stones and never run/I protest until my freedom has come.

Ilahi’s sensational rap debut in 2010 as MC Kash put hip-hop front and centre in the mindspace of Kashmiri youth. Within a few years, the­re were around 50 rappers in the Valley. But he suddenly became inactive after 2016, leaving Kashmiri hip-hop orphaned. With MC Kash’s disappearance from the scene, a new group of singers emerged, who started rapping in Punj­abi. By then, hip-hop was big in the Valley, so they too got good social media traction.

Then, in 2019, came Ahmer Javed with his Little Kid, Big Dreams, giving a fresh lease of life to street music, once again in Kashmiri.

Song after song in Javed’s album deals with the impasse in Kashmir, from the 1990s to the present. They tal­k of the trauma of crackdowns, killings, militarisation, as well as the yearning and hope in the people. Javed’s message is clear—­a lot may have changed since 1990, yet everything looks to have remained the same.

(Youth look aged here
Here you have to beg for justice
The oppressor is usurping our rights and still, he is after us
If we speak the truth, we become Pakistanis)

The lyrics are from the song Kasheer, but Javed’s listeners claim every song has something that average Kashmiris can identify with.

ALSO READ: Cuts Like A Knife: Times When Hip-Hop Spoke Truth To Power 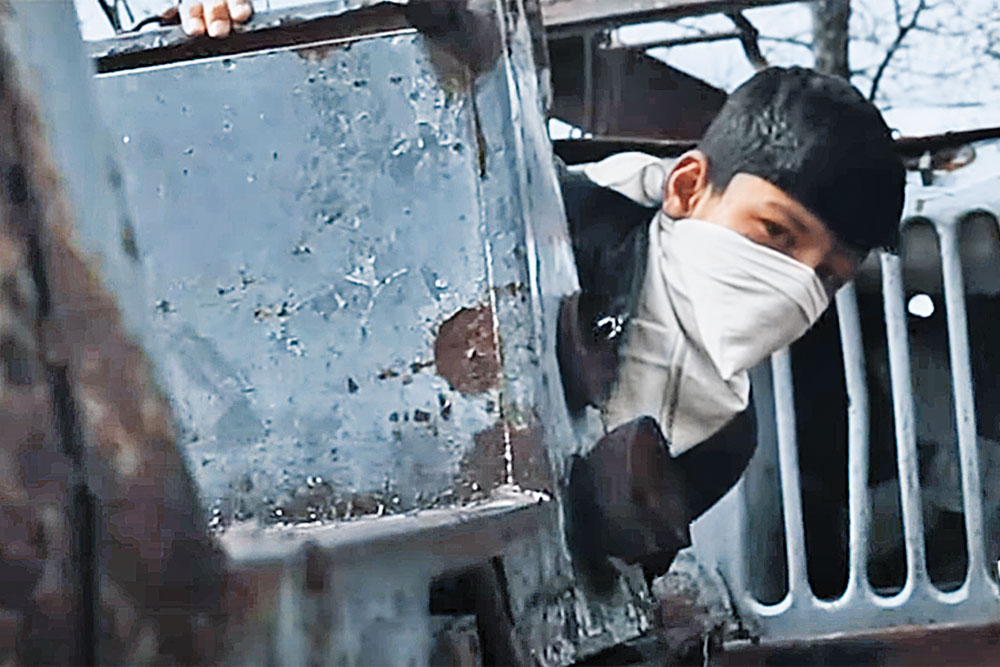 Damage, Inc. Screengrab from the video of Khoon Rezi

“I was vindicated in my decis­ion to record in my mother ton­gue,” says Javed, adding that Kas­hmiri is usually not well rec­eived by listeners, especially in rap. “Even in schools, speaking in Kashmiri was stigmati­s­ed,” he reminisces. But then, he says it was only when he started writing Kash­eer in Kashmiri that he felt his poetry flow.

“My lyrics were simple. I wanted to connect with the people around me, rather than going global. I also wanted to be truthful,” Javed says.

ALSO READ: Why I Rap: A Hip-Hop Artiste’s Journey From Bihar To Stardom

Later that year, he had gone to Delhi for work. When he returned home during last year’s lockdown, he started going on long, solitary walks. Suddenly, he began meeting young people—­“some very talented artistes among them”—during these walks along Jhelum Bund and Res­idency Road in Srinagar. Most of them were strangers, but drawn by music, they bec­ame friends qui­c­kly, and together, deci­ded to form a hip-hop community.

Along with Kafila, SOS and other rappers, they started making and recording new music. Fans named their project Kashir Nizaam. Soon, other rappers started switching from Punjabi to Kashmiri.

“Every one of us decided to produce more and more music,” says Arsalan Afreen, a 22-­year-old hip-hopper from Srinagar, who is known by his stage name Aatankki.

But why Aatankki? Afreen responds, “I studied in a boarding school outside the state. Like other Kashmiris, I was often taunted for being Kashmiri and called aantankki (terrorist) there. So, when I started writing rap lyrics, I dec­ided to adopt Aatankki as my stage name.” 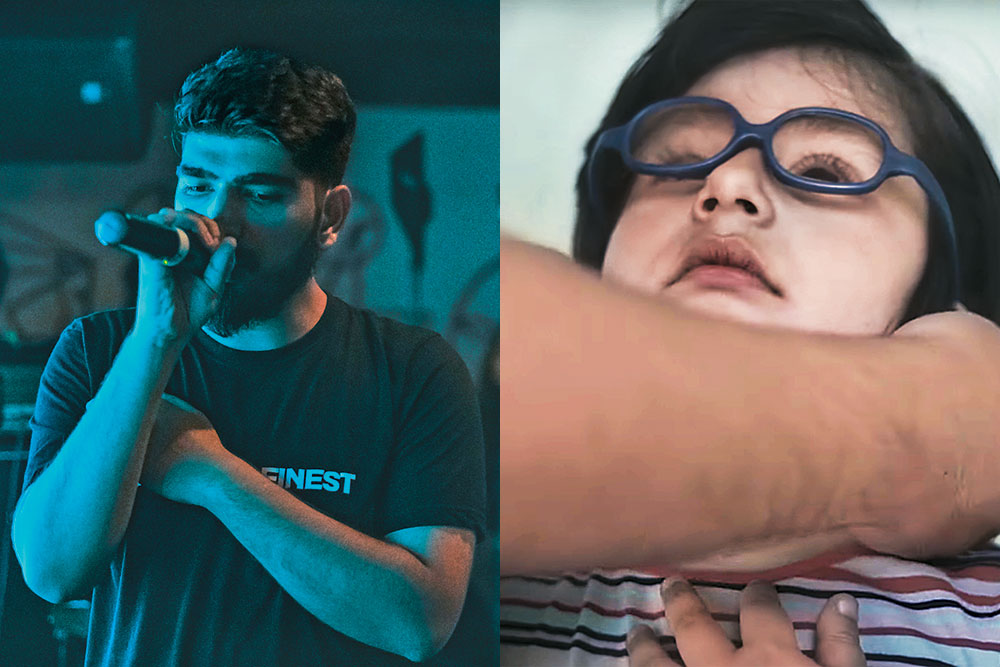 “When I raised my pen to write, I thought it was an act of duty,” he says.

Initially, Afreen’s colleagues would laugh at his stage name. But gradually, they’ve come to accept it. “There are many others who still get psyched out by it. But I have never faced any difficulty on account of it. Rather, I’ve faced problems because of my lyrics,” he says. Deeply inf­l­uenced by American rapper, songwriter and producer Duckworth (Kendrick Lamar), he says he can’t be indifferent to what’s happening aro­und him, and tries to reflect that in his lyrics.

He also says he owes a lot to Javed, as “he gave back the essence of hip-hop to Kashmiris”.

Along with fellow rapper Tufail Nazir, Aatan­kki’s next venture was Khoon Rezi (blood­shed). “It talks about the situation in the Valley after the abrogation of Article 370.” He says he recei­ved many calls after the release of this song, asking him to desist from this kind of music.

Undaunted, they next came up with SOS, which stands for “Straight Outta Srinagar”. Finally, in January this year, Aatankki was signed up by India’s biggest indie rap label Azadi Records. “If Aza­di signs you, it means you are producing quality music,” he says.

While MC Kash and Javed have always been politically charged in their lyrics, there are oth­ers who prefer to take a nuanced appro­ach, mostly to avoid police scrutiny. Javed, though, claims he’s being truthful rather than political, in his lyrics. “Our circumstances are such that hip-hop alone allows us to speak for the people, and above all, for ourselves. It is not our intention to make political songs. When you suffer so much inside, you give vent to your feelings. What your heart undergoes, you put it down in words,” he says.

“We’re just musicians. If we’re different, it’s because we write lyrics that are conscious of our reality. We’ve never claimed we’re going to change anything,” Javed says.

“We don’t feel like changing the world thr­o­ugh our music. But from our end, we are trying to be real about it. If we are talking about the current scenario, or the history of our region, that’s because it comes naturally to us,” says Javed. “And now, there’s a whole community of rappers doing this. It’s no longer individuals,” he adds.

ALSO READ: Hip-Hop’s Strongest Asset Is Its History Of Rebellion And Truth-Telling

But he has a word of caution for all. “I’m skeptical and optimistic at the same time, about hip-hop in the Valley. I’m optimistic because we lea­rn new things every day. I’m skeptical as I come from a place that’s in a mess. At the end of the day, if you are in trouble, it means you alone are facing it. No one will stand up for you. Out here, people don’t stand up even for their own,” he laments.

(This appeared in the print edition as "Rage Against the Motion")