Jammu and Kashmir is under President's rule and the government's bid to reach out to all the 4,483 panchayats has touched the common man but not the politicians 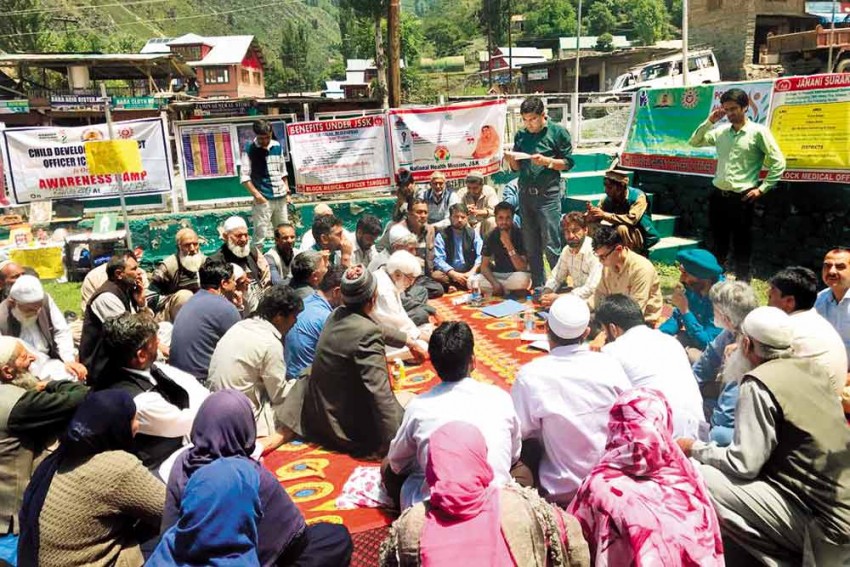 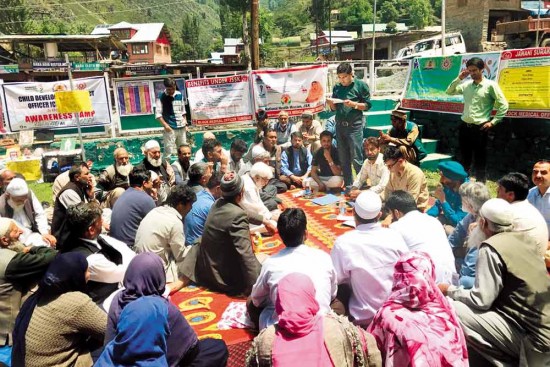 When a team of senior officers of the Jammu and Kashmir government crossed the Sadhna pass at 10,269 ft to work with panchayats of the area that falls on the Line of Control, they found people ready with a long charter of demands. Previously called Nastachun pass, it connects Karnah teh­sil of Kupwara district with the rest of the Valley. In January last year, an avalanche killed nine people here, ­including an infant. For long, residents across the Sadhna have been ­demanding a tunnel to rem­ain connected with the Valley during the snowed-out winter months.

The ancient temple of Sharada and the adjacent ruins of the Sharada university lie across the Kishanganga river, called the Neelum in Pakistan, in a small village named Sardi. A wooden bridge over the Kishanganga connects the area with Pakistan-occupied Kashmir. The residents walk up to a white line drawn in the middle of the bridge to meet each other.

“If the Sharda corridor opens for pilgrimage, it will open up new economic avenues. The area can become an example of border tourism if the tunnel is constructed at Sadhna for all-weather accessibility,” says J&K industries ­department director Mehmood Ahmad Shah, who had visited the area for three days with other senior officials under the state government’s flagship ‘Back to Village’ outreach programme, to understand the problems and potential in the area and report it back to headquarters. “We ­resolved small issues on the spot and have reported big demands such as the ­construction of the Sadhna tunnel to the government.”

Former legislator Engineer Rashid says there are officials posted in all villages across the state and the government knows the problems of villagers even in the remote regions. “If the tunnel at Sadhna pass hasn’t been built in all these decades, how can we expect it would be done now just because some officials have assessed it now and reported to the government about the necessity of the tunnel?” he asks. “Can officials who have not delivered over the years change by spending three or four days in the villages? Now that they are back, let us see whether they resolve the issues.”

“We are out of the scene due to ­President’s rule, and the vacuum is sought to be filled with such outreach by officials,” says a ­local politician.

Jehangir Hashmi, a senior official pos­ted in the civil secretariat, went to his home area of Ghat in Doda district of Jammu under the programme. He says he settled nearly 25 issues of various panchayats, facilitated the setting up of a toilet for girls at a middle school, and res­tored drinking water supply at the only higher secondary school in the area.

Arshad Ayub, another senior official, visited his village after a long time. “I was not on a nostalgia trip. I visited almost all the places in the area and listened to the demands of people. I met orphans, eld­erly people, school children and others. The people had great expectations from us and we had gone there to help them sincerely,” Ayub says.

The huge response generated by the Back to Village programme has baffled politicians. “I am extremely puzzled by the reaction they got from the people,” says a local politician, who didn’t want to be named. “Perhaps people had anger against the political class. Now that we are out of the scene due to prolonged President’s rule, the government wants to fill the vacuum with such outreach programmes by officials.”

A government spokesperson says the week-long Back to Village programme, which concluded on June 27, was a ­“resounding success.” During the programme, designated officers reached out to people in all the panchayats to assess their development needs, inform them about welfare schemes and take their feedback for the socio-economic transformation of rural areas. The programme was primarily aimed at 4,483 panchayats in J&K. Every panchayat was attended to by a gazetted officer.

According to Tanveer Sadiq, political advisor to National Conference working president and former CM Omar Abdullah, programmes like Back to Village could be a makeshift arrangement to reach out to people during President’s rule. “But it is dangerous to assert that it can replace an elected government and the assembly,” says Sadiq. “It is true that people responded warmly to officials visiting the villages. This is because the people want to be heard even when there is no elected government. But their warmth should not be turned into  an argument for rep­lacing the elected government.”