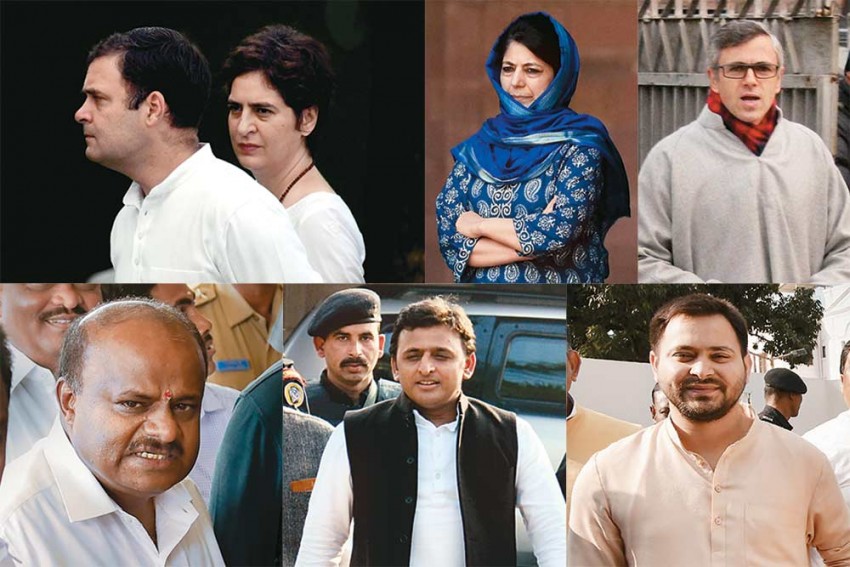 If furious outbursts on Twitter could help political parties bounce back from electoral ignominy, the shattered Opposition would have, by now, scripted a historic comeback. On a high from its unprece­dented 303 seats in the Lok Sabha polls, the ruling BJP, how­ever, shows no signs of complacency, drafting new members, flagging off yatras in poll-bound states like Maha­rash­tra, Haryana and Jharkhand, and wrecking rivals with a perpe­tual poaching campaign. By contrast, over three months after they were left with more than a bloody nose at the hustings, the many political heirs apparent—­Rahul Gandhi and Priyanka Gandhi Vadra, Tejashwi Yadav, Akhilesh Yad­av, H.D. Kumara­swamy et al— who, until six months ago, were projected by their respective parties as the leaders to look out for, have been largely missing from the scene.

Announcing his decision to quit the Congress presidency soon after the poll debacle, Rahul had said he would continue to fight the BJP “with 10 times more vigour”. The Congress wasted over two months trying to convince Rahul to reconsider his resignation and finally decided that his mother, Sonia Gandhi, must be the rightful inheritor of her son’s disasters. Over the past three months, Rahul’s only political outings have been to oversee relief work in his flood-­ravaged constituency of Wayanad in Kerala, a daylong stock-taking visit to Amethi, the family seat he lost to BJP’s Smriti Irani, and, more recently, leading a delegation of Opposition leaders to Kashmir (or more aptly, to the Srinagar airport from where he was sent back by the administration).

Priyanka, who many once saw as the panacea for her party’s deepening ­existential crisis, hasn’t done much better. Her July visit to Sonbhadra to meet families of the victims of a brutal case of caste violence and her subsequent incarceration by the Uttar Pra­desh administration at the Chunar Guest House presented an opportunity to build a statewide agitation on the issue of breakdown of law and order, but it was squandered.

In about two months, bypolls are due in nearly a dozen assembly segments across the state. “We are worse off now than we were before Priyanka joined,” says a senior state leader of the Congress. “Priyanka believes her flying visits will motivate workers. Often, even senior leaders in the state don’t know where she is. She needs to camp permanently in Lucknow.”

To learn a trick or two about political ­survival, Rahul Gandhi may want to dial DMK chief M.K. Stalin, who successfully tempered the 2G taint.

It isn’t just the Congress scions who have pulled a vanishing act in UP. Take former chief minister and Samajwadi Party chief Akhilesh, once the rising youth leader in UP who even had his own family members, including father Mulayam Singh Yadav and uncle Shiv­pal, jealous of his growing ­popularity. “It isn’t as if Akhilesh doesn’t want to aggressively rebuild the party, but he has no support from the family,” says a confidante of the SP chief. “The SP cadre is still loyal to Mulayam and Shivpal; Akhilesh isn’t getting any support, especially since the misadventure of his pre-poll ­alliance with (BSP supremo) Mayawati. Netaji (Mulayam) had rightly warned him that the alliance would benefit only the BSP. The SP won just five seats, while the BSP went from zero to 10. And then Mayawati broke the alliance.” Sources said Akhilesh has been ­planning a statewide campaign, but its success will depend on the support he gets from Mulayam.

In Maharashtra, Jharkhand and Haryana, where assembly polls are due in October-November, the Opposition is in a mess. Recently appointed Maha­rashtra Congress chief Balasaheb Thorat is busy dousing fires between factional heads Ashok Chavan, Sushil Kumar Shinde and Prithviraj Chavan (all former chief ministers) and stemming desertions. NCP chief Sharad Pawar seems more concerned about how he would effect a transition of power within his party, with daughter Supriya Sule and nephew Ajit Pawar both vying for the top job. Pawar’s ­relative and MLA, Ranajagjitsinh Patil, who recently quit the NCP to join the BJP tells Outlook: “It wasn’t an easy decision for me to resign, but the NCP has no political future.”

The story isn’t different in Bihar where assembly polls are just a year away. With RJD chief Lalu Prasad Yadav still in jail, the succession feud between elder son Tej Pratap and his sibling Tejashwi has wrecked the party. The more charismatic and articulate of the two, Tejashwi, had disappeared from Bihar’s political scene soon after his party scored a blank in the Lok Sabha polls despite a seemingly formidable grand alliance. He returned to Patna only a fortnight ago to take command of the RJD, but sources say it wouldn’t be an easy task given Tej Pratap’s insistence on having a greater say in party matters.

In Haryana too, while the ruling BJP continues to consolidate its voter base despite a shaky five-year rule under M.L. Khattar, the Opposition is busy settling personal, intra-party or family disputes. The Congress is worried that former chief minister Bhupinder Hooda and his son, Deepinder Hooda, will split to form their own party, while the Om Prakash Chautala clan has alr­eady been ripped down the middle. Chautala’s INLD is vying for the same Jat vote and constituencies it once held sway over with the Jananayak Janata Party, his grandson Dushyant Chautala’s splinter group.

If Rahul and Priyanka, Tejashwi and Akhilesh or the Pawars wish to take any lessons on rebuilding their parties, the inspiration is available from within their Opposition comrades. Rahul may want to dial good friend and DMK chief M.K. Stalin to learn a trick or two about political revival. Stalin almost single-handedly rebuilt his party and successfully tempered the taint of the 2G spectrum scam, which had plunged the Dravidian outfit into a seemingly insurmountable abyss just five years ago. In Jharkhand, the JMM’s Hemant Soren, despite his party’s wipe-out in the Lok Sabha polls that saw his father, Shibu Soren, losing a parliamentary election for the first time, has been vigorously reaching out to voters.

Both Hemant and Stalin may be active on Twitter, but neither sees support for their work on social media as an alternative to real field work. About time the other heirs apparent did the same bec­ause harping on dynasty alone can only have diminishing returns.

General secretary Priyanka is tasked with reviving the UP unit for the 2022 assembly polls. Rahul holds no party post. His challenges: shedding his ‘non-serious’ image and presenting himself as a credible ­alternative to the Modi-Shah duo; proving that the Congress can run without a Nehru-Gandhi at the helm; spelling out a clear Congress ideology.

The former Karnataka CM had said he would retire if the BJP toppled his coalition government with the Congress. While that may have been a calculated outburst as the BJP government’s stability is suspect, Kumaraswamy has the task of reviving his Janata Dal (Secular) that suffered heavy losses in the Lok Sabha polls. His father H.D. Deve Gowda too lost the Tumkur seat.

Mufti and Abdullah have been under house arrest in Srinagar since the end of J&K’s special status. Mufti’s PDP has been losing ground due to her brief coalition government with the BJP, while Abdul­lah’s National Con­ference was the de facto beneficiary. The BJP is amplifying their image as self-serving dynasts standing in the way of Kashmir’s progress.

The former Bihar deputy chief ­minister has been hardly seen since his RJD drew a blank in the Lok Sabha polls. As the obvious heir to father Lalu Prasad, who is in jail and ailing, Tejashwi’s biggest challenges are to rein in elder brother Tej Pratap, win the confidence of party seniors and rebuild the RJD’s ­grassroots support base before the assembly polls due next year.

The SP chief has been fending off attacks from within his family, inc­luding taunts from father Mulayam Singh Yadav. The alliance with Mayawati’s BSP failed miserably. Akhilesh has to re-establish himself as the SP boss, win over Mulayam, rein in motormouths like Azam Khan and rebuild the party. Bypolls to 11 assembly seats due in October-November will be his first test.