Home  »  Magazine  »  National  » Cover Stories  » Cover Story »  'Even A Buffalo Will Get Our Votes In Paswan’s Name': LJP Workers Are Confident Of Party's Win In Hajipur

'Even A Buffalo Will Get Our Votes In Paswan’s Name': LJP Workers Are Confident Of Party's Win In Hajipur

40-year-old Dharmendra Kumar Bhagat is eager to give his all to ensure the victory of Paswan’s younger brother, Pashupati Kumar Paras, LJP’s nominee from the seat. 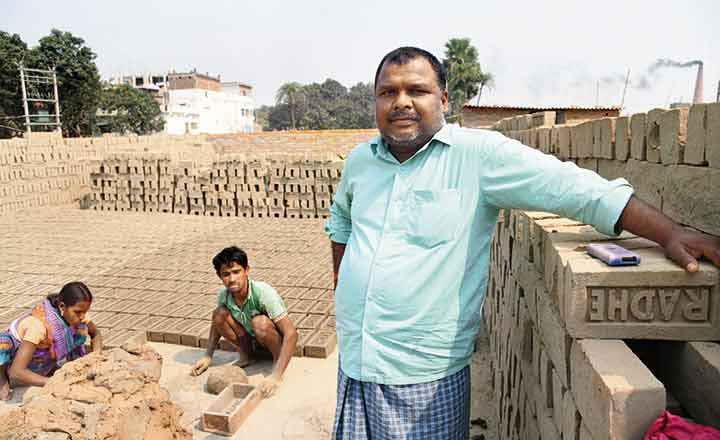 Photograph by Bimal Chunni
Giridhar Jha April 04, 2019 00:00 IST 'Even A Buffalo Will Get Our Votes In Paswan’s Name': LJP Workers Are Confident Of Party's Win In Hajipur

“It does not matter who the LJP candidate is,” declares Dharmendra Kumar Bhagat. “Even a buffalo will get our votes in Paswanji’s name.” The 40-year-old, unemployed man belongs to Kowari Bujurg village, which falls under the Hajipur (reserved) parliamentary constituency in Vaishali district, Bihar. Until a few years ago, he worked as a lorry driver with a beverage company. He now does odd jobs, but that has not made him bitter towards Ram Vilas Paswan, the LJP president who has represented the constituency multiple times since 1977. Far from it, he is eager to give his all to ensure the victory of Paswan’s younger brother, Pashupati Kumar Paras, the party’s nominee from the seat.

Bhagat may not have a steady job, but he says every household in his village has an employed member because of the LJP president. That is why he will, as he has always done, canvass for the party. “We select a team of 10 people for  door-to-door campaign in and around our village to ensure the LJP’s victory,” he says. “We don’t have to force or convince anybody. They do it on their own.”

Bhagat, who belongs to the Paswan caste, says his party chief hails from a penurious family and has always given due respect to the underprivileged from his constituency. “No person from Hajipur returns from Delhi without meeting him,” he claims. “At least 100 people from here visit him in the capital on an average day to seek his assistance, including for medical treatment. He not only helps them get admitted to AIIMS and other big hospitals to ensure free treatment, but also deputes his personal staff to look after them.” Bhagat recalls an instance when a senior party worker from his village underwent surgery for a tumour at AIIMS after Paswan’s intervention, which saved his life. “There are numerous such examples,” he adds. “Besides, he attends wedding ceremonies and other family functions at karyakartas’ homes when they invite him. Where can you find leaders like him?”

About 40 per cent of families in Bhagat’s village are Yadavs, traditionally supporters of the RJD. But he does not see that as an impediment. “Paswanji does not discriminate on the basis of caste and helps everyone. That’s why he has won elections so many times,” asserts Bhagat. “He recognises every person in the party, even the smallest of karyakartas. Many families,have been his supporters for generations.”