Ranjan Gogoi is grabbing headlines for all the wrong reasons. He made a telling impact when he became the Chief Justice of India but his reputation has taken a beating 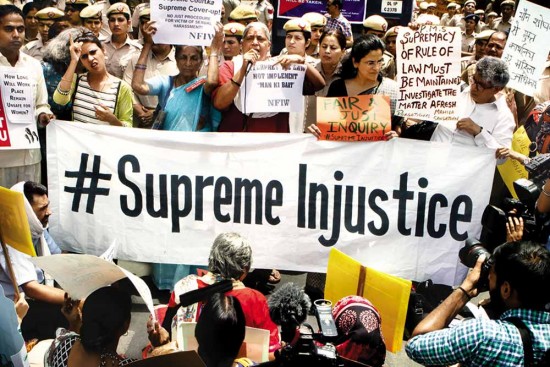 An unprecedented crisis has engulfed the ­Supreme Court and the office of the Chief Justice of India in the past few weeks. The ­allegation of sexual harassment against CJI Ranjan Gogoi, his initial handling of the complaint, the clean chit he got in the case from an ­in-house panel of three peer judges and the attempt at muzzling protests against the decision—none of these reconcile with the hopes Justice Ranjan Gogoi had raised 14 months ago when he wasn’t yet ­occupant of the highest chair of the country’s judiciary.

On January 12 last year, when four senior-most judges of the SC rebelled against the then CJI, Dipak Misra, to red-flag the “less than desirable things” in the apex judiciary, it was the participation of Gogoi that alarmed many. Unlike Justices Jasti Chelameswar, Madan B. Lokur and Kurian Joseph—the other judges at the presser—who were not in line to succeed CJI Misra, Gogoi had put his elevation as the next CJI at stake. He was singled out for praise for putting the credibility of the institution before personal interests.