A Gandhi never quits? But Rahul Gandhi as party president has not proved to be the galvaniser that Sonia was. 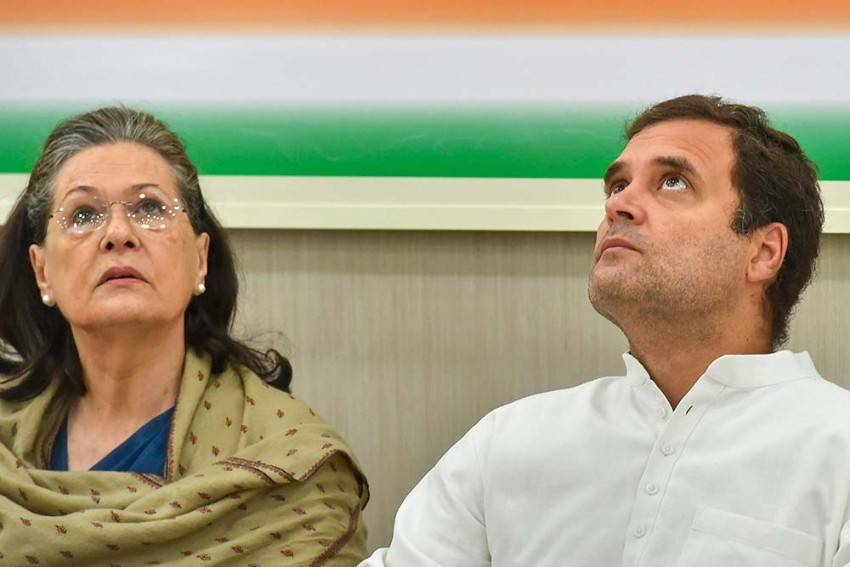 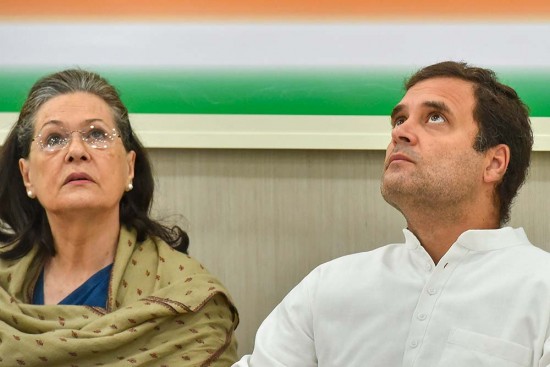 December, 1985. The Congress, a brute majority in the Lok Sabha on Prime Minister Rajiv Gandhi’s watch, was celebrating its centenary year at a plenary in Bombay—yes, that was before the city changed its name. And in a speech shocked party stalwarts at the session, Rajiv declared that Congress workers were “handicapped, for on their backs ride the brokers of power and influence, who dispense patronage to convert a mass movement into a feudal oligarchy”. For such “brokers of power”, Rajiv added, “the masses do not count” since “their thinking, or lack of it, their self-aggrandisement…their linkages with the vested interests in society… are wholly incompatible with work among the people”.

Nearly 35 years since those prophetic words, the Congress lies in tatters. The BJP’s Narendra Modi spared the “grand old party” 44 seats in 2014 and 52 in 2019. Yet, the Congress remains the “feudal oligarchy” that Rajiv had cautioned against. The abject failure at the hustings has been autopsied threadbare. Rahul Gandhi, the commander who led his men into the amb­ush, told his colleagues in the Congress Working Com­mittee (CWC), the party’s top decision-maker, his wish to step down as party president. A suitable replacement must be found, preferably within a month. Efforts by Congress leaders, including mother Sonia Gandhi and sister Priyanka Gandhi Vadra to persuade Rahul to withdraw his resignation have, so far, drawn a blank.

For the Congress, the deepening crisis is familiar territory, but no one’s willing to learn. Before 2014, when Sonia Gandhi took over as Congress president in 1998 after the brutal exit of Sitaram Kesri, she had spoken about dwindling numbers of her party in Parliament, the “serious erosion” of its support base among the electorate and the “danger of losing our central place in the polity of our country”. She talked about the “urgent need” to revive the Congress in states where the party had ceded ground.

Sonia failed to revive the Congress as its president in Uttar Pradesh, Bihar, Tamil Nadu, Odisha and West Bengal, but she adroitly steered the party back to power for a decade starting 2004. But then, the steady gains her party made started drifting away soon after 2012 when she began abdicating responsibilities in the electoral arena to make way for her son.

Even in 1998, Sonia, as Congress chief, spoke of dwindling numbers of the party in Parliament.

In 2014, when under Rahul’s stewardship of the Lok Sabha campaign the Congress touched its electoral nadir, the mother-son duo was back to add­ressing party colleagues on issues Sonia had spoken of in 1998. Both off­ered to quit—Sonia as president and Rahul as vice president—but the resignations were rejected. Then on, Rahul led the Congress from one disaster to another, but his formidable surname ensured that in December 2017, when he agreed to officially take over as Congress president, there was no one to challenge his ascension.

Now, while the Congress’s tally has gone up to 52 seats, its vote share has rem­ained the same pitiable 19.5 per cent. The BJP, for its part, won 303 seats—up from the 282 it won in 2014—and, in a majority of the states where it had a bip­olar contest against the Cong­ress, its vote share crossed the 50-per-cent-mark, a remarkable feat in India’s first-past-the-post electoral system. The Congress has been wiped out in 18 sta­tes and Union territories. The most def­i­nitive symbol of the Cong­ress’s demolition, of course, is Rahul’s personal defeat on the family turf of Ame­thi where he lost to BJP’s Smriti Irani.

That Rahul has been sulking and adamant on stepping down as Congress president is understandable. However, his anger seems misguided. So far, all accounts of what went on at the CWC meeting where Rahul announced his decision to quit suggest that while taking responsibility for the defeat, he, along with Priyanka, blamed party seniors for derailing the campaign. Much of their anger stemmed from two points—first, that the seniors did not back Rahul on his ‘chowkidar chor hai’ ass­ault on Prime Minister Modi and second, that several veterans (a clear reference to Kamal Nath, Ashok Geh­lot and P. Chidam­baram) pushed for tickets for their children and spent most of the time campaigning for them. 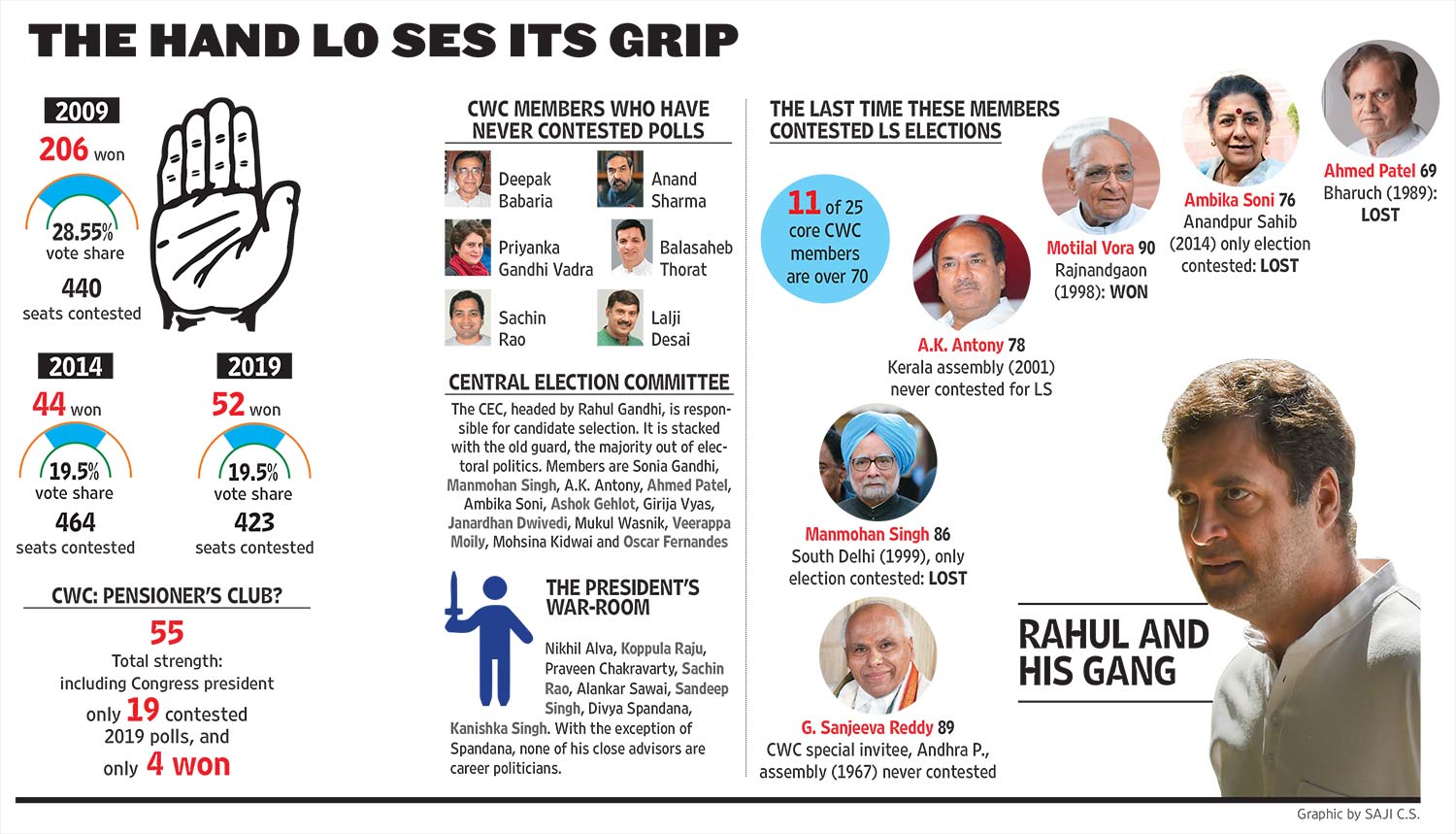 A CWC member, requesting anonymity, tells Outlook: “Rahul’s anger at the party’s defeat is natural, but there’s much more to the reasons for our rout…The BJP had turned the chowkidar barb to its advantage and, to be honest, voters simply don’t want to hear Congress attack anyone on corruption because of the record of UPA-II. It’s the same case when Rahul talks against dynasty. Modi’s naamdaar taunt was against the Nehru-Gandhi family, not against Gehlot or Kamal Nath.”

Several CWC members Outlook spoke to felt that the reasons for the Congress’s defeat lie in a spot that Rahul doesn’t wish to look into. “We positioned ourselves as better Hindus than Modi. Who were we trying to fool? Why would those who wish to vote for a Hindutva party choose us over Modi? We alienated those who had genuine reasons to vote against the BJP…the Dalits, tribals, backward castes and youth,” says a CWC member, who is also a former chief minister.

There is considerable resentment against the team of professionals that Rahul relies on to make his political strategies. “Just like Rajiv made the mistake of surrounding himself with professionals and technocrats who didn’t know a thing about grassroots politics, Rahul has done the same. If we told him that ‘chowkidar chor hai’ was not working, Praveen Chakraverty (Congress data analytics cell chief and Rahul aide) would show some survey to say we were wrong. If we said res­ponse to his comments and rallies on social media does not reflect larger public sentiment, people like Nikhil Alva, Divya Spandana and Kanishka Singh would convince him otherwise. And then we had Sam Pitroda going around foolishly questioning the Balakot strikes,” says a senior party leader who lost the recent polls.

A party veteran, who was once a Rahul confidante, stresses that there were several organisational deficiencies which collectively made the Congress electorally weaker. “Look at our general secretaries and state in-charges. A majority of them have zero electoral record. Most of them do not even command the respect of party colleagues. In states like UP, Odisha, Andhra and Bihar we have no organisation at all. How do you expect to mobilise workers?” he said.

Just like Rajiv, Rahul is surrounded by a group of technocrats who are far away from grassroots politics.

The Congress, under Sonia, was plagued by similar problems. But it survived electoral challenges. Sonia knew her limitations and the constraints on her acceptability as a mass leader. She made up for the deficiencies by her pol­itical astuteness. She reached out to disgruntled leaders, read the riot act when factional feuds compromised the party’s position and constantly engaged with existing alliance partners while looking out for new ones. Rahul, sources say, does nothing of the sort unless an election is approaching. That explains his failure at forming new alliances, keeping existing partners happy and preventing defections.

The entry of Priyanka as AICC general secretary months before the Lok Sabha polls, sources say, was Rahul’s idea of reviving his non-existent party in UP after alliance talks with Akhilesh Yadav’s Samajwadi Party and Mayawati’s Bahujan Samaj Party failed. Seen as the more incisive political alternative to her brother, Priyanka was smart enough to declare at the start of her political innings that reviving the Congress in UP will take time. After the Lok Sabha debacle, at least in public appearances, Priyanka seems most disturbed among the three Nehru-Gandhis by the rout. She isn’t keen on taking on the mantle from her brother and Rahul too has insisted that the new Congress president must “not be from the family”.

But, herein is the “feudal oligarchy” that the party has come to be. Publicly, every Congress leader has demanded that Rahul stay on as president. Sonia and Priyanka have reportedly told him that a “Gandhi never quits”. The real fear within the Congress is not of ano­ther debacle under Rahul’s leadership, but that the party would “derail without a Nehru-Gandhi engine”.

“The Nehru-Gandhi name has always kept the party together. Each time there has been an outsider at the helm, the party has collapsed. We saw it under P.V. Narasimha Rao and Sitaram Kesri. It is more important than ever that Rahul remains the president because unlike the BJP of Atal Bihari Vajpayee, Modi’s BJP is out to destroy us. The moment Rahul steps down, all factional leaders will be at each other’s throats while those of a lesser stature will go to the BJP for patronage,” 90-year-old Motilal Vora, the eldest CWC member, says.

Agreeing with Vora’s view, another senior leader says: “He should stay on and, as the CWC has suggested, he must restructure the party immediately. Get rid of the syndicate of Rajya Sabha members. The party needs to go back to the drawing board, reach out to the masses, and launch sustained campaigns on issues like unemployment and atrocities on minorities. A good way to begin could be a Chandra Shekhar like Bharat Yatra.”

The Congress’s summer of discontent began in May 2014 and it shows no imm­ediate signs of ending. Whether Rahul stays on as Congress president or really prevails in working as a “common Congress worker” is still unclear. What is clear though is that irrespective of Rahul’s decision, the challenges ahead for the Congress are seemingly insurmountable. Can it shed its baggage of old ideas, tired faces and, as Rahul said during his many interviews during the Lok Sabha campaign, give India a new narrative? Past experience says no, but will the future be different?