Home  »  Magazine  »  National  » Out Of Tune »  Charting Congress Fortunes In Rajasthan: How Long Can Ashok Gehlot Keep Sachin Pilot Away From Hotseat?

Charting Congress Fortunes In Rajasthan: How Long Can Ashok Gehlot Keep Sachin Pilot Away From Hotseat?

Not only differences between Ashok Gehlot and Sachin Pilot, the frosty relationship between Meenas and Gujjars have left Congress in turmoil in Rajasthan 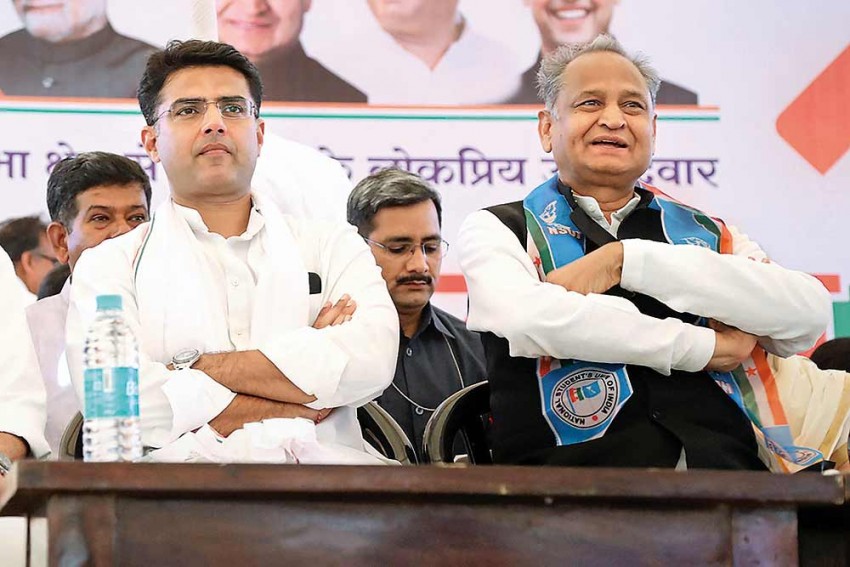 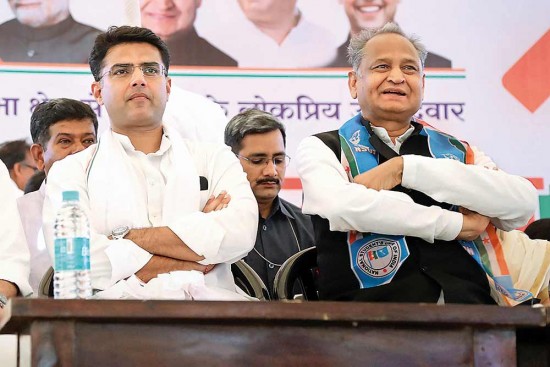 Even if the party remains in a mode of absolute denial, there have been enough evidences of discord between Rajasthan chief minister Ashok Gehlot and deputy chief minister Sachin Pilot, who is also the president of the state Pradesh Congress Committee (PCC). Every once in a while blisters of disagreements have erupted on the surface, either in the form of sly remarks from either of the two leaders, or direct sniping from partymen of their respective camps.

The latest in this continuum of verbal skirmishes are the comments of a Raj­as­than legislator, Prithviraj Meena, who said that Pilot should replace Geh­lot as chief minister. “We got the majority [in assembly polls] because of Sachin Pilot. Gehlot is not influential anymore. Jats, Gujjars, Meenas, everybody is angry. Who’s going to vote for us then?” said the Todabhim MLA to med­ia­­persons, adding that both times Gehlot went to the polls as CM, the party finished with 56 and 21 seats in the assembly.

A few days ago, Gehlot, who is otherwise very measured in his words, told a TV channel that Pilot should take res­ponsibility for his son Vaibhav Gehlot’s defeat from Jodhpur in the general ele­ctions. Clarifying on the remarks, PCC vice president Rajiv Arora says the comments are being misconstrued and there are absolutely no differences bet­ween the chief minister and his deputy. “I think what Gehlot meant was that nobody can take the responsibility for 24 seats (Rajasthan has 25 LS seats) and leave that of the remaining one seat to somebody else. Besides, both the leaders worked together and ran a very well-organised campaign,” Arora tells Outlook.

Gehlot has rarely made such direct accusations in the past. That he has given in to the impulse and made a personal attack might just prove that despite his much-touted composure, he might be edgy. He has good reason to be. Even after the Congress victory in Decem­ber 2018 assembly polls, suspense over the choice of CM remained for long, with speculation continuing till the very end. Party sources say that Congress president Rahul Gandhi was in favour of Pilot helming the state, while senior leaders such as Ghulam Nabi Azad, Ahmed Patel and even Sonia Gandhi int­ervened and ensured that Gehlot was chosen over him. The nightmarish results in Rajasthan for the Congress in the Lok Sabha polls, where the BJP won all seats, might have exacerbated any angst—and rivalry between the two—too.

Gehlot has outwitted other PCC chiefs in the past, but Pilot’s proximity to Rahul has made it tough this time.

Reasons other than staunch support from senior leaders are also attributed to Gehlot being picked as CM. One is that the Congress doesn’t have a resounding majority in the state. It now has 100 seats out of 200, but in December, when polls were conducted for 199 seats, Congress won 99. Twelve independent MLAs, considered close to Gehlot, had extended support to the Congress shortly after the victory. If Pilot were to be announced as the CM, the support of these candidates was deemed to be uncertain. Plus, it would have upset the MLAs from the Meena community, considering the fact that Pilot is a Gujjar, and Meenas and Gujjars have a fraught history in the state.

Gehlot has outwitted other PCC presidents in the past, but never let his remarks reflect his unease. In 1998, the Congress was led into the elections by a Jat stalwart, Parasram Madherna. Jats, hoping to have a Jat CM for the first time, had voted in droves for the Congress. However, they were in for a rude shock when Gehlot was made chief minister. Gehlot had been an MP five times by 1998 and had become close to Sonia Gandhi. Similarly, in 2008, he bested PCC president C.P. Joshi and became CM again. Both leaders were gradually reduced to positions of little significance in the party.

In an apparent jibe at Pilot in January 2018, Gehlot had said that anyone who becomes the PCC chief is projected as CM candidate by their media friends. The comments came at a time when Pilot was being considered a CM frontrunner by much of the media. “The PCC chief starts dreaming and projecting himself as next CM. It doesn’t augur well for the party,” he had said. Even though Gehlot might have outwitted PCC chiefs in a predictable pattern, the fightback from his principal opponent in the state seems a little difficult for him to crush.