The world’s tallest statue, of Shivaji Maharaj, will be the jewel in Maximum City’s crown

A 40-acre artificial island amid the blue waters of the Arabian Sea, off the Mumbai shoreline; a museum, helipad and an amphitheatre spread across this island. And standing in the centre and rising high into the skyline will be a 212-metre-tall equestrian statue of Chhatrapati Shivaji Maharaj, the 17-century Maratha warrior king. Intended to be the tallest statue in the world when completed, it will be twice the size of the Statue of Liberty and will displace the Spring Temple Buddha in China in height. To be named Shiv Smarak, the towering statue will stand as an assertion of power and dominance.

On December 24, 2016, Prime Minister Narendra Modi got into a Coast Guard hovercraft and rode the distance to the ‘spot’ earmarked for the Shiv Smarak. They stopped near an unobtrusive patch of gravel, which surfaces during low tide. Modi tipped a vessel of water collected from the rivers across Maharashtra and a handful of soil collected from the forts of Shivaji Maharaj, in a ritual known as jal pujan, praying to the deities to bless the spot of the fut­ure statue. But even before the jal pujan, controversies had started to surface—fisherfolk, environmentalists and others were all unanimous in their opposition to the proposed statue. However, the then Devendra Fadnavis-led BJP-Shiv Sena government went ahead with the plan.  To be designed by Ram V. Sutar, the maker of grandiose statues, the project is estimated to cost Rs 3,600 crore. However, the project is yet to take off as the incumbent Maha Vikas Aghadi government halted construction in January 2019 following the Supreme Court’s directives.

About 10 km from the Shiv Smarak is the site of another colossal statue under construction—a 137-metre statue of Dr Babasaheb Ambedkar—in Dadar, central Mumbai. To be known as the Statue of Equality, it is being pitched by the Maharashtra government as the third-largest statue in the world. The foundation stone was laid in October 2015 by PM Modi. Estimated to cost Rs 1,090 crore, the Statue of Equality is expected to be “the first thing air travellers to Mumbai will see”. The 12-acre plot will house a museum to showcase the life, times, work and achievements of Dr Ambedkar, the Father of the Constitution. This memorial will be linked to Chaityabhoomi, the place where the leader was cremated and is a revered place of pilgrimage for Buddhists and Dalits in India. For the record, a bust of Ambedkar at Bindu Chowk in Kolhapur—in western Maharashtra—inaugurated on December 7, 1950 is the world’s first statue of the Dalit leader.

In the past, a number of Ambedkar statues across the country, including Maharashtra, have been desecrated or attempts have been made to defile them. In many places, these statues have a protective cage around them which, in a way, den­otes clipping of the aspirations of the Dalits. In many cases there has been a failure to apprehend the miscreants. So as a solution, Ambe­dkar’s statues have gone behind protective cages. A Mumbai-based historian points out that post-1990s, which was the centenary year of the leader, many statues of Ambedkar were built and continue to be built across the country. “They have led to debates over the use of public spaces. The statues of Ambedkar outnumber any other in India. Post-1990s there has been a strong emergence of the Dalit movements throughout the country. Dr Ambedkar is the symbol of the Dalit identity, the Dalit assertion of power,” the historian adds.

But can Mumbai be complete without a statue of Balasaheb Thackeray, the founder of the Shiv Sena and the father of the incumbent Mahar­ashtra chief minister Uddhav Thackeray? In Colaba in south Mumbai, is the Syama Prasad Mookerjee Chowk and on a landscaped traffic isl­and here stands a nine-foot-tall statue of Thac­keray—the only one of the man who shaped the state’s politics, and is known by the moniker ‘Hindu Hriday Samrat’. Though numerous hospitals, roads and flyovers have been named after Balasaheb, no statue had been built of the leader till this 1,200-kg bronze figure was unv­eiled on January 23, 2021 by Uddhav Tha­ckeray, eight years after the patriarch’s death. His bronze ref­lection is clad in the traditional kurta-pyjama with an angavastram resting on his shoulders. His trademark thick spectacles adorn his smiling face and the familiar rudraksh mala lies draped on his neck. The opening lines of Thackeray’s speeches “Jamlelya majhya tamam Hindu bandhavano, bhaginino ani mat­ano” (All my Hindu brothers, sisters and mothers gathered here), have been inscribed on a plaque at the bottom of the statue.

Designed by Shashikant Wadke, the statue has Thackeray with his hands raised in the air, which was his “signature pose”. It is built at an estimated cost of Rs 100 crore. Wadke (74), who lives in Kalanagar where the bungalow of the Thackerays, ‘Matoshree’, is located, has also des­igned the statues of Keshav aka Prabhodankar Thackeray (Balasaheb’s father) and a bust of Meentatai (Balasaheb’s wife). After going through 150 photographs and an equal number of videos of the late Shiv Sena founder, Wadke started work on the statue in 2019.

ALSO READ:  Statues And The Construction Of Memory

Though statues—big, tall and large—are being built across India, there is a glaring gender disparity in the choices made. Discounting the statues of Mayawati that were constructed by the Bahujan Samaj Party leader herself, there are hardly any statues of women leaders in India in general, and Maharashtra in particular. Though small busts can be found in some institutions, full form statues are rare. 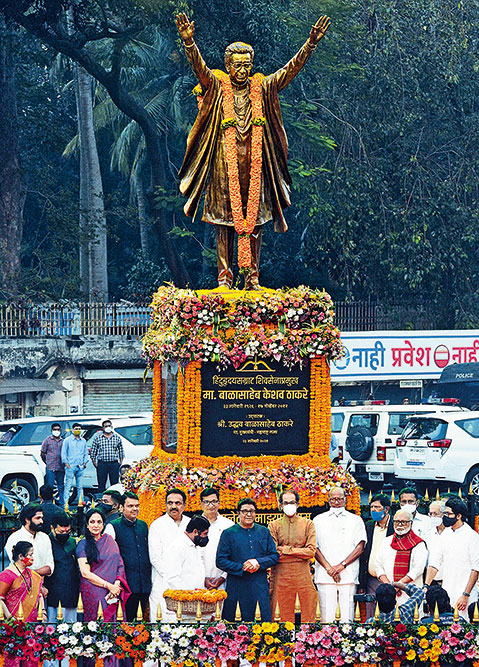 Maratha icon The only statue of Balasaheb Thackeray in Mumbai

The equestrian statue of Rani Laxmibai of Jhansi, at the Bal Gandharva Chowk in Pune is probably one amongst the few statues of woen across Maharashtra. A leading figure of the rebellion of 1857, she became a symbol of the resistance to the British Raj. Cast in bronze, she is depicted astride a horse with her inf­ant son tied to her back with a cloth harness. The sword held in her right hand is raised, a dep­iction of her valour. This statue portrays Rani as a beautiful woman with well-proportioned features. She wears a flowing kurta, churidar and mojris on her feet. Though in paintings, Rani Laxmibai is shown wearing the traditional Maharashtrian nine-yard (nauwari) sari even when astride a horse, in statues she adorns the kurta-churidar ensemble.

According to a faculty member at the J.J. School of Arts in Mumbai, who didn’t want to be named, Rani Laxmibai is considered an “ungendered subject”—neither male nor fem­ale. “Her statues are astride a horse, with a sword in her hand which shows valour which is neither male nor fem­ale. Making a statue of any other fem­ale leader will be difficult. The male statue is easy to make. If a female statue goes wrong, the backlash will be severe,” says the faculty member.

Though late Prime Minister Indira Gandhi was a towering political personality, there are no statues of her in Maharashtra. Her photographs hang in Congress offices, but it is the statue of late Prime Minister Rajiv Gandhi which has been installed within the Cooperage Grounds in south Mumbai. “Indiraji is associated with the Emer­gency in India. When everyone equates the Emergency as a painful and revengeful period in post-Independenc India, a statue of Indiraji will not be acceptable,” says a former Congress chief minister who has been close to the Gandhis.

For Dr Ravinder Kaur Cheema, the head of the History department at the Guru Nanak Khalsa College in Mumbai, the gender disparity is a mistake that should be rectified. “Politicians are obsessed with statues but they rarely celebrate the achievements of women stalwarts. There are some busts in educational institutions but these are not many. We talk of empowering girls and then deny them female role models. Build statues of women, let them stand tall too,” Cheema tells Outlook.

Jaiprakash Shirgaonkar, 70, is a second-generation statue maker. Though he makes a variety of statues at his workshop in Andheri, Shirgaonkar is credited as one of the biggest ind­ividual makers of gigantic statues of Shivaji Maharaj. “I started learning the art from my fat­her when I was 14. In addition to all the other statues I have made for the domestic and international markets, I have made 36 gigantic statues of Chhatrapati Shivaji Maharaj. In 2003, Balasaheb Thackeray had inaugurated the Shivaji Maharaj statue at the Mumbai airport,” Shirgaonkar says.

He says that statue making is not merely about casting moulds, it is about getting the expression right. “I study the history of the person. It has to be a thorough study. I look at visuals, texts, listen to narrations from peo­ple and every material I can get my hands on when I am commissioned a statue. This helps to get an idea of the person, his features, clo­thes and more importantly the exp­res­sions. As we age our expressions change,” Shirgaon­kar adds. It takes him over a year to make a large statue. Agreeing that statues of women leaders are rarely commis­sioned by the governments or civic bodies, Shir­ga­onkar feels this trend may not change any time soon.

(This appeared in the print edition as "Tallest Of Them All")