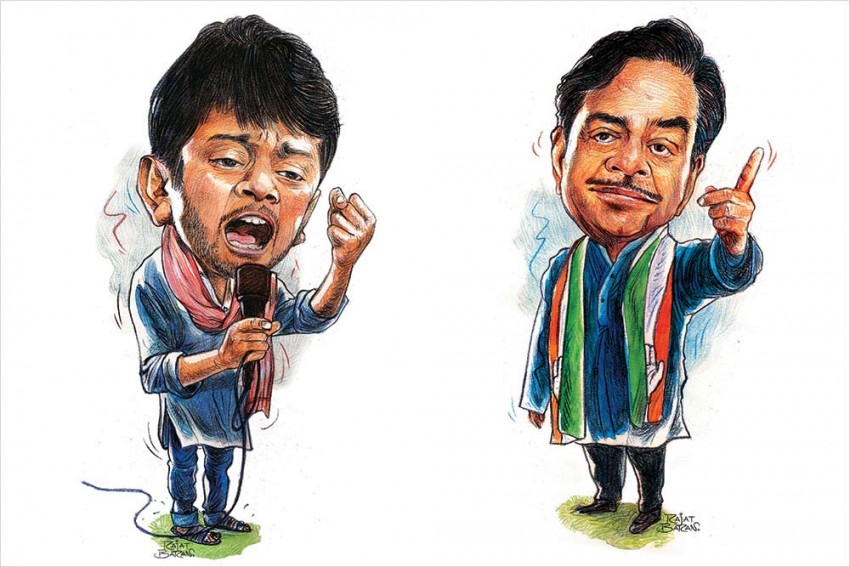 Illustration by Rajat Baran
Giridhar Jha May 24, 2019 00:00 IST Bahari Not Bihari - Why BJP-JD(U) Jugalbandi Left RJD-Congress Out of Tune

The Modi juggernaut steamrolled the much-touted Maha­gathbandhan in Bihar and Jharkhand, demo­lishing caste castles, throwing age-old poll equations out of the window with brute power to help the NDA register a thumping majority in the two states. Of the 54 seats (40 in Bihar and 14 in Jharkhand), the BJP-led alliance won 51, leaving its rivals in tatters.

In Bihar, where caste factor has held the key to success over decades, the NDA virtually faced no contest from the RJD-led alliance, which comprised a motley group of caste-based parties such as the Rashtriya Lok Samata Party, Hindustani Awam Morcha (Secular) and Vikassheel Insaan Party along with the Congress. However, this seemingly formidable alliance failed to win any seat except the minority-dominated Kishanganj, which was once again retained by the Congress. No other ally, including the once-formidable RJD, could open its account.

For the first time since its ­inception, Laloo Prasad Yadav’s party, which had swung many a poll in its favour on the strength of its traditional Muslim-Yadav (MY) vote bank in the past, won’t have an MP in the new Lok Sabha. Among its major losers were Laloo’s eldest daughter Misa Bharti, Sharad Yadav and all its sitting MPs. Many Cong­ress stalwarts such as Meira Kumar, Tariq Anwar, Ranjeet Ranjan and Shatru­ghan Sinha tasted defeat, too. Founders of RLSP, HAM(S) and VIP, Upen­dra Kushwaha, Jitan Ram Manjhi and Mukesh Sahani ­respectively, bit the dust. Kushwaha, in fact, lost both seats (Karakat and Ujiarpur) he had contested from.

All hopes of the Left for its long-awaited revival in Bihar were also dashed with the ­defeat of its young leader Kanhaiya Kumar, who was fielded by the CPI from Begusarai, once known as the Leningrad of Bihar. The former JNUSU president lost to BJP’s firebrand leader Giriraj Raj by a margin of over 4 lakh votes in a grunge fight.

The NDA candidates, in contrast, had a dream run. Barring JD(U)’s Syed Mahmood Ashraf who lost to Congress nominee Dr Mohammad Jawed in Kishanganj, the alliance won the rest of the 40 seats, eight more than its 2014 tally of 31. While the BJP (17) and Ram Vilas Paswan’s Lok Janshakti Party (6) secured all their seats comfortably this time, chief minister Nitish Kumar’s JD(U) won 16 of its 17 seats, 14 more than its tally in the previous general elections when the party was not part of the NDA. Among the notable winners from the BJP were Union ministers Ram Kripal Yadav, Raj Kumar Singh, Giriraj Singh, Ashwini Kumar Chaubey, Radha Mohan Singh and Ravi Shankar Prasad, who defeated Shatrughan Sinha in the prestigious Patna Sahib constituency. Incidentally, of the total six winners from the LJP, two (Ramchandra Paswan and Pashupati Kumar Paras) happen to be party president Paswan’s brothers while another (Chirag Paswan) is his son.

The resounding victory of the NDA once again reaffirmed the credentials of the JD(U) and BJP as “unbeatable allies”, as they have never lost any parliamentary or assembly polls together since they ousted the RJD from power in Bihar in 2005. The strength of the Mahagathbandhan, however, was greatly depleted all through the poll campaign because of the absence of Laloo, who remained confined to a Ranchi prison-hospital because of his conviction in the fodder scam.

In adjoining Jharkhand, the NDA had a landslide victory with 12 seats in its kitty. While the BJP won 11 of the 14 seats in the state, its ally, the All Jharkhand Students Union (AJSU) bagged one. Their rivals, the Congress and the Jharkhand Mukti Morcha of the Mahagathbandhan could win only one seat each. JMM founder Shibu Soren, an eight-term MP for Dumka, and former chief minister Babulal Marandi of the JVM(P) were among the prominent losers.

What do Priyanka Gandhi, Smriti Irani and Mamata Banerjee have in common? They all have encountered abuse on Twitter. While people face harassment on the micro-blogging platform regardless of gender, women have to deal with rape threats, death threats and stalking. To quantify the scale of gendered abuse, Amnesty International launched Troll Patrol. Their study of 778 women politicians in the US and UK ­revealed that they received 1.1 million ‘problematic’ or ‘abusive’ tweets in 2017—roughly one every 30 seconds. While females of all political affiliations experienced harassment, black women were 84 per cent more likely to be mentioned in abusive tweets than their white counterparts. Amnesty India is initiating a similar study to analyse the tweets 100 female candidates received before, during and after the Lok Sabha polls.

Strongly condemn the language used on the social media against @sushmaswaraj Ji . She is a senior politician. We must respect each other and must never indulge in any form of verbal abuse

@Razer78 u abuse me u get blocked