Home  »  Magazine  »  National  » News/Assam »  Who Is An Assamese? More Questions Than Answers

Who Is An Assamese? More Questions Than Answers

In the wake of the National Register of Citizens, any exercise to define who is a native can open a Pandora's Box in a state inimical to 'immigrants' 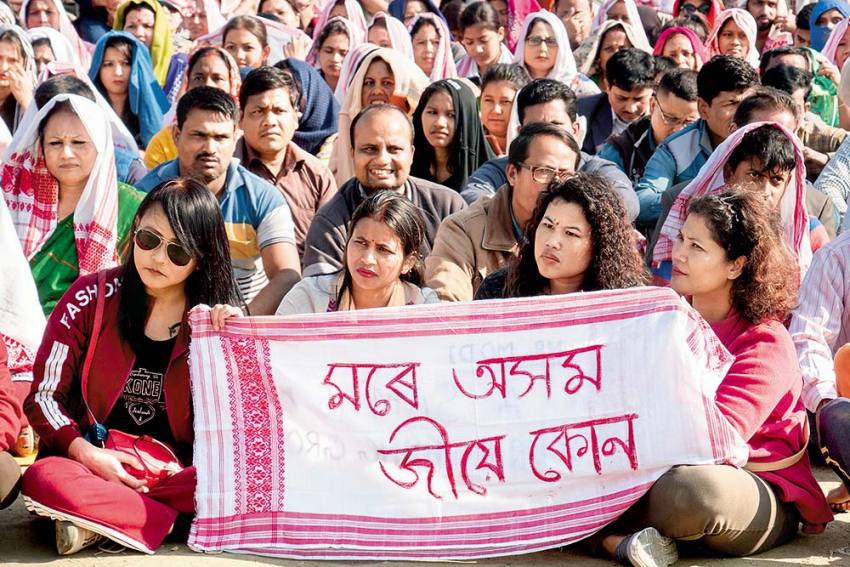 Identity Crisis
Protests against CAA in Assam has been raging for weeks
Photoghraph by Samsul Huda Patgiri
Sadiq Naqvi February 05, 2020 00:00 IST Who Is An Assamese? More Questions Than Answers 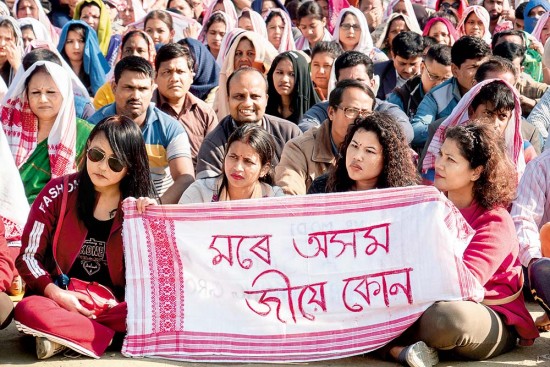 “Constitutional, legislative and administrative safeguards, as may be appropriate shall be provided to protect, preserve and promote the culture, social, linguistic identity and heritage of the Assamese people.”

Last month, Assam minister Himanta Biswa Sarma set the cat among the pigeons when he quoted the Jamiat Ulema-e-Hind as claiming that the original inhabitants of the state were Dravidians who were driven out of the state by “Tibeto-Burman people and Mongolian tribes”. The Jamiat’s claim implies that the Ahoms and the Bodo-Kacharis—among the earliest settlers in the Brahmaputra Valley—were “migrants”. In a state where “identity” dominates the political discourse and the long-running indigenous-vs-migrant battle rages on, the theory is outrageous for most people of Assam; the claim strikes at the very root of Assamese identity, shaped primarily by 600 years of Ahom rule.

Yet, the question remains: Who is an Assamese? Or an Oxomiya, as the Assamese word goes. A panel appointed by the home ministry is likely to give an answer when it submits its recommendations to the Centre by mid-February. Defining an “Assamese” will also set the stage for implementing a vital clause of the 1985 Assam Accord—one that will grant constitutional safeguards for Assamese language and culture, but more importantly, ensure land rights for those identified as natives of the state.

But defining an Assamese is not an easy task in a state where the exercise to update the National Register of Citizens (NRC)—an official record of citizenship—threw up more questions than ans­wers; that the NRC was rejected by its very proponents, the BJP and the All Assam Students’ Union (AASU), is just a pointer to the complexities surrounding the issue of illegal immigrants. For the BJP-led Union and Assam governments, def­ining an Assamese and implementing Clause 6 to the “satisfaction” of the Assamese-speaking people is important to douse inflamed passions in the wake of the Citizenship (Amendment) Act, which many believe will only add to the burden of “illegal migrants” in Assam.

“If the recommendations are acceptable (to all) then I think it will help the situation to be comfortable… otherwise I don’t think the situation will be peaceful,” says Nagen Saikia, a former president of Asam Sahitya Sabha, the state’s largest literary body with enough clout to shape public opinion. “(But) I don’t agree with the view (that there is no consensus on who is an Assamese). Speaking Assamese and who think themselves to be Assamese, these are two things. Tea garden people think themselves to be Assamese. Even in char areas, some people call themselves Assamese, their mother tongue is Assamese,” he adds.

What could rile many in the state—esp­ecially those who feel victimised by ethnic nationalism—is the base year that will be adopted for defining Assamese. The Assam Accord had set 1971 as the cut-off year for determining citizenship. Many now feel that the 1971 cut-off year has allowed many “illegal migrants” to become Indian citizens. When the final NRC left out 1.9 million people, the AASU felt the number was too small. Many are advocating 1951 as the cut-off year for Clause 6. Three members of the panel are said to have given a “near consensus” on 1951. 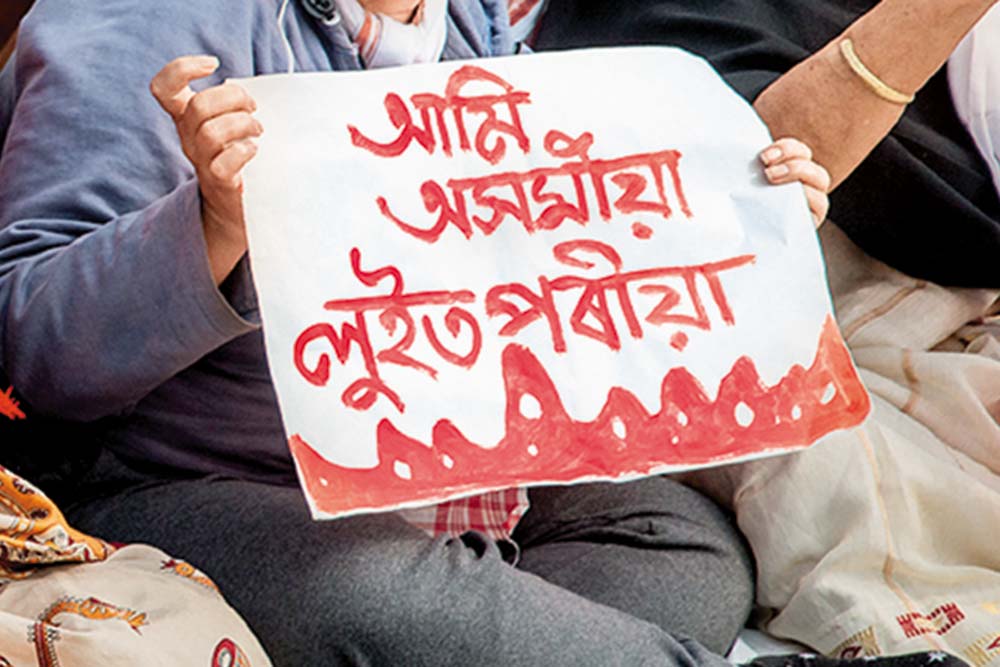 Photoghraph by Samsul Huda Patgiri
‘Assamese’ is not easy to define in a state where the NRC exercise threw up more questions than answers.

The All Assam Goriya Moriya Yuva Chatra Parishad, a student organisation representing indigenous Muslims, wants the cut-off year to be 1826, the year when Burmese invaders ceded present-day Assam to the British. “If the cut-off is 1951 then immigrant Muslims who came in will get all the benefits. It is the immigrant Muslims who hold political power in the state now,” says Mainul Haque, the general secretary of the parishad. Haque is not alone. A forum headed by pro-talks ULFA leader Anup Chetia also demands 1826 as the base year.

The Bengali-speaking fear the worst. Amrit Lal, a member of the All Bengali Oikyo Mancha, says they have no problem with 1971. “We also respect the Assam Accord. But if the base year is 1951, members of our community will be in trouble,” Lal adds. A large section of the Bengali Hindu community came in several waves of migration from East Pakistan since Partition. “People who are living in Assam are Assamese. How will you def­ine Assamese otherwise? People have come here, done hard work to establish themselves. Now they fear about their land and their property,” Lal adds. What they fear most is the possibi­lity of being caught in a documentation quagmire like during the NRC update, a controversy-ridden exercise.

Groups representing the Karbi and Dimasa tribes have raised objections, saying they don’t fall under the category of Assamese people. They are demanding separate reservation under Clause 6. “Tribals are tribals and indigenous are indigenous. You cannot say Barak Valley Bengalis are not indigenous. Anyone who speaks Bengali is not a Bangladeshi. Indigenous means son of the soil, a nat­ive. Assamese Muslims are indigenous, Barak Valley Bengalis are sons of the soil. As are the Gorkhas who have been living here for ages…” a member of the panel asserts. 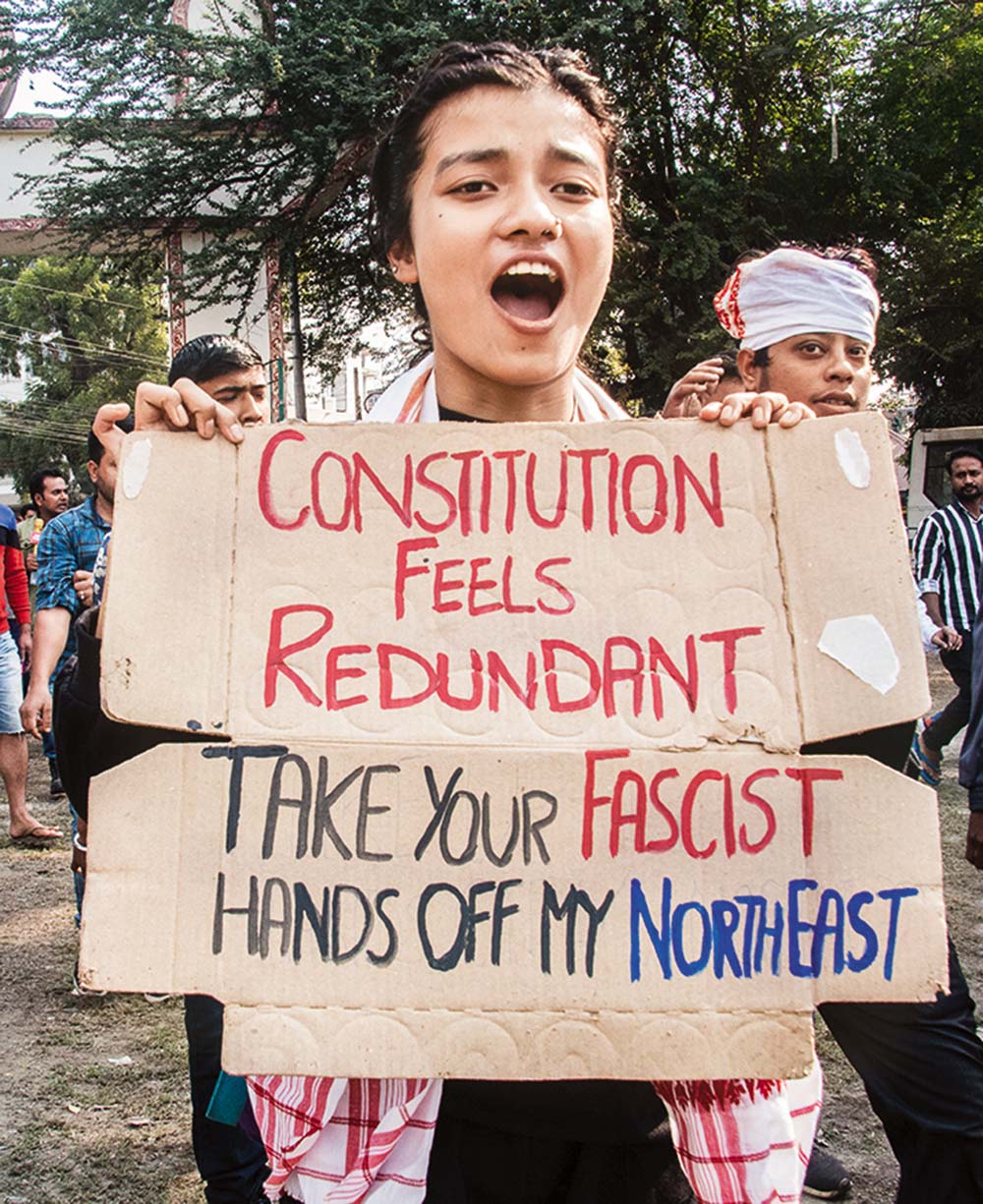 The 1951 census report had a very loose definition of an indigenous person as someone who is living in the state of Assam and speaks any of the dialects or languages. As for the definition of “Assamese”, several attempts in the past have eluded a consensus. A simgle-member panel of former assembly speaker Pranab Gogoi had in 2015 arrived at what is now argued as the most acceptable definition.  “Indigenous people shall be considered as Assamese people of Assam. So, for this, we are to proceed with the time limit of the year 1951. Accordingly, the National Register of Citizens of 1951 is to be accepted as the base year,” said Gogoi, who died recently.

Five years on, it seems it is this definition which is going to be again pushed. “The answer lies in the Assam Accord. If you see the difference between the rest of the country and Assam when it comes to citizenship you will get the answer,” a member of the Centre-appointed committee says. The AASU, for one, is quite clear about its demand. “The spirit is clear. We have taken the load till 1971, therefore, Clause 6 for us,” says Samujjal Bhattacharyya, the AASU chief advisor and a member of the committee. “The Pranab Gogoi committee report can be a basis,” Bhattacharyya adds.

A bureaucrat who was associated with the NRC exercise says the 1951 NRC was only available for 80 per cent of the state. The NRC update had relied on a clutch of other documents, too, till March 25, 1971. “It will be impossible to verify a lot of people if 1951 is made the cut-off year,” the bureaucrat adds.

Hafiz Ahmed of the Char Chapori Sahitya Sabha, a body representing Bengal-origin Muslims of Assam, makes the same point. “Without any definition, they are using the word ind­igenous. Assam Accord talks of Assamese and people who identify themselves as Assamese should be inc­luded,” says Ahmed, who is a PhD in Assamese language. Last year, Ahmed was among 10 people named in a police FIR for allegedly promoting social enm­ity for their poetry in their native ‘Miya’ language. The ‘miyas’ are mig­rants who settled in Assam’s riverine areas and are often reviled as “Bangladeshis” in a state where fear and loathing of the “outsider” runs deep.

But the question still begs an answer: Can a Miya be an Oxomiya too?

Indian Muslims: Us, Them And A Common Ground