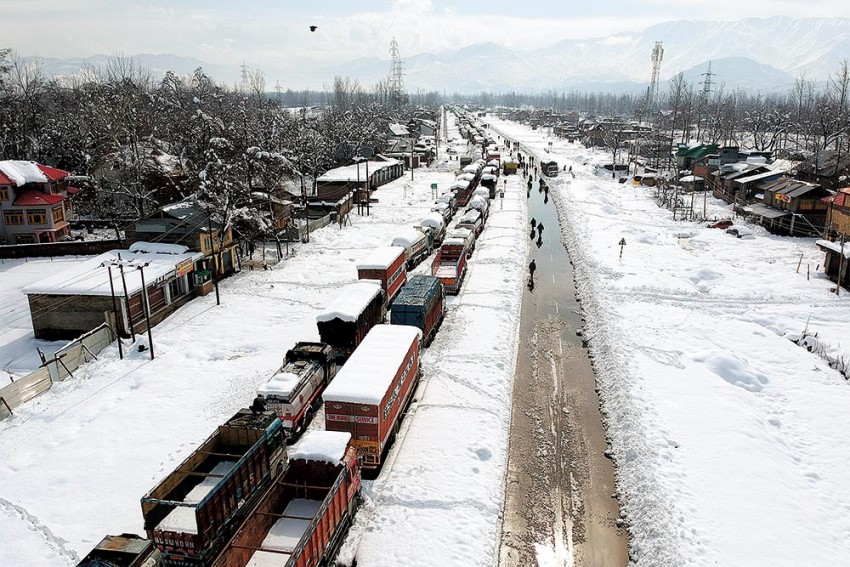 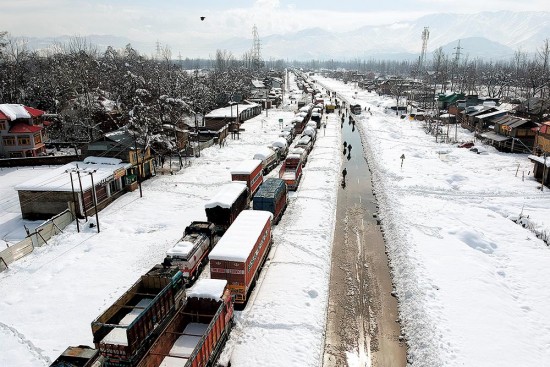 On February 11, Kewal Singh, a 53-year-old truck driver from Punjab, entered his sixth day of being stranded on the Srinagar-­Jammu National Highway at Qazigund. “We don’t know when the road will open,” he says. Singh’s fellow drivers say two of their colleagues fell seriously ill on the night of February 10 and had to be taken to hospital. The locals have come forw­ard to help, bringing along water to offer the thirsty. “But how long can they do it? This looks like unending trauma,” says Kashmira Singh, anot­her driver from Punjab. Pointing out that the highway is becoming more and more unpredictable by the year, Kewal adds: “The condition is just not improving. Now you don’t know when you’ll find the road closed and how long it would be before it reopens.”

Near the other end of the road, at Udh­ampur in the plains of Jammu, drivers say they have been stranded for six days. “Our vehicles are all parked on one side of the road, but the police, instead of helping us and providing some drinking water, are harassing us,” complains a truck driver, who doesn’t wish to be named.

On an average, around 1,200 trucks and as many fuel tankers, besides 1,000 vehicles ferrying passengers, ply on the Srinagar-Jammu highway on a routine day. The numbers increase during the ‘fruit season’, when around 1,000 trucks laden with apples and other fruits move out of Kashmir daily. And then there are over 500 vehicles of government forces on the road every day. Nearly 7,000 vehicles cross the Banihal toll post on an average day. No wonder, frequent closure of the road plunges the Valley into a crisis.

Political parties in J&K are seeking the defence ministry’s assistance in airlifting passengers stuck on the 300-km highway. Rockslides hitting the road again on February 11 at Panthal in Ramban ended all hope of the road opening that day, and Kashmir’s divisional commissioner iss­ued a circular asking fuel stations to sell only three litres of petrol a day for each vehicle and no more than 10 litres of diesel to commercial vehicles. Fuel companies were directed to supply only 1,000 litres a day to the petrol pumps and to “reserve a separate quota for emergency vehicles, ambulances, water tankers and snow clearance machines”. Earlier, on February 7, an avalanche hit a police post near the Jawahar tunnel, killing eight policemen. Locals who rushed to the rescue could save only two personnel.

After most parts of Kashmir received heavy to moderate snowfall since Feb­ruary 6, the crisis hit air passengers too, with airlines charging Rs 20,000-25,000 for a Srinagar-Delhi flight. Passengers who had booked the ticket for February 10 found their flight cancelled by the airline, which claimed it was an “additional” flight. “They offered a refund,” said a passenger who had bought the ticket for Rs 5,000 and had to shell out Rs 20,000 the next day to the same airline for rescheduling his flight.

The police believe the road-widening is being done unscientifically by the NHAI and the HCC, without slope safety being maintained.

“For years, we have been hearing that the road from Banihal to Ramban will be imp­roved, but it has not happened,” says former CM Farooq Abdullah. “It is blocked all the time and has led to skyrocketing airfares.” Since the onset of winter, the Srinagar-Jammu highway has remained closed for over 30 days. “This is due to the mountain-cutting work being done by the National Highways Authority of India (NHAI),” says a senior police off­icer, adding that it is usually the police who are blamed for such closures as no one looks at the NHAI’s role. “Our job is to ensure smooth traffic, which can only happen if the road is not blocked due to rockslides and landslides.”

The police believe the road-widening is being done unscientifically, without mai­ntaining slope safety. Officers say exc­a­vation is being done in a way that makes the mountain’s top portion slide down. “Debris gets pushed down to the stream, doing away with the need to transport it to a disposal site and saving the agency a lot of money,” says an official.

NHAI regional officer Hem Raj says his organisation cannot be blamed for being solely responsible for the problem. “The majority of critical areas where rockslides are taking place aren’t where the NHAI has done excavation work so far,” he says, adding that the issue is being raised by state government officials with the NHAI. Conceding that the excavation was being done from below in the “cave manner”, the official insists it is now being done professionally, but adds, “The area does not allow much room for manoeuvre. The project will be completed by 2021.”

The four-laning of the Ramban-Banihal (32.10 km), and Udhampur-Ramban (40.07 km) stretches of the Srinagar-Jammu National Highway, now called NH-44, was approved in 2015 after the Cabinet Committee on Economic Affairs gave the go-ahead. The Ramban to Banihal stretch comprises two bypasses, six major and 21 minor bridges, 152 culverts, seven pedestrian and cattle underpasses, and six tunnels with a total length of 2,967.50 metres. The Hindustan Construction Company (HCC), a leading infrastructure firm, has been contracted the work on this stretch.

The police fear the road will be closed frequently in the rainy season. “HCC has hired small-time contractors with little expertise in mountain-cutting. The government will think about it only if lives are lost in a big accident,” says a police officer, adding that the HCC had done the excavation near Marog at the Ramban axis, which was hit by heavy landslides on February 11. The HCC ref­used to speak on the subject. “We are doing mountain-cutting as per specifics fixed by the NHAI and we don’t employ small-time contractors,” says an HCC off­icial who doesn’t wish to be named.

J&K’s geology and mining director Farooq Ahmad Khan admits that no geological survey has been done in the area from Ramban to Banihal. “No one refer­red it to us or to the Geological Survey of India for the survey,” he says.

Former roads and building minister and PDP leader Naeem Akhtar says the Ram­ban to Banihal stretch is the most unstable. “The more you dig it up, the more unstable it will become and remain so for the next four generations,” he says, adding he had taken up the issue with Union road transport minister Nitin Gadkari when the PDP-BJP coalition government was in office, and that Gadkari had app­roved the tunnelling of a major portion. “Then our government fell and we don’t know what the governor’s administration is doing. Every morning we wake up and hear the road is closed,” says Akhtar. “In 70 years, all natural routes like the Srinagar-Muzaffarabad road were closed, and the Srinagar-Jammu highway has become a fair-weather road and off the priority list.” Advisor to the governor, Kewal Kumar Sharma, who looks after the roads and building department, didn’t respond to calls and SMSes.