The delay in implementing the Women's Reservation Bill even after 23 years it was mooted is a clear indication that men hate to share spotlight with the fairer sex in Indian politics. Will that ever change? 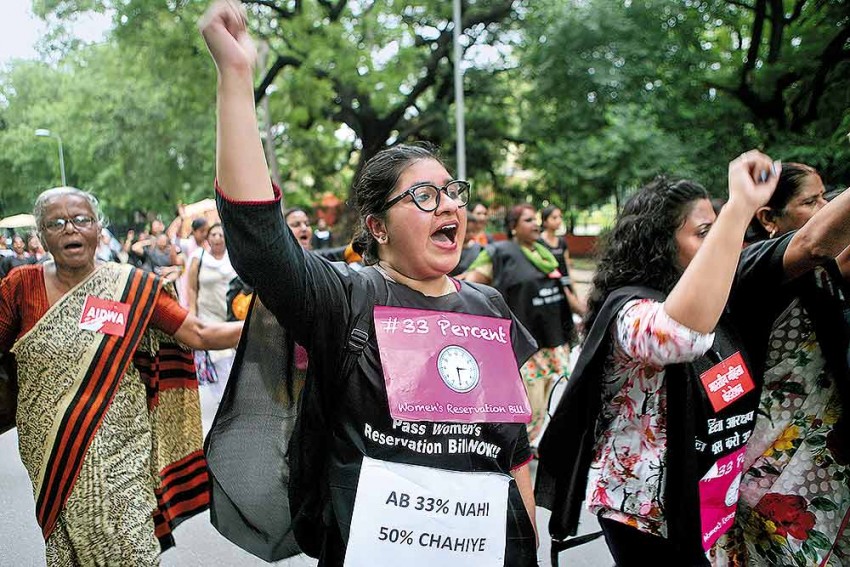 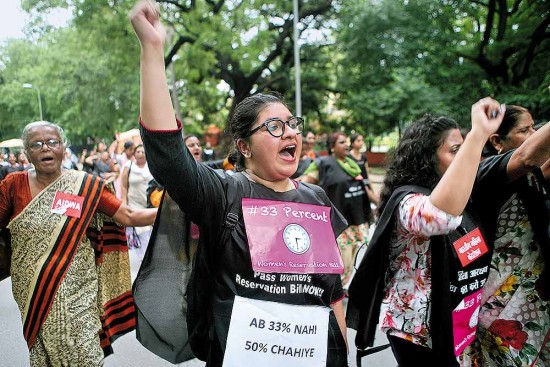 In the middle of elections last month, BJP spokesperson Shaina NC’s sudden outburst against her party cau­ght everyone by surprise. Shaina, one of the party’s most visible faces in Maharashtra, was appalled at the male chauvinistic mindset of parties that develop cold feet when it comes to sharing power with women. She said most parties lack the political will to implement the contentious Women’s Reservation Bill, which aims to ensure that women represent of one-third of the constituencies in Parliament and state assemblies. Introduced in 1996, the bill has been hanging fire ever since, with all parties blaming each other for the failure to enact it as law.

The idea was back on the agenda this election season with the ruling Trinamool Congress in Bengal and the ruling Biju Janata Dal in Odisha announcing that women comprise 41 per cent and 33 per cent, respectively, of their candidates for the Lok Sabha polls. Feminist activist and social scientist Kamla Bhasin believes the move marks a significant step towards increasing political representation of women. “I am amazed that Naveen Patnaik and Mamata Banerjee initiated such a move,” says Bhasin. “That’s just what we need now.”

The debate around the bill gathered momentum after the BJP and the Congress released their manifestos last month, reiterating their promise of one-third seats for women. Many women’s leaders call this a farce. “I don’t trust these manifestos as this is not the first time they have made this promise,” says CPI(M) politburo member Brinda Karat. “Despite the BJP’s huge majority in the Lok Sabha, it didn’t do anything. The Congress hadn’t done anything either during UPA-2. Both lack the political will.”

Bhasin says the National Alliance of Women’s Organisations came up with a ‘Womanifesto’, which was sent to all parties, with 33 per cent reservation among its main highlights. The current Lok Sabha has only 66 women MPs—11 per cent of the total seats. Last year, India was ranked 149th among 193 nations by the Inter-Parliamentary Union in terms of the percentage of women in the lower house. Worldwide, countries with more women parliamentarians also lead in ­socio-economic indices.

Pointing out that 33 per cent quota for women at the panchayat level was a significant step, feminist publisher Ritu Menon wonders what stops parties from extending it upwards.

The journey of attempts to legislate women’s reservation hasn’t been smooth. The bill was first introduced in the Lok Sabha by then PM H.D. Deve Gowda in 1996. Two years later, when the Atal Behari Vajpayee government reintroduced the bill, the Lok Sabha witnessed unruly scenes as an RJD MP tore the draft into pieces. In 2008, the Manmohan Singh government introduced it again as the Constitution (108th Amendment) Bill. The Rajya Sabha passed it in 2010. “This could happen because of pressure from the Left, which had some strength in Parliament at that time,” says Karat. In the nine years since, there has been no movement on the bill.

Congress leader Sushmita Dev says her party got the bill passed in the Rajya Sabha despite opposition from allies. “There is no party whose men want to give up seats for women. That’s why we need affirmative action,” says Dev. A glance at how parties give tickets to women illustrates this. In the 2014 general elections, there were only 668 women among the 8,251 candidates in the fray across the country, though women comprise 50 per cent of the electorate. Even the CPI(M) has only two female candidates in Kerala this time. “I am not defending this. That’s why we demand reservation,” says CPI(M) leader Subhashini Ali.

Pointing out that 33 per cent quota for women in panchayati raj institutions was a significant step, feminist publisher Ritu Menon wonders why parties are reluctant when it comes to extending it to the assemblies and Parliament. “There is a problem within the parties. That’s why they are unable to do it,” she says.

According to Bhasin, only a strong movement can push the bill forward, and reservation would be meaningful only if the situation of women improves within the parties “We don’t just need those who are biologically female in Parliament, but also ideological women—feminists who believe in democracy. I can’t respect women who spread hate,” she says.