Home  »  Magazine  »  National  » Poes Plans »  A Litany Of Woes: Why Jayalalitha's Posh Chennai Bungalow Has Turned Into A Battlefield

Jayalalitha's close friend Sasikala, now in jail, is building her political redemption around the famous Poes Garden bungalow that is now confiscated by the court 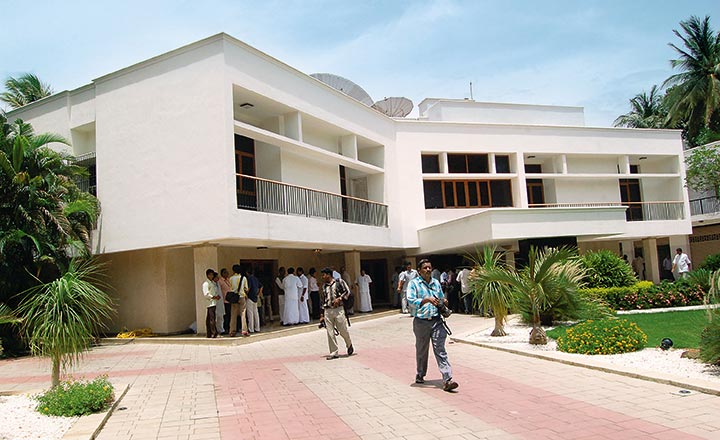 The Poes Garden bungalow
G.C. Shekhar September 11, 2019 00:00 IST A Litany Of Woes: Why Jayalalitha's Posh Chennai Bungalow Has Turned Into A Battlefield

For nearly four decades, 36 Poes Garden remained one of the most important addresses in Chennai—an unavoidable hub of political activity visited by the country’s top political leaders; a power centre from where its two women residents determined the fate of Tamil Nadu and its politics. Till fate and law intervened. One of the two protagonists—Jayalalitha—is dead while her friend Sasikala is counting her days in a Bangalore prison.

Sasikala is pinning her hopes on a premature release and is aiming to take back control of Poes Garden and other properties that the two had shared. There are only two obstacles—the trial court verdict that had confiscated most of their properties after terming them illicit. Then, there are two of Jayalalitha’s relatives. 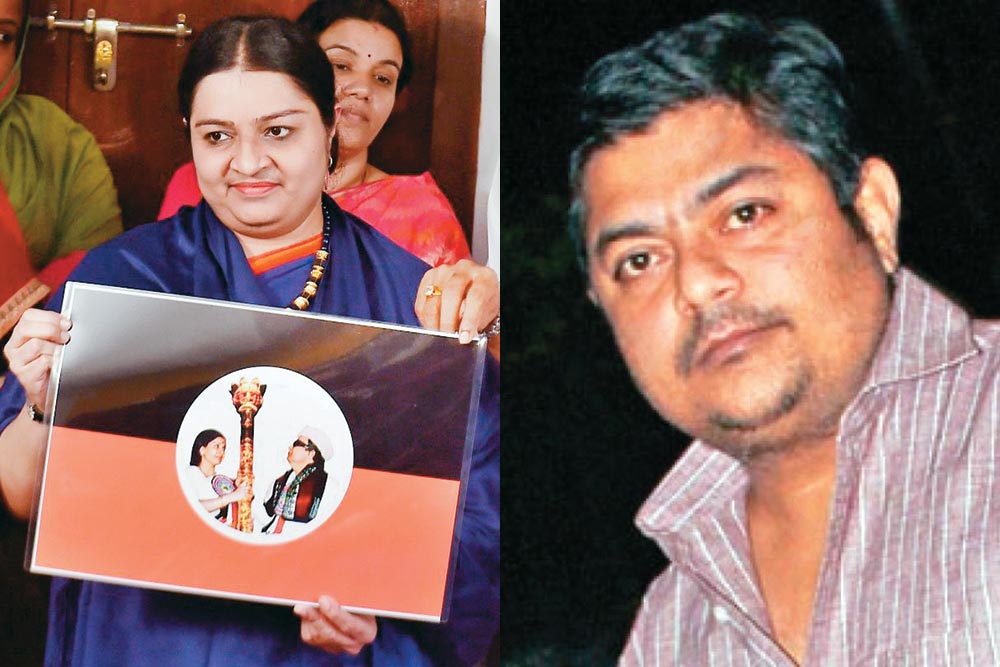 The latest challenge has come from Deepak and Deepa, the nephew and niece of Jayalalitha, claiming to be the only legal heirs of their aunt and thus entitled to inherit the palatial bungalow and other properties in her name. The two had pet­itioned the Madras High Court against the move of the Edappadi Palaniswami government to convert Poes Garden into a memorial for the dead leader and asked the bungalow be handed over to them. Of the two, Deepa, tried to exploit her resemblance to her late aunt for a brief political foray, only to realise that politics is not all about likenesses and called it quits soon.

The high court has asked why the two—children of Jayalalitha’s elder bro­ther Jayakumar—should not be decla­red as class two legal heirs so they can administer Poes Garden and other properties of Jayalalitha. The two judges even suggested that they distribute part of the wealth, which the siblings claim to be over Rs 1,000 crore, for the needy.

That is easier said than done for two reasons. Most of Jayalalitha’s properties are either confiscated or attached. “Pro­perties like the Kodananad Estate or the two farmhouses outside Chennai, acq­uired between 1991 and 1996, have been listed as ill-gotten wealth by the Bangalore trial court and confiscated. They now bel­ong to the exchequer, which means Sasikala cannot use them or even sell them, even if she has joint ownership. The same applies to Jayalalitha’s legal heirs,” pointed out Nallamma Naidu, the prosecuting officer in the wealth case against Jayalalitha and Sasikala. Strangely, the Palaniswami government has not yet notified the properties ordered to be confiscated by the trial court.

Even the Poes Garden bungalow, Veda Nilayam, that Jayalalitha and her mother Sandhya had acquired in the 1960s during her acting days, has been attached by Income Tax authorities since 2007 for non-payment of dues amounting to Rs 16.74 crore. The IT department, while responding to a PIL, told the Madras High Court that the Poes Garden residence and three other properties belonging to her were also attached. “Even if they are vested with powers to administer Poes Garden, where will Deepak and Deepa find the money to take back possession? If you add the penalty, the total amount could have crossed Rs 20 crore now,” says an auditor.

The state government had informed the HC that it would pay the IT dues from the compensation that it would pay for acqu­iring the Poes Garden house—measuring 21,000 sq ft and located on ten grounds of prime real estate—before converting it into a memorial.

The memorial idea is being opposed by local residents who apprehend that large crowds would disturb the peace and civic amenities of the upmarket residential colony that is also home to another actor-­turned-politician, Rajinikanth. Civic act­ivist Traffic Ramaswamy had said he would ensure that no government money is spent in acquiring the property of a person who faced so many corruption charges. “In fact, the state government should find how to recover many years of unpaid property tax running into lakhs standing against the bungalow,” he said. 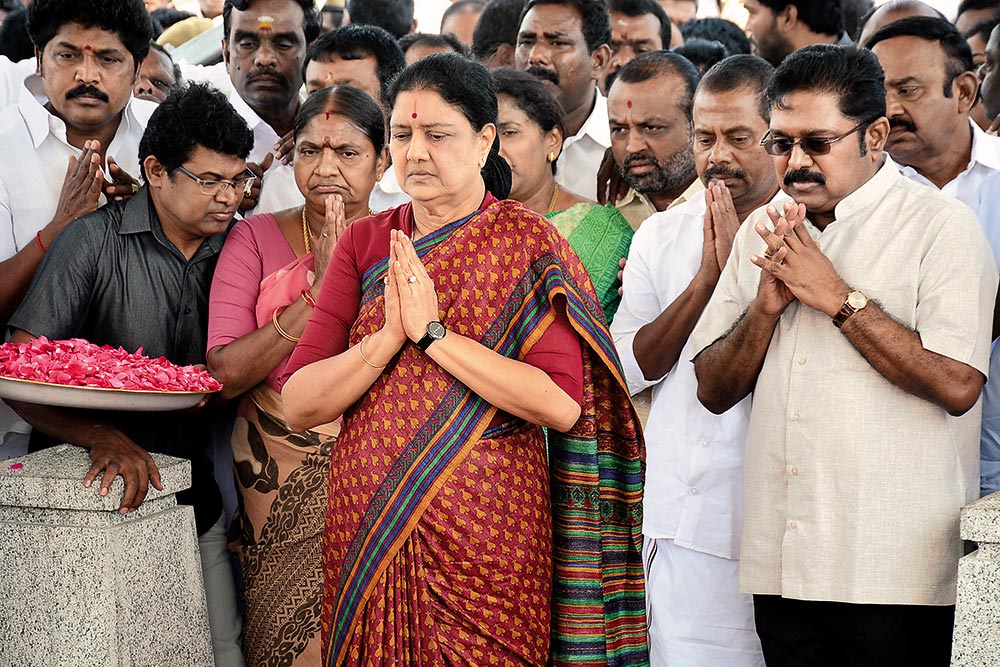 Sasikala, claimant to the house and her nephew, AMMK leader Dhinakaran at Jayalalitha’s memorial.

Photograph by Getty Images
Sasikala plans to exploit her emotional connect with Poes Garden and support from Thevars to challenge AIADMK in the 2021 assembly polls.

Even after Jayalalitha’s demise the bun­galow had briefly continued to wield an aura of power. In the absence of a will left behind by Jayalalitha, Sasikala had established virtual ownership of the bungalow, having lived there since the late 1980s as Jayalalitha’s aide, assistant and friend. After the AIADMK supremo’s death in December, 2016, she even held a daily durbar there when the party’s ministers, MLAs and minions pleaded with her to take over the party leadership. It helped that the bungalow, which used to be a power centre, was also readily available for ‘Chinnamma’ to inf­luence a leaderless AIADMK. She became the AIADMK general secretary, but her attempt to become chief minister was thwarted by the Supreme Court when it confirmed Sasikala’s conviction in the wealth case and sent her to jail.

After her departure from the political scene, Poes Garden fell into disuse till the state government took its possession as the first step towards making it a memorial. According to sources close to her, Sasikala plans to exploit her emotional connect with Poes Garden, which would add muscle to her claim as the inheritor of Jayalalitha’s political legacy. As part of the plan, a two-storey residence opposite Jayalalitha’s house is being constructed and would be ready for Chinnamma to move in once she is out of jail.

But when? That is the question. Her four-year prison sentence runs up to January 2021 and she cannot contest elections for six years from the date of her release. But the 68-year-old nevertheless hopes to make a political comeback by riding on the AMMK floated by her nephew T.T.V. Dhinakaran to challenge the ruling AIADMK in the April 2021 assembly elections. “Sasikala and her family believe that her loyalists in the AIADMK, who had benefitted from her, would rally beh­ind her once the present governm­ent’s term ends. Also, she hopes to emerge as the leader of the politically powerful The­var community, from which she hails,” says political commentator Raveendran Duraiswamy. Add to that the enormous wealth of Sasikala and her relatives—the family can pitch in for the long haul and hope to recover from the setback suffered by the AMMK under Dhinakaran’s leadership during the Lok Sabha elections.

But whether the BJP and the Modi gov­ernment would provide the leeway for them to manoeuvre in Tamil Nadu’s cho­ppy political waters needs to be seen. Having made the AIADMK and its pre­sent government an addendum, the BJP would not like one more political player to challenge its designs to expand in the state. But Chinnamma of Poes Garden, after having suffered incarceration, cannot afford to be a mute spectator and would definitely look for political redemption.

Attached by IT department over non-payment of dues amounting to Rs 16.74 crore and purchased before Jayalalitha became CM in 1991

The market value of the above are estimated to be over Rs 2,000 crore