In The Darkness, Speak Up For Light

Grimmer than the risible mytho-babble from Batra and Modi is the insidious campaign to throttle opinion. Why is everyone silent? 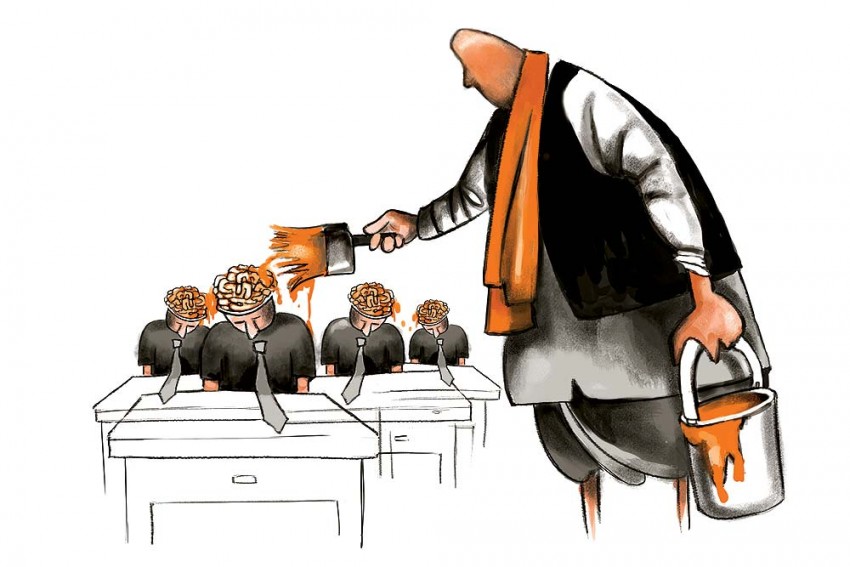 Illustration by Saahil
Kiran Nagarkar November 24, 2014 00:00 IST In The Darkness, Speak Up For Light 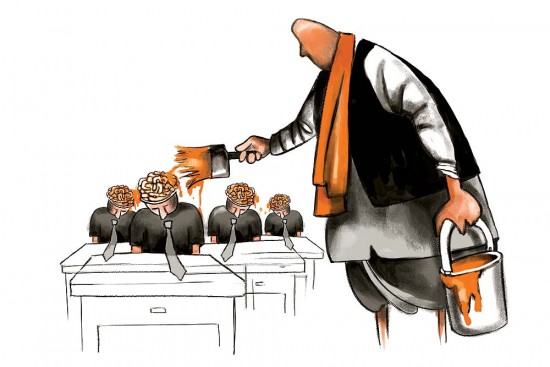 It’s unsettling, if not astounding, the speed with which new scientific discoveries, or rather ancient scientific discoveries, are coming to light. Some months ago, thanks to one Dina Nath Batra, we learnt that Rama was the first to fly in an aeroplane. And our BC (as in Before Christ) ancestors were familiar with stem cell research. But that was nothing compared to what our august prime minister revealed while inaugurating perhaps the subcontinent’s most advanced medical facility in Mumbai. Imagine, all these years, along with billions of people, I too believed that the first and last virgin birth was the monopoly of the Catholic faith. But thanks to our new intrepid Hindutva archaeologists, we now learn that Karna was the result of artificial insemination, and thus a case of a virgin birth long before the Angel whispered the Annun­cia­tion in Mary’s ear. I need hardly add that the prime minister’s teacher in this matter seems to be Batra, whose works have been made standard supplementary reading in all schools in Gujarat. It is a wonderful irony that Batra’s organisation is called Shiksha Bachao Andolan Samiti. Indeed, if this is what we mean by saving learning and education, then the country, and especially the younger generation, is in dire trouble.

I am going to move to what is seemingly an unconnected subject. Not even a week ago, the governor of Maharashtra, belonging to the ruling party, did something remarkable. He told us that applications under the Right to Information, which became legal tender after such a long and hard-fought battle in the public sphere, could be denied by any bureaucrat on the grounds that the request was frivolous. Apart from the question as to who is to decide whether a particular request is frivolous, this is the new ruling party’s strategy for combating and silencing any and every opinion that doesn’t accord with theirs. What we are really seeing is the extension and invention of new methods of censorship. When the Batra-Modi-RSS school promotes mythology as pure science, history and the new gospel, they are specifically invalidating hard-proven science and history.

Has the impact of the rise of Modi silenced the intelligentsia? Will we deny our children the light of reason?

In recent months, authors like Wendy Doniger and Megha Kumar have seen their books being taken off the shelves and pulped. The publishers fear that a legal battle will cost a lot of money and, given the outdated nature of our censorship laws, there’s a chance of the case going either way. The ideal way to combat the Hindutva brand of censorship would have been to galvanise public opinion and put pressure on Parliament to change the law. But that is out of the question now, since the BJP controls Parliament. As you must have noticed, there’s not been a peep out of even stalwarts from the BJP, like Arun Shourie or M.J. Akbar, who have at one time vociferously defended the freedom of expression and fought censorship. Let’s understand clearly, this is just the beginning. Cen­sorship will get far more draconian as time passes and the RSS philosophy gets free play. As a matter of fact, this project is already in progress. We now learn that the RSS, along with the HRD minister, is about to totally revamp the education system in line with the Hindutva agenda.

There’s something intriguing, if not bizarre, happening in our country. What terrible malaise has put our intelligentsia into a comatose state? Has the impact of the coming of Modiji and his song of development made even the most sensible people insensible to the damage being done to the fabric of our education system? Aren’t their horizons too shrinking with the mythification of science? Aren’t their children going to suffer enormously because their parents refused to stand up for their rights and for the truth?

Since I myself have suffered from both legal and extra-legal censorship with my play Bedtime Story, I have a few suggestions to make. First of all, publishers, big and small, could band together and contribute to a common fund to fight censorship cases. Secondly, all authors who believe that censorship in the service of religious bigotry is a curse should contribute a hundred or more rupees annually to the anti-censorship fund. Next, we have to get authors to visit schools, colleges and other educational institutions to talk to the students and provoke them to think about why life with extreme censorship laws is like living without light and why we have to stand together to fight for our fundamental human rights. Maybe then we can start a protest movement all over India. And of course, we must get the finest thinkers, professionals, enlightened priests and laymen to join our fight.

Whatever measures we may employ, including the ones that I have just outlined, the most important and effective one will always be public opinion. Obviously, we don’t have the millions needed to run the kind of press, radio and other media campaigns that the government swamped us with prior to the national and Maharashtra elections. But fortunately, we too have access, at least so far, to YouTube, Twitter, e-mail and every other internet media that Obama and Modiji utilise so effectively.

Let me offer a few suggestions for a campaign directed at young people headed for the US, Europe, or Australia: 1) Does your father, who is such a staunch follower of the PM, expect you to get into one of the finest universities in the world by telling your professors that we were flying planes in the 6th century BC? 2) Wow, do you really expect to get into Harvard Medical School by telling them what the PM told you—that we were performing transplants of elephant heads on human bodies before the beginning of time?

Now this one is for the parents: Obviously, you want your children to get a head start by giving them the best education. The question is, when your son is writing the crucial essay with his application to the Harvard Medical School, do you really want him to say that Gandhari, mother of the Kauravas, had an abortion and Maharishi Vyasa divided the foetus-like flesh into a hundred parts and kept them in ghee for two years, at the end of which a hundred Kauravas were born?

Come sir, your children deserve much better than that.