In The Dark Of His Troubles

The text of Rohith Vemula’s suicide note holds the key to understanding his death. It doesn’t speak like those who claim to speak for him. 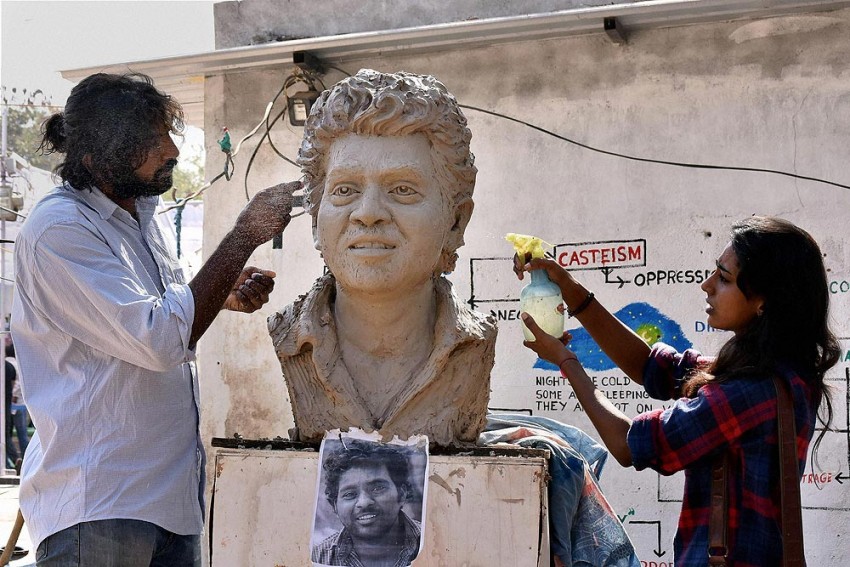 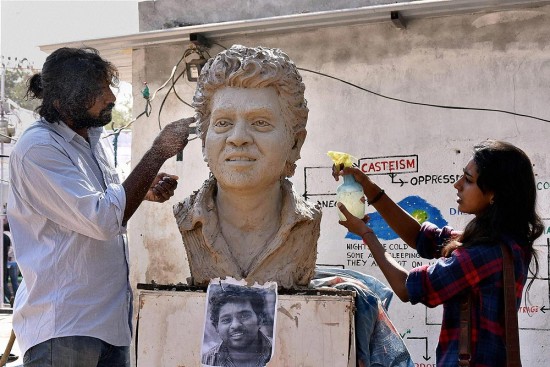 Rohith Vemula’s is a tragedy turned into farce—ironically by those very people who, after his sad demise, claim to speak for him and of his travails as a Dalit. The ‘secular’ narrative is simple, suitably twisted to fit its ideological gameplan and divorced from facts. According to them, Rohith was a Dalit fighter against oppression by the elite castes—by the evil, elite-caste dominated Sangh parivar (forget that of all parties, the BJP has the most SC/ST MPs), by the parivar that swears by the Manusmriti (how many Hindus have seen a copy of it?). The impression given is that Rohith was persecuted to the ext­ent that he was forced to take his life.

Running this insidious hate campaign, the ‘secular’ pack seems to have three objectives—pit Dalits against the rest of Hindu society, paint the Sangh parivar black, and prove that Modi’s regime is intolerant and anti-Dalit. To meet these malicious ends, they went on the warpath with some selective facts and half-truths.

Rohith was an activist of the Ambedkar Students Associa­tion (ASA), which had organised a protest at Hyderabad Central University against the hanging of 1993 Bombay blasts convict Yakub Memon. The protest was not only anti-national, it went against civil society. Memon’s life and philosophy were nowhere near that of B.R. Amb­edkar, who was Rohith’s hero, apart from being a national icon. Memon was a terrorist wedded to the destruction of civil society and the killing of innocents to meet his ghoulish agenda. Civil society, with the ABVP, was fighting the programme to oppose Memon’s hanging. Also against the hosting of beef festivals. It was incidental that Rohith and his friends were Dalits. Even if they had belonged to a different caste, say Brahmin or Rajput, the result would have been the same. It was actually a clash of mindsets, but it has been conveniently given the colour of a caste conflict.

Did the chain of events leading to the rustication of Rohith and four of his comrades alone result in his hanging himself? Was he a victim of caste oppression to such an extent he was driven to suicide? Or did he realise the futility of the ideology that motivated him to abuse Swami Vivekananda on his Facebook account, to host beef parties and actively oppose hanging of terrorists like Memon? Did he feel let down by his comrades who, he realised, had led him down the garden path and used him as a mere pawn in their game of class struggle or a  tool in their “noble task” of harvesting souls for the Lord by running down Hindu society and widening it’s fault lines?

Sure and clear answers are elusive, because the one who knew them will never come back. But an intelligent guess about what was going on in Rohith’s restless mind before he kicked the stool from under his feet can be made from his suicide note. Outlook had Rohith on its cover (Feb 1 issue) and devoted 15 pages to his tragic end and in analysing the problems of Dalits. There were articles galore—of course, with a predetermined theme. Surprisingly, the magazine did not carry the text of Rohith’s suicide note—without doubt the most important document in this glum episode. Why? Was it because his last words wouldn’t fit into the secular narrative?

Did Rohith say his birth was a “fatal accident” because he came from a broken home? He said he couldn’t recover from his “childhood loneliness”.

The note reads: “...the value of a man was reduced to his immediate identity and nearest possibility. To a vote. To a number. To a thing. Never was a man treated as a mind.” Now juxtapose this against the portion which has been struck off, where he says: “ASA, SFI, anything and everything exists for their own sake. Seldom the interest of a person and this organisation match. To get power, to become famous or to be important in between boundaries and to think we are up to changing the system. Very often we overestimate the acts and find solace in trails. Of course I must give credit to both groups for making, introducing me to wonderful literature and people.” Below these words he wrote, “I myself strike these words” and signed. But did Rohith really strike off these lines? Or was it someone else? And if so, why? But he added a postscript: “No one is responsible for my this act of killing myself. No one has instigated me, whether by their acts or by their words to this act. This is my decision and I am the only one responsible for this. Do not trouble my friends and enemies on this after I am gone.” And what are his so-called friends, the so-called secularists, doing but using the tragedy to further their agenda!

Did Rohith and his comrades host ‘beef festivals’ because they could not live without beef or was it to seek confrontation with those who hold the cow holy? It’s a settled fact that the British promoted cow slaughter, partly to meet their dietary preferences but also to enl­arge the Hindu-Muslim divide. Some denominations of church, through foreign-funded NGOs, have been using a section of Dalits to host beef parties to pit them against caste Hindus. Irre­spective of the merit of the issue, the bulk of people in this country revere the cow. The world over, the cultural ethos of the countries is respected by their systems. While dog-eating is popular in some countries, such as Korea and China, it’s a crime in some European countries.

Rohith may have been an angry young man, eager to undo the injustice done to Dalits over centuries. But a perusal of his note reveals a sensitive soul: “I have no complaints on anyone. It was always with myself I had problems. I feel a growing gap between my soul and my body. And I have become a monster.” Why was there a disconnect between his soul and body? What had he done that made him feel he’d become a “monster”? Who were the people and what was the ideology that pushed him into this vortex of hate politics in the name of social justice that eventually consumed him?

Was he having second thoughts on the ideology he had pursued and the rationale of activism he had followed?  “Maybe I was wrong, all the while, in understanding world. In understanding love, pain, life, death. There was no urg­ency. But I always was rushing. Desperate to start a life. All the while, some people, for them, life itself is curse. My birth is my fatal accident. I can never recover from my childhood loneliness. The unappreciated child from my past.”

Why did he say “my birth is my fatal accident”? Was it because of the difficult childhood he and his mother had suffered? His father, Manikumar, a Vaddera (an OBC community), had deserted his mother Radhika when Rohith was very young. And his mother, though born an SC (Mala), was brought up by Anjani Devi, an OBC. Maybe the pain of being brought up in a broken family—with mixed identities at that—made him scream that his “birth is a fatal accident”.

What was Rohith’s ambition? To be a rent-a-cause leader or someone of substance? He said, “I always wanted to be a writer. A writer of science, like Carl Sagan. At last, this is the only letter I am getting to write.” So Rohith’s role model was Carl Sagan, an American scientist, and not Mao, Karl Marx or one of the countless ideologues who twist history and spew venom against India and its timeless civilisation in the name of social justice. Rohith did not “believe in after-death stories, ghosts, or spirits. If there is anything at all I believe, I believe that I can travel to the stars. And know about the other Worlds.”

One hopes Rohith has travelled to the stars, as he had wished and got to “know about other worlds” that are hopefully better and more just.

(The writer is a former Rajya Sabha MP and former vice-president of the BJP.)

The letter Union minister Bandaru Dattatreya wrote to the HRD ministry said the Hyderabad Central University had become a “den of casteist, extremist and anti-national” activities. This was in response to the skirmish between the Ambedkar Students Association and the ABVP. Besides being not allowed to use the hostel, Rohith’s stipend had been stopped. No reason was offered for this, only that paperwork was pending.

‘They Didn’t Dare Visit The Campus’