Home  »  Magazine  »  International  » Reconstruction »  In Search Of The Iraqi Pie

In Search Of The Iraqi Pie

Business as usual. India's going all out to 'lend a hand' in rebuilding Iraq, but there's a long queue already. 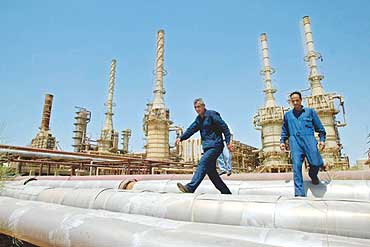 outlookindia.com
-0001-11-30T00:00:00+0553
The excitement is palpable. Indian businesses eyeing lucrative contracts in Iraq during the reconstruction phase are trying everything in the book to get a toehold. Last week, a 20-member delegation was in Kuwait. The purpose: to attend a conference organised by American engineering giant Bechtel, which has already bagged a $680-million project for capital construction in Iraq and is searching for sub-contractors. Indian managers were also vying to strike deals with Kuwaiti businessmen since they feel that Kuwait could be an ideal entry point into Iraq.

At the same time, Indian CEOs with contacts in USAID—the coordinating agency doling out Iraqi contracts—are using their clout to somehow get into Iraq. Finally, there is a clutch of exporters who enjoyed cordial relations with the former Saddam Hussein regime and think that they can win a few deals due to proximity with Iraqi and UN decision-makers. However, right now, there's no clear idea how the reconstruction story is going to pan out. "No one can confidently say how these sub-contracts will be awarded," says A.C. Patankar, advisor, CII, which is helping Indian firms.

Still, there's a growing feeling that India could grab a sizeable chunk of the reconstruction pie which is expected to be at least $100 billion over the next decade or so. (Experts contend that just repairing and maintaining the neglected Iraqi oil infrastructure will cost $7.5 billion in the next 18 months.) Sunil More, secretary general, Indian Electrical and Electronics Manufacturing Association, is confident that orders for electrical equipment could rise 3-4 times in the post-war period, compared to sales under the former UN Oil-for-Food programme. "We are hoping for the best," More says.

Others like Larsen & Toubro, the Kirloskar group, ongc and Oil India feel they will get a few projects. Both diplomatic and economic factors could work in India's favour. Diplomatically, India's proximity to the US has grown. And if New Delhi decides to send its troops to Iraq, it may end up pleasing Washington more. At an economic level, the US-based prime contractors may not want to send their people to the still-insecure Iraq. Hence, they may give labour-intensive sub-contracts to India and other nations with cheap labour force. In fact, Indian manpower agencies are already gearing to send thousands of workers to Iraq.

On the flip side, there's tough competition from several countries. In Kuwait, policy makers are still peeved with the manner in which I.K. Gujral, the then foreign minister, made a detour to Iraq in 1991 during Gulf War I, which was interpreted as a sign of solidarity with Saddam against Kuwait. So they may cajole local businessmen not to join hands with Indian firms. One must also not forget that the US' coalition partners, like the UK, Poland and Australia, are insisting that their firms get the sub-contracts. Finally, the Arab League is trying hard to lay its hands on Iraqi projects.

As soon as the current reconstruction programme was announced, the US-based representatives of Arab countries demanded that it would be appropriate for the US to award contracts to Islamic countries for a number of reasons. These included political proximity to Iraq, cultural sympathy with its people and familiarity with Iraqi local conditions.

While some Indian firms are waiting expectantly for things to happen, there are others who know they will turn out to be losers, whichever way events move in the next few months. These are exporters-middlemen who, either knowingly or otherwise, were participating in the informal, rather illegal, trade with Iraq in the pre-war era.

During that period, the UN had imposed trade sanctions on Iraq and foreign (non-Iraqi) companies could only sell goods under the Oil-for-Food programme.But many South Asian, East European and West Asian firms had devised ways to circumvent it.

A few Indian firms have even been accused of selling dual technology and other products like refrigerant gases and compressors. According to a 2002 report of the US General Accounting Office, Iraq earned "$6.6 billion in illicit revenues from oil smuggling and surcharges during 1997-2001".

Even those who were doing legitimate business with Iraq are uncertain about their future. At one level, with the UN sanctions gone, Indian traders can increase their business since they know buyers in the country. For instance, Indian tea exporters, who were selling over 40 million kg to Iraq are not bound by the UN quotas any more. However, they will face competition from producers in Sri Lanka. "We think it's now up to us to put up a presence in Iraq and start making initial efforts," says Monojit Dasgupta, spokesperson, Indian Tea Association.

Other exporters like PCP International, which became a conduit for a number of Indian products sold in Iraq since it was appointed as the official trading agency by the previous Iraqi regime, may also find it difficult to retain its position. But H.S. Mejie, PCP chairman, is confident. "We will still do well since there'll be a huge requirement for contracts over the next 15 years in sectors like housing, fertilisers and industrial projects," he says.

The fate of Indian companies that inked deals directly with the Saddam regime is also unknown. For example, ONGC Videsh had decided to invest $200 million in Tuba oilfield in southern Iraq. It was a part of the $500-600 million joint venture with other partners including Reliance Petroleum and Sonatrach of Algeria. Similarly, BHEL had a Rs 500-crore agreement to supply gas turbines to Iraq. Now, these projects will need to get a fresh okay from the UN and, possibly, the US. In the oil sector, since the US oil majors were blocked out of such deals due to their country's sanctions against Iraq, a lot of churn is expected.

Clearly, New Delhi will need to take a number of diplomatic initiatives if it has to ensure that Indian firms grab a few deals in Iraq. At the same time, Indian CEOs will need to be on their toes because key decisions relating to Iraqi contracts will be taken without making too much song and dance about them. Says CII's Patankar: "I don't think the American companies will tom-tom on whom they confer the sub-contracts. So, if Indian companies want a share of the reconstruction business, they will have to be around and alert and push for the contracts." The Iraqi pot of gold is not up for grabs as such, but some gold coins could definitely come India's way.