In Search Of A Slogan

Its newest USP: the party of the have-nots. But it can't alienate the middle class too. A riddle for copywriters. Updates 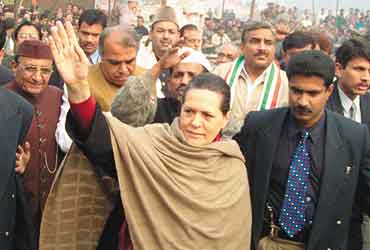 Gujarat. Guzari nahin yeh raat. (Gujarat, the nightmare is not over.)
—Congress slogan for Lok Sabha 2004

In its pitch to the AICC for the Congress account, an advertising agency suggested the Congress look for brand ambassadors like Shahrukh Khan. The agency failed to bag the account, but it left some members of the screening committee in introspective mode, wondering just what the Congress had come to. "When you think your brand has no intrinsic value, you get celebrities to endorse it," quipped a party strategist.

So, even as India Shining becomes part of the popular vocabulary and brand Atal goes global, the Congress is still groping for an emotive slogan. Feelgood seems to have passed the Congress by, with its most wanted alliance partner, the bsp, playing coy and the BJP’s media blitzkrieg swamping the public. "In the Congress, it’s every man for himself, with most people just concentrating on winning their own seats. We’re being reactive, not proactive," admits an MP.

Just what is its USP and what exactly does it stand for? The answer: it is the party of the have-nots. At the same time, it is wary of alienating the middle class. Says spokesman Aswini Kumar: "We’re happy for those for whom India shines, but our concern is the huge majority of people living on the fringes."

Sample some catchlines aimed at them. "Bhrashtachaar aur atyachaar, hai NDA sarkar ka aadhaar (corruption and injustice are the hallmarks of the NDA) is one of our slogans," says party spokesperson Abhishek Singhvi. A complementary slogan, India Cheated, has been coined by Rajya Sabha MP Kapil Sibal. Singhvi says the Congress counter-offensive will bring out all the scams during the NDA tenure. Starvation deaths in a time of food surplus, farmer suicides and growing unemployment, declining capital expenditure, flip-flop on foreign...