In Kusht Basti, an economics grad becomes the Second Coming 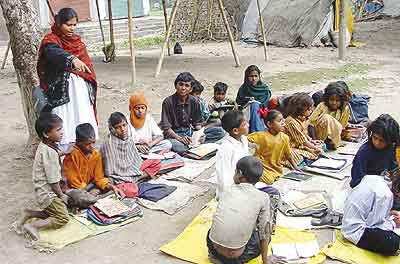 outlookindia.com
-0001-11-30T00:00:00+0553
The child lepers of Kusht Basti in Chapra district of Bihar may not have a Mother Teresa caring for them, but they have someone who comes very close to the Saint of the Gutters. And she goes by the name of Raushan didi. In the last three years, Raushan Ara has become the person the lepers of Kusht Basti worship as their Mother. For them, Raushan is doing what neither the government nor, for that matter, any ngo has done in the last forty years since they settled here—giving their children a future.

An economics graduate and in her late twenties, Raushan is a living example of grit, dedication and determination. Her dream, for now, is to make every child in Chapra district literate and disease-free. "I chose to work for them because child lepers are the most unfortunate, uncared-for lot in our society, deprived of everything for no fault of their own. Born of infected parents, they lose what little they have right in the beginning—from education to entertainment," says Raushan with mother-like concern. Despite her own shaky financial status, Raushan has been regularly coming to the basti, helping the children in their education, medication and becoming a part of their lives. "Raushan didi hasn’t failed to visit our basti for a single day in the last three years," says Rahmad Soi, whose nine-year-old daughter has not only been cured of leprosy but has now learnt to read and write too.

It all started in the second half of 1999. On September 8, with the help of an unregistered ngo called Saran Rights Collective, she opened a school named ‘Naya Vihan’ in the locality. Here, under a makeshift thatched roof construction, classes were started for four hours in the morning. Initially, the response was negligible but in a few days the number of students had gone up to 40-45. Today 14-year-old Mohammed Naushad and 11-year-old Pankaj can read and write, and that too both in English and Hindi. Naya Vihan is still a one-teacher school, where the teacher comes even on Sunday and there are no holidays. Raushan does it deliberately so that a "sense of belonging" develops among them and they don’t get distracted from the daily routine. "Once they get disoriented, all efforts could prove futile," she says. In the last three years, altogether nine infected children have also been completely cured of leprosy through Raushan’s sustained efforts and proper care. She claims that soon most of the children will be cured and then, hopefully, they shouldn’t have any difficulty getting admission to a government or private school.

Raushan has also started organising other activities in the basti, in a bid to bring its residents back into the mainstream. Recently, again with the help of the Saran Rights Collective, she was able to arrange pensions for some of the leprosy-infected old-timers, under the government’s old-age pension scheme. Harendra Singh, the organisation’s secretary, says it’s only because of Raushan’s relentless efforts that land has now been alloted to build houses for these people under the various government schemes for leprosy-infected people. "The government has allotted land in Sujan Chapra and once they settle there permanently, things should become easier for me in my work with them," Raushan hopes.

For Raushan, managing all this is a big task but she is thankful to some of the prominent businessmen as well as other kind-hearted people of the district for their support. As far as funds are concerned, it’s mostly raised from charity and donations, she says. Also, government doctors come and provide consultations and medicine. "I manage to get most things done just with requests," says Raushan with gleaming eyes and an innocent smile. So funds are not a problem? "No, funds are important but one can serve society even without funds...and do wonders at that. That’s really what matters," she says. If you would like to share in Raushan’s dreams and hopes, contact her at: Raushan Ara, Indian Institute of Commerce, Daldali Bazar, Chapra district, Bihar. Ph: 06152-26266.