In Indore, a desecrated church is rebuilt by the real bhakts 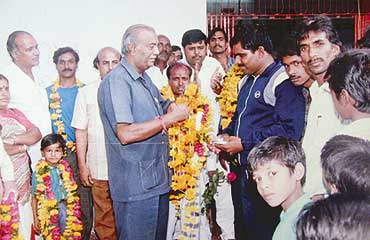 outlookindia.com
-0001-11-30T00:00:00+05:53
After the Babri masjid was razed to the ground by the ‘Jai Shri Ram brigade’, then prime minister P.V. Narasimha Rao had promised that the mosque would be rebuilt. But till date, it remains just that: a promise.

The storyline’s been a lot different at Indore in Madhya Pradesh. What an all-powerful prime minister of India could not accomplish has been done by the trustees of a Bajrangbali temple here. They have rebuilt a church wrecked by fanatics. "They only call themselves Bajrangis, but we are the real bhakts of Bajrang Bali," says Onkarlal Lakhiwal, president of the Nandanagar Hanuman temple trust, which undertook the rebuilding work. On the other side, Father L. Meena, Bishop of the Bhopal Diocese, says, "We are extremely happy. Such initiatives send a strong and positive message to the people".

On May 11 last year, on the eve of Congress president Sonia Gandhi’s visit to Indore, around 15 motorcycle-borne miscreants attacked three churches in different parts of Indore. One of them was the St Paul’s Church. The church, located in Bajrangnagar—a lower middle-class locality—was built nine years ago. The goons first tried to set the church on fire. When this failed, they broke in and ransacked the place. "The entire place was in a shambles," says Sushil Jacob, in charge of the church. The police and the administration were informed but the culprits are still to be booked.

This was when the trustees of the Hanuman temple at Nandanagar, about 2 km from the church, stepped in. "Bajrang Dal wale Hanumanji ke naam ko badnam kar rahe thhe. Bajrangbali ke hum sacche bhakton ko yeh manzoor nahi tha (the Bajrang Dal was maligning the name of Hanumanji. This was unacceptable to us, the real devotees of Bajrangbali)," says Mukesh Shah, an advocate and also secretary of the temple trust.

The huge temple, spread over 15,000 feet, was built in 1955. And for the last 20 years, it has been involved in social work in the area. "We have not limited ourselves to just organising kirtans, bhajans and other religious activities. A minimum of the trust funds is spent on religious performances. The rest is utilised for social work like holding health camps, sports meets and funding the education of the poor children of the area," says Lakhiwal. Incidentally, one of the 15 members of the trust is a Christian. "The trust membership is not restricted to only Hindus. Anyone with a noble heart is welcome," says Shah.

The trust approached the authorities with a proposal to rebuild the damaged church. "We readily accepted the offer because it demonstrated that, notwithstanding what the purveyors of hatred say or do, the ordinary Hindus and the ordinary Christians come to each other’s aid in times of distress," says Father Benjamin. He says that the proposal did face some opposition from the "conservative elements" within his community. "When we ourselves are capable of handling the job, why involve outsiders," they asked. "But we overcame this by explaining the symbolic importance of the initiative," he says.

Work began within a fortnight using the contribution from the temple trustees and was completed in a few months. Some of the trustees volunteered their labour also. "This is the first time that such an incident (attack on a place of worship) has taken place in our city. And we hope it’s also the last. But if any such thing happens in the future, our response is going to be the same," asserts Bandu Kurwale, a businessman associated with the rebuilding effort. "The effort shows clearly that a handful of fanatics cannot and will not be allowed to tear apart the social fabric of the city," says Sanjeev Kapoor, a B.Com student.

On July 23, the temple’s trustees were felicitated at a public function in Indore by the state-level national integration committee, headed by Chief Minister Digvijay Singh. The Shahar Qazi of Indore and former MP Homi Daji were among those present.