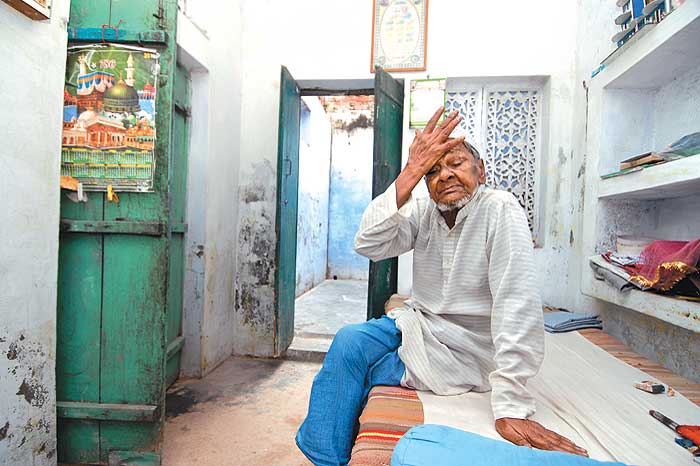 These days, the lanes and bylanes of this holy town are  teeming with murmurs. ‘Schools will remain shut for a fortnight from September 17.’ ‘Central troops will arrive in huge numbers by afternoon.’ ‘Curfew will be imposed four days ahead of the verdict on the Babri Masjid-Ram Mandir title suit.’ ‘The town will remain quiet, but nothing can be said for sure.’ Idle rumour-mongering, some might call it. But this is Ayodhya, where frenzied mobs, egged on by BJP and Sangh parivar leaders, brought down the centuries-old Babri mosque in 1992 and violently heightened the edginess to Hindu-Muslim relations in the country. So the disquiet and the tension seem all the more burdensome, everywhere—at roadside tea-stalls and dhabas, at the ghats on the Sarayu, at the town’s only college and its government schools, some of which are indeed lodging the PAC and CRPF platoons sent for bandobast in anticipation of the verdict, set for September 24.

“Jab tak aman hai, tab tak hai. Aagey dekhiye (Till such time as there’s peace, it’s good. Let’s see what happens),” says Maulana Jalal Ashraf, the imam at the Aara Machina Masjid. He’s a post-demolition Muslim in Ayodhya, spared the trauma of being there on December 6, 1992, when the Babri Masjid was razed. “Muslims who were here that day fear for their lives. They are really scared and don’t want any trouble,” he says. “They were assured of safety then, but that was an empty promise. Let’s see what happens on September 24; we will react accordingly. The mosque will remain there till doomsday.” 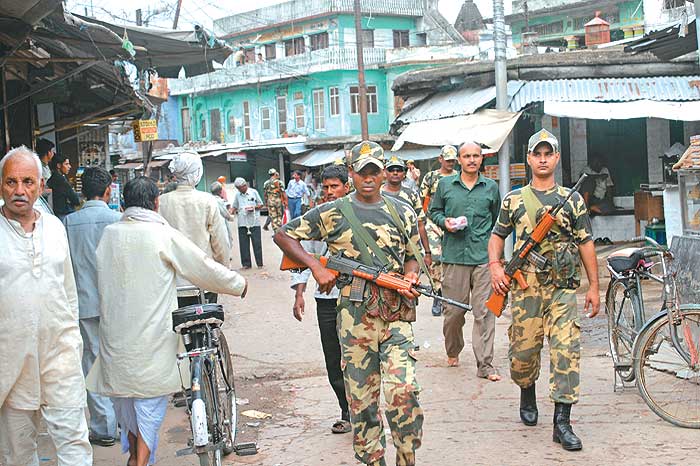 About a 20-minute walk through the lanes from the imam’s mosque, at an ashram in Hanumangarhi, Ram Vilas Vedanti of the Ram Janmabhoomi Nyas speaks in language far sharper. “You think Hindus will just keep quiet?” he asks. “An agitated Hindu can do anything. He’s not under our control. We will not ask Hindus to be restrained.” Not for him and other ardent dreamers of a temple at the disputed site the restraint now being urged by L.K. Advani, the BJP’s face of the Ayodhya movement, who had watched as the mobs brought down the mosque. Nor are they taking seriously RSS chief Mohan Bhagwat’s promise of “a temple in Ayodhya” to redeem Hindu pride. “Rhetoric can be left to the political parties,” says Vedanti. “Advani’s call for restraint may stem from some serious reasons. Such compulsions do not apply to me.”

The bluster from Vedanti and his ilk, however, is in stark contrast with the tired, and even blase, mood of VHP-Sangh parivar workers in town. “It’s best to say we’ll exercise restraint,” says one. “What will we do? We can’t just pick up bricks and stones and start building a temple at the site. Nothing has been done in over a decade—this has gone on for too long. We are just waiting.” Waiting for the opulent temple the BJP promised from before 1992.

Leaders like Advani even stand to face the charge of betrayal in Ayodhya. “How many times can they milk the same emotion?” asks Gayatri Devi, 65, who sells tourist guidebooks. As if to set things in balance, Mohammed Yaqoob, a shopkeeper, says, “No neta, no party will do anything. The Congress is an equal villain. All crucial decisions were taken when it was in power.” Yaqoob is bound by pathos to the disputed site: his grandfather, Maulana Abdul Gaffar, had, as imam, led the last namaz held at Babri Masjid in 1949.

For a town of 1.5 lakh, Ayodhya has one government hospital, with just one physician.

Political leaders no longer hold even an iota of appeal in Ayodhya. Forget the mandir-masjid promises, which remain ambiguous as ever, small-town India’s new clamour for basic needs, development, education goes ignored in Ayodhya, as in many other places. Uttar Pradesh chief minister Mayawati’s ‘Ayodhya package’ of Rs 235 crore, released in 2008, has helped with some improvement in the roads. “But there’s no drinking water,” says Gopal Sharan, a CD vendor. “And load-shedding can extend up to 14 hours.” The town of 1.5 lakh people has one government hospital, with one physician. Patients have to go to the twin city of Faizabad if they need a gynaecologist. A decade in the headlines—perhaps because it has been over a highly emotive rather than practical issue—has not got Ayodhya a second degree college. “Let’s stop this mandir-masjid now,” says Jitendra Kumar, a mechanic. “The world has gone ahead. We are still stuck.”

But religion inspires a steadfastness that won’t let many give up. Hashim Ansari, 90, the petitioner in the title suit, attended the last namaz held at the Babri Masjid, across the road from his house. Now four barricades separate him and the mosque. Not for him an out-of-court settlement. “If the matter had to be sorted out by mutual discussion, we’d have done it long ago,” he says. “Let the courts decide.” But there are those—on both sides of the divide—who may be less accepting of court decisions on matters of faith and react with violence.

So as verdict day approaches, the administration has arranged for tight security. Over the last fortnight, confidence-building meetings of Hindus and Muslims are being held in Ayodhya and neighbouring villages. There is even talk (though no official communication yet) that entry into Ayodhya would be monitored September 20 onward: outsiders will be turned away. Jawans of the CRPF, Uttar Pradesh police and PAC have been deployed in large numbers to minimise any possibility of a flare-up.

The faithful, on both sides, have begun prayers for a verdict in their favour. “All Muslims must pray for the verdict,” says Ansari. The Sangh parivar, meanwhile, is evoking the ultimate Rambhakt. In some 10 lakh temples across the country, the devout are keeping up the chanting of  Hanuman chalisa.

By Prarthna Gahilote and Sharat Pradhan in Ayodhya