It's where petitioners queue up, and die if they can't meet her 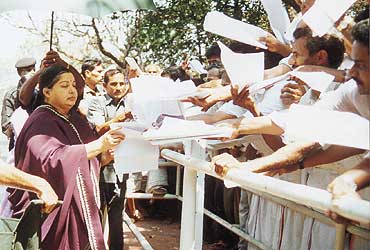 outlookindia.com
-0001-11-30T00:00:00+0553
In one year, Fort St George, the seat of the Tamil Nadu government, has turned into a temple. Here the "presiding deity of Tamil Nadu", as Puratchi Thalaivi J. Jayalalitha was famously referred to by stand-in CM O. Panneerselvam, gives darshan to the janata. Every day thousands from all over the state queue up to hand over 'petitions' to Amma during her midday durbar, officially termed an "interface with the public". They come with prayers on their lips, hope in their hearts, and of late a bottle of cheap poison in their pockets. They sometimes wait for days, some swooning, a few breaking the barricades and dashing towards the CM's convoy, and those really desperate trying to kill themselves. Since March, there have been eight suicide attempts—some successful—on the secretariat premises.

Between May 14, 2001, and April 1, 2002, the CM's special cell has received some 5,46,000 petitions, of which 86 per cent have been claimed to be "disposed of". For those who personally hand over petitions, there is a lucky dip after some 3,000 petitions are collected, and two or three cases are looked into "personally" by Amma. Others go to the special cell headed by special officer Beela Rajesh.

It's Amma herself who encourages the belief that petitions handed over directly will be attended upon immediately. This accounts for the frenzy outside the CMO. An old woman breaks into a delirious smile at the sight of Amma in a green sari under a green umbrella. The petitions are plucked from the devotees' hands and dropped into green bags marked 'Chief Minister's Special Cell'. Repeated telecast of such durbars on Jaya TV delude more people into seeking instant justice. But even the odd petitioner who draws Jayalalitha's personal attention might not have reason to be happy.

Like 19-year-old Usha Nandhini of Pennadam village, Cuddalore district, who had been jilted by her lover Jayaraj. Hearing of Usha's petition, Jayaraj's parents got him married to a girl of their choice on April 25 and registered the marriage at the Cuddalore sub-registrar's office the next day.

Usha's case came to Jayalalitha's attention only after this marriage. But hell-bent on helping the damsel in distress, she ordered the Cuddalore SP, Davidson Devasirvatham, to "do the needful". When a police team descended on the newly-married Jayaraj's house, his father showed them the wedding photos and the marriage registration certificate. But Amma's order was an order.

And so the policemen forced Jayaraj away to the Kaleeswarar temple in Pennadam and made him tie the mangalsutra on Usha on May 8. Thus was a state-sponsored bigamy effected unwittingly. Jayaraj has gone back to living with his "first wife", and Usha continues to be in distress. "But Usha's grievance has been addressed," Davidson tells Outlook. "She wanted a father for her child which she has now."

A day after the marriage, Amma mentioned how she had saved Usha in the assembly. She also lashed out at bureaucrats: "They're lackadaisical. And, like a ringmaster in the circus, I'm trying to whiplash them into action." Usha's 'marriage' was the result of one such whiplash.

Meanwhile, suicide attempts at the secretariat continue. The latest was on May 20 when 35-year-old Anthonyammal, of Suthamalli, Tirunelveli, consumed poison, disappointed over not being able to submit a petition. Jayalalitha was campaigning for the May 31 by-elections and couldn't hold a durbar that day. Another headline-grabbing suicide was committed by 45-year-old Velu and wife Nalani from Coimbatore, who consumed a bottle of poisonous dye following their failure to hand over a petition to the CM.

After their deaths, Amma awarded a solatium of Rs 1 lakh and a job for the couple's daughter Uma, and said: "Despite being the most endangered and threatened leader in public life in the entire India, I have made it a habit to meet the people and listen to their grievances." The suicides do not seem to bother her. They're but a hazard of a CM's interface with the janata.

Masters Of The Game