Former CJI, and chairman of the NHRC at the critical time when the Gujarat riots took place, on Nanavati Commission and more 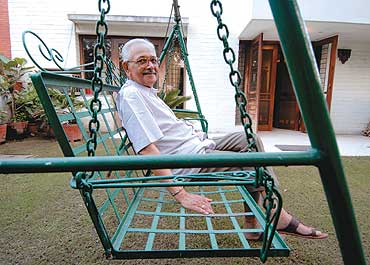 outlookindia.com
-0001-11-30T00:00:00+0553
J.S. Verma, former chief justice of India, is considered both an excellent legal mind and a man of great integrity in an age when standards of judicial probity have fallen so sharply. He has been part of several significant judgements of the Supreme Court, besides having been chairman of the National Human Rights Commission at the critical time when the Gujarat riots took place. He spoke to Saba Naqvi. Excerpts:

Judges seem to be complicit in trying matters through commissions of inquiry or being used for political purposes?

Well, I am upset at the inordinate delay in commissions of inquiry. The Liberhans Commission has been at it, examining the Babri Masjid demolition, for 16 years. Even the Nanavati Commission that is in the news now has taken six-and-a-half years to come up with its findings. I don't want to say anything about it giving a clean chit to the Narendra Modi government. But I want to say something about the claim made by the commission that the Gujarat government complied with all the requests made by the NHRC of which I was then the chairman. Justice Nanavati has absolved the Gujarat government of failure to implement the recommendations of the NHRC. That is against public records. Please see my letter of January 3, 2003, to the prime minister, within a fortnight of when I demitted office. In the letter, I expressed my deep anguish that a lot remained to be done to give justice to the victims of Gujarat which required reparation and also identifying perpetrators and punishing them. This letter is part of the annexure of the 2002-03 annual report of the NHRC. That is why I was taken about when I heard that Justice Nanavati has given a clean chit to the Modi government. I am not commenting on the first part of the findings of the Nanavati report. But I do have a response on what the report says about the NHRC in para 229 on page 175.

Read the inspection report I wrote after the riots which has been attached to the May 31, 2002, order of NHRC. That's not all. You are hearing of Article 355 now. But at that time, I told the Centre, why don't you use Article 355 on the Gujarat government. I was told 'We are examining it' and nothing was done. That is why I am shocked that Justice Nanavati should say the Gujarat government and its officers all cooperated with the NHRC.

Is there a certain ambiguity or political pressure when matters linked to Hindutva issues or communal riots come up before commissions and the judiciary?

Well, all I can say is something like what Justice Liberhans has done makes me very upset. If in 16 years you can't find out, then it is not worth you finding out. And what is there to find out? We heard the Ayodhya matter and gave the judgement on October 24, 1994. What new thing is he looking for? The problem is no one's interested. If someone is exonerated, it can be made use of. The conclusion now would be of interest only to interested parties. The people and public are not bothered. What you should find out is why every government keeps extending the term of this commission.

What about corruption in the judiciary? How do you think you can handle the problem?

Of late, there is a felt need because so many cases are coming up. There is a great need for a separate law that will apply to high court and Supreme Court judges. Corruption is seeping into judiciary at all levels. When I was chief justice, I wrote to the then PM for taking action against a high court judge after holding an inquiry. But nothing happened. The executive did nothing. The situation has not changed. An effective mechanism needs to be in place that will examine allegations based on strong prima facie evidence. I wrote a letter to the present PM in 2005 mentioning the need for judicial accountability. I am given the impression that the move for enacting a law for that purpose has been set in motion. But it has yet to take shape.

There are so many scandals now involving the judiciary. Is this the worst period in our judicial history?

There appears to be strong evidence that supports the allegations against judges.

What is your view about relatives and children of judges operating in the same court?

Just because a judge has children, they cannot be stopped from joining the profession. But it should be in a manner that does not create the impression of children taking advantage. There is a lot of talk everywhere about this and I can't say that all the talk is baseless. There must be no linkage of any kind between family members operating in same courts. Most allegations may not be true. But even if one is true, it does distress me.

How does the media go about investigating the judiciary without getting hauled up?

You now have the amendment in the Contempt of Courts Act which provides truth as a justification. If you are certain of your facts, then certainly exposing corruption, particularly in high places, is in public interest. If you are referring to the matter relating to former CJI Y.K. Sabharwal, then the high court judgement is pending in appeal in the Supreme Court and the apex court has stayed it. Personally, I have always felt that an allegation must be examined. Exposing corruption anywhere is in public interest. Exposing it at the higher levels is in maximum public interest.

Even if it involves a former CJI?

Why not? I think all the more reason. People know the allegations. If the allegations are true, why should a person be immune to prosecution just because he occupies a high office? The higher you are, the higher should be the yardstick by which you should be judged and the higher the ethics. Otherwise, what justification do we have for passing orders and castigating others if we don't ourselves follow any ethics and principles?

What have you to say about the post-retirement careers judges work out for themselves?

I am against what many judges do but I am told I am the odd man out. Since judges are not allowed to practise law in the courts they once served, what is the difference if they give an opinion in a legal matter where it is identified and produced as that judge's opinion. If the prime minister or someone in high office seeks an opinion or arbitration in a matter of public interest, it is okay for a former CJI to give an opinion without any financial renumeration. Millions are being earned after retirement by persons in my category. I don't like to take names but with a few exceptions I am the odd man out. Because of this trend, there is a perception that judges get too friendly with lawyers who they think will give them work after retirement. I don't believe the judges get compromised by these lawyers but in the case of the judiciary, justice should not only be done, it must be seen to be done. Only a few years back, I came to know that some persons heading commissions of inquiry are drawing salaries of a Supreme Court judge are also doing arbitration for money. How can they do this? A former chief justice who was then in office confirmed this fact. There are individuals heading more than one commission who are making money through other means.