"I'm Always Attracted By The Ridiculous In People" 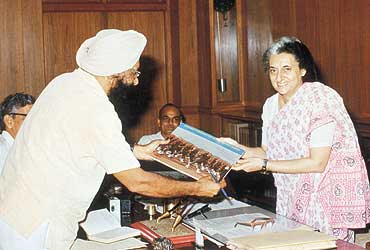 outlookindia.com
-0001-11-30T00:00:00+0553
At 87, Khushwant Singh's vision may be failing him a bit but not his eye for detail, nor his penchant for pricking people's vanity, both of which the incorrigible iconoclast uses to devastating effect in his memoir: Truth, Love and a Little Malice. An interview with Sheela Reddy.

How difficult is it to write a candid memoir in India as you have done?
Once you decide to tell the truth as it is known to you, it's not much of a problem. I haven't made excuses for myself, but even that wasn't very difficult because I never had a great opinion of myself. The only problem was the writing—my life has not been particularly interesting but I had to make it interesting for the reader. But that art of making writing interesting is something I've been trying to do over many years.

But isn't it difficult to be candid when your writing includes the high and mighty?
I've already paid the penalty for that—I had to wait six years to bring out this book. But I like to take up cudgels against people in power who misuse power. It's not much fun writing against people who can't hit back.

Did your experience with the courts teach you caution?
Not much. I was angry with the judgement, being sermonised about what a "learned person with wide experience" like me should write about—that I should "inspire the younger generation", the judgement said, which I thought was ludicrous.

Why do you portray our leaders with feet of clay?
All people have feet of clay. Some rise to eminence because of being politicians but they remain human beings with human frailties. Nehru, for example, became a demi-god. But he was vain, arrogant, ill-tempered and a great flirt. It wasn't just Lady Mountbatten, although that got played up because she was a celebrity in her own right. There were others—Padmaja Naidu, Shraddha Mata and innumerable other flirtations that are now coming out in his letters. He retained his demi-god image because of his stature as a politician and statesman but that doesn't mean he didn't have his share of human frailties. The same with Krishna Menon. He too had innumerable affairs and there is nothing wrong with that except the image he tried to project of a brahmachari. That was nonsense. Also Radhakrishnan, orating and sermonising with others. But when it came to himself it was different. Indira Gandhi was vindictive and petty in her personal dealings but nonetheless a great leader.

Do we hero worship our leaders more than others?
We are all looking for icons, a God-like figure to hero worship. Even me. Gandhi is the one icon I can't bear to tear down. Why else do I close my eyes to his foibles and refuse to accept what he confessed about himself? I haven't quite got over why a man like him should try out the experiments he did, like sleeping naked with young girls. He still remains an icon for me and I want to see him as a perfect human being although he was nothing of the sort. The way he treated his sons, for example, and the fact that he could sometimes be quite vain and unforgiving.

Are we Indians more hypocritical than other people?
I'm quite certain we are. I've never known another people to lie as much as we do. Especially people in power. In their desire to hang on to power, they can sacrifice principles, friends.

In the case of interesting writing, does the truth sometimes get a little twisted?
I was not conscious of twisting the truth but I did take a conscious decision to bare myself. In the process you hurt some people inevitably. That's a risk I took: losing the few friends I have. I don't have many friends anyway, just people I've been associated with. One of them, Iqbal Singh, wrote me an angry letter when he saw what I'd written about him. "I didn't know you had so much venom in you," he wrote. Neither did I: I thought what I wrote about him was quite amusing and not vindictive. It's like calling a friend a twerp; you expect him to understand because it is said with affection.

Why aren't there more frank memoirs being published?
There have been some in the West. Arthur Koestler's, for example, which ran into two or three volumes. They are much better written than anything I can hope to achieve. But in India I can't think of any autobiography (of that nature). Most memoirs are self-glorification.

How did you recall so many details of your encounters and experiences after so many years?
I've kept a diary for most of my life but I didn't have to consult it for writing this book. I have a reasonably good memory that abides with me. I am accustomed to noticing people's quirks and mannerisms; whenever I recall these persons, they come back. I've always been attracted to the ridiculous in people. I remember it forever. It's also selective memory—that's why nasty people stick in your mind and nice people fade out. But there are some people and some incidents that can never fade out. For instance, Giani Zail Singh once invited me for dinner at the Rashtrapati Bhavan. He was in his kachchas and a yellow safa tied around his head and took me to his bedroom and bolted the door after him. He then proceeded to fish out a bottle of Scotch and a soda bottle from under his bed. How can you ever forget the President of the Republic reaching under his charpoy for his soda! And it was the kind of bottle I hadn't seen for years—with a marble in its neck.

So, does your autobiography "inspire the younger generation"?
It proves you can write an honest autobiography without glorifying yourself. One thing that may come about is that readers will decide whether to accept a writer's truth or a politician's truth.