It creeps up unannounced and chokes its victim to death. Are we prepared to battle this killer virus? Updates 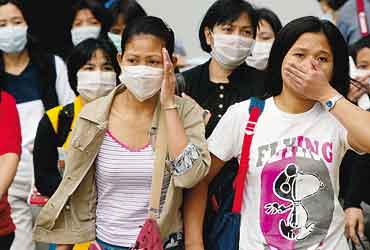 outlookindia.com
-0001-11-30T00:00:00+0553
To be prepared, and not to panic, is the prescription. Till surer remedy is found for the new, lethal pneumonia that has 18 countries, 13 of them in our neighbourhood, in its vicious grip. Because till a cure is discovered for SARS or the Severe Acute Respiratory Syndrome—a highly infectious viral infection that has already claimed more than 75 lives and infected over 2,200 people worldwide—only preparedness can be the best armoury in a battle against a mystery virus that's triggered panic all over the world. So, is India, with her huge population and a creaky public health infrastructure, prepared to combat a deadly disease like SARS?

"There is no cause for alarm, we are entirely geared to deal with SARS," Union health minister Sushma Swaraj assured Outlook. "Mechanisms to check, monitor and keep track of probable carriers of the virus who might be coming in from affected countries are in place, so also is the preparedness to isolate and treat SARS patients if required." The ministry of home affairs, state governments, airport and seaport authorities, government hospitals across the country, Indian embassies the world over with orders to issue travel advisories while issuing visas, have joined forces with the health ministry to launch an "offensive" against the virus: "We've even ordered that SARS detection kits, recently made available in Frankfurt, be imported. All our arrangements have been on time, we are ready."

If only the health minister's confidence were as contagious as the disease. For despite all the emergency measures being strategised by the government on a "war footing", many doctors feel there are still many gaping chinks in our armour. "The most important ally in our battle against SARS is information," observes Alok Mukhopadhyay, chief executive of the Voluntary Health Association of India. "But the public at large, and even private medical practitioners, still remain less aware than they should be about this illness." Pointing out that even the most experienced doctors in India would find it extremely difficult to diagnose SARS in an early stage since it mimics cold and flu-like disorders, Dr C.M. Gulhati, editor of the monthly medical journal mims India, says, "Much better guidelines for diagnoses and treatment regimes should have been made available to the country's doctors."

And then there are the historical reasons compounding the fear that an impending health havoc might be awaiting us. Not known for its efficiency, our public health system is barely equipped to deal with a disease so infectious. Isolating suspected patients is crucial to checking the spread of this killer flu. But isolation rooms that can ward off airborne contagion exist only in operation theatres for organ transplants, and are few. Also respirators, essential to ease suffering and even save lives of SARS patients, are in short supply, sometimes totally unavailable in smaller hospitals and nursing homes. India has failed to identify and tackle its own share of lethal fevers in the past: the Siliguri mystery fever that gripped the busy north Bengal town two years ago and killed over 30 people left our premier medical research facilities like the National Institute of Communicable Diseases (NICD), Indian Council of Medical Research and the National Institute of Virology clueless. (There were some reports that the Siliguri fever was caused by a virus similar to the Hendra virus of Australia or the Nipah virus of Malaysia, both animal-borne infections.) Even influenza-like fevers that grip Delhi's citizenry and are fliply called 'virals' go unidentified and untreated year after year.

Our best bet then seems to be in keeping the virus at bay. To prevent carriers of the infection from entering India. This seems like Mission Impossible, considering the fact that there are 18 airports with international operations in the country.Add to that the huge passenger inflow from some of the worst SARS-hit countries and the task shows up to be even more daunting. Sample this: according to tourism ministry figures, January 2001 to July 2002 saw about 66,000 arrivals from Singapore and 22,500 from China—countries that top the SARS-hit list. But civil aviation minister Shahnawaz Hussain is unfazed. "We've stationed doctors to help screen passengers at the international airports, alerted airline crew and ground staff to look for the flu's symptoms amongst passengers, introduced health ministry-formated proformas to be filled along with disembarkation cards to track probable carriers," he told Outlook. "We are in a state of serious vigil."

Better sooner than later. Like in China, which now has the highest SARS cases in the world at over 800. Considering that the SARS outbreak seems to have been centred around China's Guangdong province near Hong Kong, the country took its time before it reported the mystery flu to the World Health Organisation (WHO). By which time SARS had already taken a stronghold in China, and had fanned out to other countries. Including Hong Kong, where schools have been closed down after 180 SARS cases were traced to a single housing estate in the Kowloon district. In Singapore, where over 85 cases have been diagnosed, a nurse now awaits all airline passengers who get off planes coming from SARS-affected countries at the aerobridge. Passengers who look unwell are escorted to the Tan Tock Seng Hospital via a different route earmarked for the purpose. There they are isolated, and those who might have been close to them are quarantined.

"But let us not panic," maintains director of the NICD, Shiv Lal. "Please keep in mind that the mortality rate for SARS patients is quite low, only four per cent." Health experts, though, point out that four per cent is a high mortality rate for airborne diseases. But the WHO gives hope: "A significant number of cases in Vietnam, as a result of good supportive care, have improved. In addition, the global surveillance system has proven to be a very sensitive and rapid means of reporting suspected cases. Health authorities around the world are now alert to the risk of SARS. Information on cases compiled over the last three weeks is expected to shed new light on the behaviour of this disease. Secondary outbreaks have been avoided till now since global surveillance was put in place and rapid isolation of cases undertaken." Reasons, hopefully, to breathe easier.