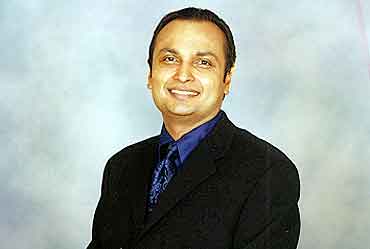 outlookindia.com
-0001-11-30T00:00:00+0553
Not the 'netas' (Abdul Kalam or Vajpayee). Not the stars (Sachin or Shahrukh). Not ex-saas No. 1 (Maneka Gandhi) or tele-saas (Smriti 'Tulsi' Irani). It was industrialist Anil Ambani who emerged MTVs first 'Youth Icon of the Year' in 2003 after an eight-city, 1,75,000-vote poll by imrb in the 15-24 age group. Ambani, vice-chairman and managing director of the country's largest private sector company, Reliance, spoke to MTV's Cyrus Broacha (and a sprinkling of youngsters) on what it means to be looked up to by Gen Next. Excerpts:

Given the choice, who would you have voted for?
Kalam. I look at his overall responsibilities, where he has come from, and (yet) leading India to become a science capital.

What is the one thing that stands out about today's youth?
India's youth are very, very ambitious. Very competitive. There is a great spirit to achieve success and reward. It augurs well.

With such a young population, do you think we'd be up there in 20-30 years?
Yes, we will have 500 million people in the 18-35 age group in the next 15 years. They will propel India into the future. As a country, we are going to play a very major role in the global arena, in literature, art, culture, economics, sport, in all facets of life.

What are the negatives you see about Indian youth?
They're losing touch with some of the grassroots principles of our society, our culture, our systems. I think we need to harness our core values, our religion, our spiritualism. This is what the whole world wants to learn from us. Indian youth shouldn't give up on that. The onus is on elders—at home, in schools, colleges—to guide them during their formative years.

What is your workload like?
Work is not a load, it is pleasure. Even a coolie at a railway station, who runs around all day, works hard. How diligently you work is the issue.

You were born in the lap of luxury...
Far from it. My father started out as an attendant at a gas station. My grandfather was a school teacher. We lived in a chawl called Jai Hind estates. For about 50 residents there was one common toilet. There was no lift. Through my school and college days, I either walked or travelled by bus. There was no question of luxury.

Who is your role model and what have you learned from him?
My role model can't be anybody but my father. The big lesson I learnt from him was that if you can dream, you can do it.

What's the most difficult thing being Dhirubhai Ambani's son?
Meeting the high standards he set for growth and aspirations as a visionary wealth creator.

Are you inspired by your children?
I am amazed at their level of awareness at 5-10 years on most subjects which I did not possess even when I was 15-20. Their techno savvy amazes me. Their adaptability inspires me.

What is the biggest risk you have taken in your life?
Facing Cyrus without preparation! But, seriously, there are risks and rewards in every decision. That does not mean you run away from risks. If you have to make a decision that may not turn out your way, it still should not prevent you from making it.

If you were to become prime minister, how would you change India?
To change India's future, education is the key ingredient. If you can educate the 300-400 million of our billion people who're uneducated, they can be unsurpassable intellectual capital.

All About The Zippies
APJ Abdul Kalam : '500 Million Young Will Transform India' ! Azim Premji: Writing Is On The Wall: Get The A,B,C Right ! Paromita Shastri : Tender Shoots ! Suveen K. Sinha : Age Of The Zippie ! Anil Thakraney: Moving To Gorakhpur With All Guns Blazing ! Manu Joseph: The Generation Why ! Velu Shankar: Teflon-Coated Bubble Wrap Cocoons ! Ajith Pillai: Dumbed Down? Who? ! Sanghamitra Chakraborty: The Next Stage Of Human Evolution ! Indrajit Hazra: 'Potential Genius'? Keep The Tag Intact ! Anil Ambani: "If You Dream, You Can Do It" ! Saumya Roy: Twixt Chawl And Mall Sanjoy Chatterjee: The World Is My Oyster ! Zippies: What They Want ! Javed and Farhan Akhtar: 'We All Have Our Struggles' !  Sadanand Menon: Mad Cow Disease Of Self-Consumption