If You Can't Have Cake

Call it the Brown Revolution. Flour power is in vogue with India's new-found craze for breads. 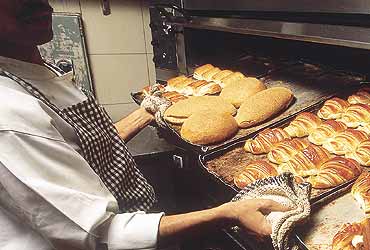 outlookindia.com
-0001-11-30T00:00:00+0553
Yeast does meet east and there's no dough(t) about it. From milky-white, country-brown to multi-grain, and whichever way you slice it, loafing around isn't just a pop-up morning toast and pao cottage industry anymore. Bread is an all-day blazing-ovens business valued at Rs 1,800-2,000 crore a year spreading over from breakfast to dinner. Trying hard and partly succeeding in elbowing out the chapatti, the "double roti" is beginning to do a double whammy on rotis and idlis in the metros.

Five years ago, people bought bread and used the wax or plastic wrappers the next day to carry paranthas to school and office. Today, most snack boxes hold sandwiches inside. Even vegetarians who once spurned bread are busy wrestling crowds for their plates of pao bhaji. And everyone from urban pao boys like Hot Breads, Subway and Barista, the doughkeepers of the nation, Modern and Britannia, to neighbourhood kneaders are introducing a new twist to their loaves. For right now, in the rapidly rising 20 per cent niché category, bread is perhaps the only food in India that is as much about changing tastes as it is about changing vocabularies and lifestyles.

Flour power is in vogue with everyone adding new grains to cash in on the boom. Modern and Harvest Gold, the largest bakers in India and Delhi respectively, have ushered in the brown revolution by launching atta and brown variants claiming their share of bread-as-health-food market. Nirula's in Delhi have introduced a specialty range of fibre-rich sugar-free breads made with heart-friendly olive oil. Hot Breads, an Indian company with an international presence, had a festival early this year where multi-cereal, six-grain, rye and spekkle loaves made of soya bean, wheat and malt flours were a sellout.

Patissier's Gallery, a five-outlet chain launched in Delhi last year, "hopes to take the market beyond roti to multi-grains and whole wheat. Our turnover today is about Rs 6-7 lakh," says Gagan Bhasin, director, operations. Even in Hyderabad, the city of biryanis, sheermals and naans, Malathi Reddy of the speciality store Bread and Bakes, confirms there is a growing demand for healthy breads and whole wheat and brown have become fast moving items.

Besides bakeries making fortunes, modern Earls of Sandwich are rising with profit. This September, Barista espresso bars, the haunt of caffeine sophisticates, introduced Italian Panini sandwiches. Made from the ciabatta and flat focacia breads baked at the Taj Group of Hotels, Paninis with chicken lyonnaise and mint mushrooms fillings are popular both as snacks and meals. Says Sandeep Vyas, executive vice-president, marketing: "About 34 per cent of our profits comes from sandwiches, desserts."

The newest arrival is Subway, the $30-billion sandwich shop from America that has overtaken McDonald's as the largest restaurant chain in the US. "Subway is health food," says Gurpreet Gulri, India development agent, "and since there is no one in that segment, we thought we could fit into the niché". Healthier and faster than a burger-fries-coke combo in terms of time and calories, Subway delivers a chicken teriyaki with veggies on a whole wheat roll in just 90 seconds. With a recipe bank for 15 rolls and a smorgasbord of fillings from salami to peppers—each day five varieties of breads are baked fresh on the premises.Gulri says at the four Subway outlets in Mumbai and Delhi, almost all rolls besides the asiago cheese have been a hit.

Guillaume Bonnety, bakery chef, Oberoi, Mumbai, who is busy fermenting apples with mineral water and yeast for sourdough bread, divides his clientele into "those who chose the bread to go with meals and those who make meals to go with the bread. Now, there are more Indians who are enjoying the flavour of home-baked rather than factory-produced bread. We use no preservatives with our imported flours like rye, wholemeal and fortified bran which have vitamins, minerals and fibre for digestion. These loaves need PR which I do, explaining what baker's bread is about—crisp golden crust, well-developed flavours and a smell of hazelnuts."

It's the same welcoming aroma that you find in Hot Breads outlets, which have an on-site bakery. Launched in 1992 by M. Mahadevan, a software professional-turned-doughman in Chennai, Hot Breads has 28 locations in India and 12 abroad. "Using European machines to make hard crust breads, customers initially rejected the authentic crust," says B. Srikanth, director B&M, "but now people like the real thing and our collective turnover is Rs 3 crore. Domino's have a 50 per cent stake in Delhi. Our proudest moment was when we opened in Paris in 1999." In a city whose population swears allegiance to their corner bakery before their flag, Parisians today walk into Hot Breads hankering for masala bread as well as French loaves (baguettes).

While people have tried hard to bite down on the full-bodied brown bread, most prefer the softer-white maida option which is easier to eat. In India, soft white bread dominates the market split in a 20-80 ratio between the organised and unorganised sectors. What that means in real terms is that maida is the main ingredient in the branded sector, while chuna (quick lime) is used to bleach poor-quality flours at the lowest end of the market. Business is booming for all, including leaders Modern and Britannia, makers of mostly white, some brown and some atta bread. "Since acquiring Modern, our market share has increased from 1,300 lakh standard loaves to 2,300 lakh loaves and sales values from Rs 78 to 140 crore," says a Hindustan Lever spokesperson.

Capturing the middle space—between bread and roti—Arjun Ompal Singh's Arctic Bread was launched in north India this year, with a Rs 10 crore investment. Made of wheat, fibre and with fructose, Singh believes his round spongy flatbread "fits into our culture as breakfast food and accompaniment to sabji and meat curries." Selling 5,000-6,000 packets of Arctic per day, Singh is waiting for the market to mature. Research consultancy ksa Technopak predicts a 7-8 per cent overall annual growth in the business with a faster growth of 15-20 per cent in the niche category.

With benedictions and blessings like this, and flavoured with new world grains, seeds, nuts and cereals, stuffed and filled with garden greens, cold cuts, hot dogs and slathered with butter, chutneys, mustard and mayonnaise, the baker's dozen are here to pirouette on your plate. Clearly, the sun is rising from the y-east.