'If We Can Have Bullet For Bullet, Why Not Blast For Blast?'

The niece of Nathuram Godse, married to Veer Savarkar's nephew, is the president of the Abhinav Bharat... 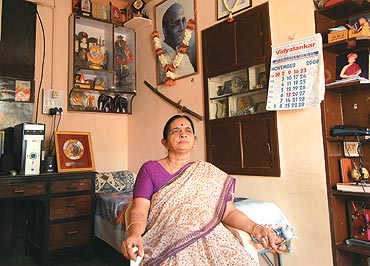 Till 2000, Himani Savarkar was an architect. That’s when she discontinued her practice to become the president of the Hindu Mahasabha. The 61-year-old Himani lives in Pune and her hardline Hindutva roots are well-entrenched. She is the daughter of Gopal Godse, the brother of Nathuram Godse, and is married to Veer Savarkar’s nephew. Himani is also the president of the Abhinav Bharat. Some members of the organisation have been linked to the Malegaon bomb attack of September 29. Himani spoke to Outlook. Excerpts:

How did you become the president of Abhinav Bharat?

I had known Sameer Kulkarni (the Maharashtra ATS has alleged that he was part of the team that provided logistic support for the Malegaon blasts) for quite some time. Like me, he was also part of the rss. When he decided to start Abhinav Bharat, he approached me to become its president and I accepted.

What are the objectives of Abhinav Bharat?

Our aim is to fight terror—spread awareness of who the real terrorists are and teach people how to oppose terrorism. This...