If Thou Art So Inclined 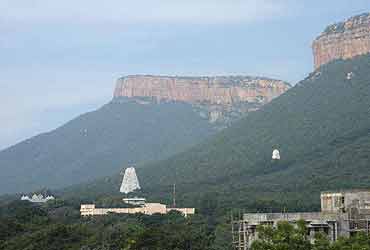 So it wasn't surprising that the globalisation-friendly Chandrababu Naidu government drew up ambitious plans to develop Tirupati as a tourist spot as well. The project included a religious theme park (Rs 20 crore), multiplex shopping complex (Rs 16 crore), star hotels and a Rs 91-crore ropeway from Alipiri to Tirumala. The ropeway would waft pilgrims to the hillock while allowing them to take in the scenic sight below. In 2002, the Tirumala Tirupati Devasthanams (TTD), which runs the temple, allotted Rs 117 acres at Alipiri, the foothills of the Tirumala, to the state's tourism development corporation (APTDC) for the scheme.

However, there was strident opposition from the Agama Advisory Committee (panel of priests and experts who have the say over the temple's traditions) and prominent pontiffs like Chinna Jeer Swamy and Kanchi seer Jayendra Saraswati, forcing Naidu to cancel the project a year later. The land was then returned to the TTD.

However, two weeks ago, chief minister Y.S. Rajasekhara Reddy gave the go-ahead to the ropeway and asked the APTDC to take up the scheme in a time-bound manner. He opines that the cable car will reduce pollution and curtail accidents on the ghat road. But horrified local Agama advisors regard this as a deadly sin. They believe that the 6.3-km cablecar ropeway to Tirumala will violate the age-old shastras and traditions. According to them, the ropeway would disturb meditating deities, saints and spirits present among the Seshachalam hills in invisible form.

"The hill on which the temple stands is Vishnu swaroopam (Lord Vishnu's form). To travel over the Lord's head is a cardinal sin," says C. Rayabhattacharyulu, an Agama expert. He adds that if the government insists on going ahead with the project, several powerful religious bodies would move court to obtain a stay order to ensure there's no violation of the holy airspace.

Another open opponent of the project is the Vaikhanasa Peetham, a powerful religious institution at Tirupati. G. Prabhakaracharyulu, in charge of the peetham at Tirumala, says the devotees come for the Lord's darshan with purity of thought. "The government is trying to convert a holy place into a picnic spot. I mean, do you really want to see an imax theatre here?"

Interestingly, the temple's chief priest Ramana Deekshitulu, who also heads the Agama Advisory Committee, is reluctant to voice an opinion. "We need to examine the Agama shastras, puranas and dharma shastras and then brief the TTD," he says. Asked how the same board that objected to the cable car in 2003 could possibly okay it now, Deekshitulu says two members had opposed it then. "But the committee will examine it afresh. Whatever decision is made will be collective."

Meanwhile, APTDC chairman and managing director J. Raymond Peter says the visitors' zone project is an important part of the government's plan to develop Tirupati into an A-class tourist destination. The cable car, says Peter, won't fly over the temple but would transport 40,000 pilgrims every day to its base. Peter, who is back in India after a five-year stint with the World Bank in the US, feels the AP government should follow the American method of utilising the existing infrastructure of a place and developing it into a tourist destination. "Providing hotels, parks or a ropeway at Alipiri will induce tourists going to Tirupati to stay back longer. Think of the employment this would generate," says Peter. As the arguments continue, the gap between local religious sentiments and American-inspired mass tourism grows ever wider—perhaps too wide for the ropeway to bridge.

Is The Ride Over?