If The Soot Don’t Wash

With Coalgate exploding, both Congress, BJP blacken each other up 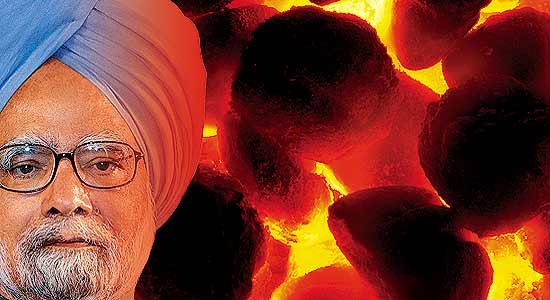 Why BJP Is Holding Parliament Hostage

Why BJP Can’t Pull Back

On the embers of the coal scam a national contest has begun. As the countdown for 2014 starts, the soot seems to have settled on the visage of Prime Minister Manmohan Singh who held charge of the coal portfolio for a long stretch. Still, it’s a game of ash, smoke and mirrors, with the BJP resorting to the scorched-earth tactic of disrupting Parliament to force the PM to resign. The BJP believes it occupies the moral high ground. The Congress has responded by trying to spread the coal ash around a little more evenly, and maybe also blacken the rival’s face. It’s a “tera muh bhi kaala” (your face is also black) display of competitive politics.

The coal scam raises critical questions about how policy pertaining to national resources should be formulated and implemented. Both sides have also had their say on it. With Parliament derailed, last week the debate continued in the TV studios and, for the more complex points, politicians shifted to the editorial pages of newspapers. Leader of the Opposition in the Rajya Sabha Arun Jaitley wrote an opinion piece in The Hindu, the same day Union law minister Salman Khurshid wrote his take in The Times of India, while Congress spokesperson and MP Manish Tiwari made his points on the op-ed page of Indian Express. In typical Congress style, the PM’s defence was upgraded from routine to high-decibel after Sonia Gandhi asked the troops to rally behind. She told party MPs to fight back “aggressively”, adding: “Blackmail has become the bread-and-butter of the BJP...this is the handiwork of just one party, the BJP...once again showing up the scant respect it has for democratic values.”

Called to attention, the very next day the Congress produced Union HRD minister Kapil Sibal at its 24 Akbar Road headquarters as Parliament took a day off for Onam (the session continues at the time of writing in spite of disruptions). That was the day the Naroda Patiya verdict came and a former minister in the Narendra Modi cabinet was convicted. In ordinary times, the Congress could have been expected to take a few swings at the BJP in general and Modi in particular. But on August 29, the party had tapped into a new purposefulness. Sibal gave the most thorough and political defence of the PM on Coalgate. A document titled, ‘Selective Amnesia, Mr Jaitley?’ was circulated which sought to list the occasions when the BJP had questioned CAG. (About the CAG report on the Centaur Hotel divestment in February 2004, Arun Shourie, then minister for disinvestment, had said, “...the methodology of computing national losses is idiotic, sorry peculiar”. In 2001, when the CAG report on coffin purchases came out, Jaitley had said, “The CAG is an institution appointed to find faults.” And then defence minister George Fernandes had added that “CAG has acted unethically”.)

The PM may be the most visible face linked to the scam but there’s no end to the BJP’s loot in Jharkhand, not to forget the Reddy brothers....

Another document, titled ‘The boot is on the other leg, Mr Jaitley’, was also released. This sought to highlight the procedure for coal allotments followed by the NDA and the questionable deals of the BJP. Sibal and Jaitley, two great rivals of Delhi’s legal and political circuit, were sharpening their knives for the coal battle. Clearly, there is no end to the amount of mud one side can fling on the other when it comes to coal allotments (perhaps the original sin vis-a-vis India’s criminal approach to its natural resources). The PM may be the most clear, visible face linked to the scam at the present juncture but there is no end to the BJP’s loot in Jharkhand, not to forget its links to the notorious Reddy brothers, the mining barons of Karnataka/Andhra, and other dubious figures. There is, for instance, the matter of Ajay Sancheti—a contractor with close links to BJP president Nitin Gadkari who has been rewarded with a Rajya Sabha berth. His name crops up in the Adarsh scam in Maharashtra. The Chhattisgarh CAG report mentions a mine he has been allotted by the Raman Singh government. Besides, according to CAG findings, on June 29, 2010, the state government did him the favour of staying a tax penalty of Rs 17 crore ordered on his company, Shivnath Infrastructure Ltd! Just after the report was tabled, BJP MP and ex-mining minister Ramesh Bais echoed, “If Gadkari’s close associate can get a coal block, then why not me...I am a member of Parliament after all.” Why not indeed.

So clearly when a leader like Sushma Swaraj states that the Congress got “mota maal” (lots of cash) from coal allocations, she also opens her flanks to a counter-attack. Which is why one must pause and ask, why has the BJP taken the pitch so high? Why has the party risked middle-class censure for further undermining an institution like Parliament? What has got them so worked up that even someone like Jaitley—who enjoys the thrust and parry of a good parliamentary debate and usually opposes disruption—has made an argument for disorder? 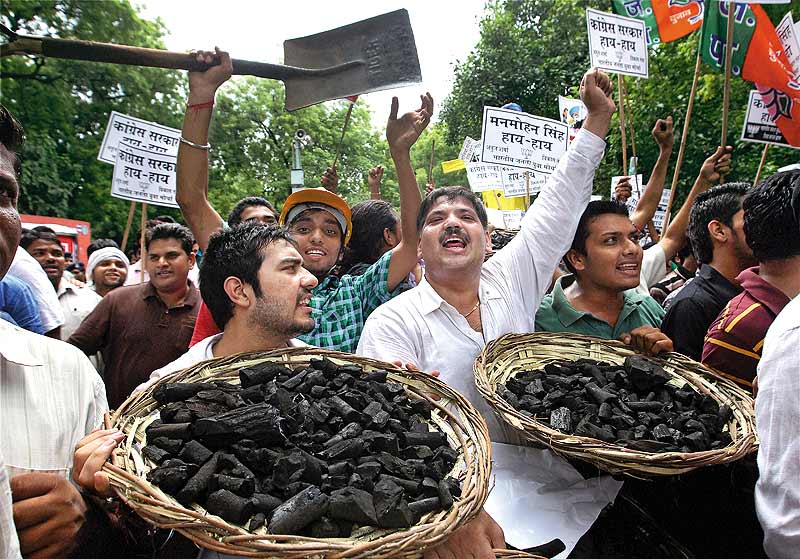 There’s a simple political calculation at the heart of the BJP tactic. The belief that the Congress is sinking and this is the opportunity to corner it. Senior party leaders concede that the muck is also being flung at them. But they feel it is not sticking and the greater damage is being done to the Congress. As a political force, the BJP’s DNA is very different from the Congress, which is a rambling sort of organisation. The BJP, by contrast, is a more cohesive unit in spite of all the factional feuds and existential issues that confront them.

And currently the party has sensed opportunity both on the corruption and communalism planks. First, the Anna Hazare movement, once backed by the RSS, appears to be unravelling and strategic decisions have been taken by the Sangh parivar that the force of the cadre should now be shifted back to the party as opposed to what was presented as a spontaneous people’s movement. There is therefore an attempt to channel the anti-corruption urban rage back in a direction that would have a more conclusive political outcome. The Muslim settlers debate triggered by the Assam events also creates a climate that the BJP finds more salubrious, a national atmosphere when issues that it calls “emotional” are more likely to click with and galvanise potential voters.

The BJP is after all a proven practitioner of the technique of outshouting opponents and of repeating something so many times that the public at large finally starts to believe it. The current strategy is not to force a mid-term election as the party knows it does not have control over that scenario. It is to keep the Congress off balance as it enters the season of crucial assembly polls. There are critical BJP-Congress contests in the run-up to 2014.

First the big face-off in Gujarat that the Congress will almost certainly lose (although there is always the hope that somehow Modi’s victory margin can be reduced). As the Himachal Pradesh elections take place at the same time, the Congress is hoping a victory there against the ruling BJP will help it enter the year 2013 with its honour intact.

In May 2013, the Karnataka elections take place. This is one state the Congress should logically wrest easily from the BJP, the third smaller player being the JD(S). Yet Congress insiders worry about factionalism, the leadership question and the greater money power of the BJP. So here too there is anxiety, and about a state that should have been a cakewalk for the Congress. Worse news could come for the party in October next year when four assemblies, Madhya Pradesh, Chhattisgarh, Rajasthan and Delhi, go to the polls, all states where direct Congress-BJP contests take place. Currently, two are held by the Congress and two by the BJP. But while the general perception is that the BJP will hold on to Chhattisgarh and MP, at the Congress headquarters people say with certainty that Rajasthan CM Ashok Gehlot will be defeated  and that Delhi will be a “close call”. And this is happening at a time when 12 ministers of the Shivraj Chauhan regime in MP face CVC inquiries and several scams have erupted. Yet the BJP is seen as almost invincible in certain states.

Which is why the BJP has currently decided to gloss over the troubling questions of leadership and maximise whatever little opportunity it sees in the future. In the process, the party is certainly taking risks, exposing its own flanks and coming through as an irresponsible force with scant respect for institutions. There has also been some difference of opinion with allies but the larger belief is that ultimately the smaller parties—who are playing a wait-and-watch game—will rally around if the strategy appears to be working.

The Congress conversely is rattled and waiting for some sort of clarity in September when a cabinet expansion/reshuffle is expected and, more significantly, Rahul Gandhi could come out to play a bigger role and give some deliverance from the current season of hopelessness. At the party headquarters, a veteran observed gravely that the fact that Sonia Gandhi has taken the initiative to counter-attack (after a long time) is being seen as a “good sign”, besides of course the fact that Rahul Gandhi “has to take the plunge as there are no choices left”. As usual, in the unique power-sharing arrangement between party and government, the members of the dynasty remain untainted while the PM and his regime absorb all the taint from coal dust.

By Saba Naqvi with Yashwant Dhote in Raipur