If Only It Was An Internal Matter...

In Andhra, Satyam was a favourite of all parties. Perhaps that's why they are playing shy. 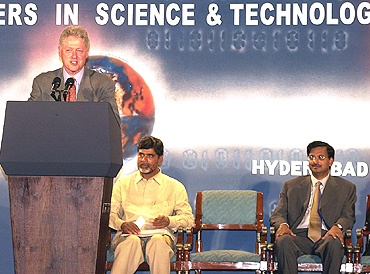 When the Congress came to power in ’04, the Y.S. Rajasekhara Reddy government provided an even more salubrious climate for the Rajus. Sources say that he has friends in the BJP’s central leadership as well. Raju reportedly "funded" pre-election surveys done by a "native" psephologist for the party around the country. Indeed, a TDP leader described Raju as "an opportunist", not inclined in particular towards any political party but "loyal" as long his work gets done.

In fact, the lasting image of Raju from the TDP era is that of him sharing the dais with former US president Bill Clinton and Chandrababu at a CII conference in Hyderabad. Under Congress rule, he went on a real estate buying spree and snapped up a slew of prestigious projects that include the Rs 12,000 crore metro rail scheme, the Rs 1,500-crore Machilipatnam Port project, and three SEZs in Kakinada.