...India falls. You and I know this. Unfortunately, so do the terrorists, the bearded fanatics who run Lashkar-e-Toiba, SIMI and Al Qaeda 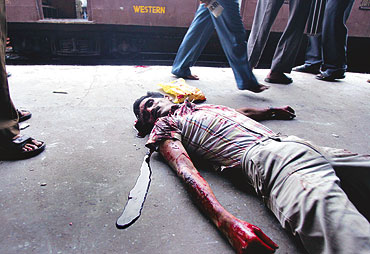 outlookindia.com
-0001-11-30T00:00:00+0553
Mumbai is too good to burn. City of Gold, Maximum City, City of Dreams are adequate but partial descriptions. It is all this and much, much more. While we admire Mumbai's exuberance, its vitality, its generosity, its resilience, we cannot ignore its contradictions and paradoxes—and, yes, its meanness. It is a city at once blessed and cursed, lucky and unlucky, unique and commonplace. It is blessed because the goddess Laxmi favours it extravagantly and because it, and it alone, is India's true melting pot—of peoples, of tongues, of religions, of castes, of cultures.

Consider the city's Muslims. You will find every variety in the Ummah. From the bacon-eating (remember M.A. Jinnah?) to the five-times-a-day namaazi. Shia, Sunni, Bora, Khoja, Aga Khani, Ahmadiya. They live, laugh and flourish in Mumbai. Majrooh Sultanpuri's Nobel Prize-worthy song, Yeh hai Bombay meri jaan, is a good summing up of its spirit.

Consider, too, its mostly sweat-and-blood wealth. Bangalore is an arriviste, a new entrant; when you think of India as a 21st-century economic superpower, your mind turns immediately to Mumbai. This is the real business, financial and services capital of India. This is where the Tatas, Birlas, Ambanis and Singhanias conceive and execute projects which bedazzle Forbes and Time. You merely have to note Mumbai's contribution to the country's personal and corporate tax collection to get some idea of its primacy.

So much for the blessings. The city is also cursed, thanks to people like Mr Bal Thackeray, forever prowling around exploiting and fanning its self-manufactured grievances and grouses. Since the early '80s, Mr Thackeray has managed to win a small, nasty constituency. Historians will one day assess what permanent damage Balasaheb inflicted on Mumbai's free, cosmopolitan character.

The bearded fanatics who run Lashkar-e-Toiba, SIMI, Al Qaeda understand Mumbai's blessings and its curses. If they can somehow wreck its twin blessings with a little help from Mr Thackeray, they would have succeeded in perpetrating financial and communal havoc on a society which is a stinging rebuke to their narrow ideology. No wonder, Mumbai is the world's most targeted city.

Since 1993, despite provocations, Mumbaikars have studiously rejected calls to destroy the city's social and economic fabric. We cannot, however, remain complacent. The imminent demise of the Shiv Sena and with it, hopefully, of the BJP's flirtation with fascism, is a good sign. It must remain our collective task to protect, sustain and nourish Mumbai. If Mumbai falls, India falls. You and I know this. Unfortunately, so do the terrorists.