"If I Weren't A Sanyasin, He Would Have Married Me"

A dapper PM. An alluring godwoman. A bunch of letters and a still-born child. Outlook unravels a little-known Nehru story... 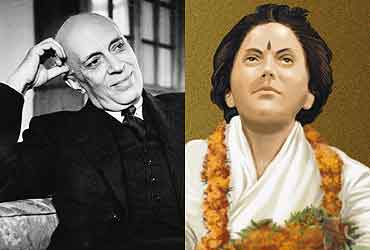 One day in April 1949, Dr Ezekiel, a lady doctor working in a hospital near the Cantonment Station in Bangalore, took pity on a pregnant woman who was thrown out of a hospital because she refused to divulge her name or address. All that Dr Ezekiel knew about the woman was that she was from North India and looked affluent, although she had very little money on her. So taken in was Dr Ezekiel by the woman in her early 30s that she rented a small house for her in the Benson Town area for Rs 50, bought her provisions, arranged for a dhobi and took her twice by taxi to a Roman Catholic hospital in the Civil Station for examination.

The would-be mother spent a month in Bangalore reading and re-reading from a packet of letters she carried with her at all times, keeping them under her pillow when she slept. After one false alarm, she was rushed to the Catholic hospital on May 30, 1949, where she delivered a stillborn child the same night. She stayed at the hospital for nine days and returned to her rented home to recuperate for another 10 days before she finally took the flight back to Delhi on June 19, promising to repay her debts to the Ezekiels which amounted to Rs 600.

She forgot, however, to carry her precious letters back with her. They were intimate letters written to her by the Prime Minister of India, Pandit Jawaharlal Nehru. She was Shraddha Mata, a young attractive sanyasin whom Nehru appeared to be besotted with.

A retired chief justice of the Punjab and Calcutta high courts, Debi Singh Tewatia, a friend of the sanyasin, revealed to Outlook the full story of the Nehru-Shraddha Mata relationship. This is how it goes:

The Ezekiels never heard from Shraddha Mata again. When even the letter they sent her at the address she had given—c/o Asutosh Lahiri, gshms, New Delhi, was returned unopened, Dr Ezekiel's husband turned to Dr Karamchand Wade, a Hindi scholar and a friend, for help. Was there any clue to her whereabouts, Ezekiel wanted to know, in the packet of letters which she had guarded so jealously but had forgotten under her pillow when she left?

Wade needed only one glimpse of the first letter, sent from Government House, Lucknow, on March 2, 1948, to recognise the handwriting of Pandit Nehru. The other letters were also from Nehru, addressed to Shraddha, and "of an intimate nature". Wade, an ardent admirer of the prime minister, was alarmed about the consequences to Nehru's reputation.

He paid Ezekiel the Rs 600 that Shraddha had borrowed and kept the letters. Wanting to deliver the letters personally to Nehru, he wrote to Nehru's private secretary A. Vithal Pai, whom he knew. But Pai's reply was not encouraging. Neither he nor the prime minister, Pai wrote, thought Wade should put himself to the trouble and expense of coming to Delhi to deliver the letters. He suggested that Wade send them by registered insured cover to Pai's residence instead. Pai airily dismissed Wade's claims of holding incriminating letters that would damage Nehru's reputation. "It is of course possible that misleading and plausible interpretations might be put on one or two chits that you may have seen," wrote Pai, "but the Prime Minister himself is not worried about improper or malicious use being made of them. I shall however wait to see the letters when you send them to me."

Wade wrote to Pai again, quoting from one of the letters in which Nehru says he may be able to see Shraddha Mata late at night after 10 pm. But Pai was unfazed. "No one need put any malicious interpretation on it," he wrote. "The importance we attach to your letter is not because of any interpretation that can be placed in the message that you quote, but on the fact that what you say shows up the woman in a very bad light."

But the tenacious Wade decided to travel to Delhi and deliver the papers to Nehru in person.Nehru met him and gave him one of the more innocuous letters from the packet as a keepsake. It was for identifying himself in case Wade ever needed to see him again. Nehru also gave him an exclusive phone number where he could get in touch with him and offered him some assignments. But Wade turned down the offer, saying that he had taken the trouble to get hold of the letters and deliver them to him out of a patriotic spirit and regard for the prime minister's reputation.

Shraddha Mata was first introduced to Nehru in 1948 in what could have been a Hindu Mahasabha plot to subvert Nehru's secular plans for India! Hindu Mahasabha chief Shyama Prasad Mookerjee, who first saw Shraddha Mata in Calcutta, mesmerising large assemblies with her lectures on the Vedas, invited her to Delhi. She had an equally impressive debut in Delhi where she addressed several meetings on her vision of a Hindu India. Aware of Nehru's susceptibility to attractive young women, Mookerjee tried to get the prime minister to meet her. At first, Nehru, with his innate disgust for godmen and godwomen, refused, but Mookerjee recruited a friend, Jagat Narain Lal, to take her to the prime minister's residence with him. One look at the shapely woman apparently bowled Nehru over. The 15-minute private audience he had granted her stretched to an hour and a half, and many more followed, usually late at night.

By March 1949, Hindu Mahasabha leaders were celebrating the success of their ploy. Outlook's research reveals that the Intelligence Bureau (IB) intercepted and forwarded a letter from the Mahasabha's Ashutosh Lahiri to V.D. Savarkar, to home minister Vallabhbhai Patel. Lahiri was crowing about Shraddha's "active contact" with Nehru. "I believe that higher powers are guiding the destiny of India. Who knows that this new contact, if it effectuates, might lead to quite new developments," he wrote.

On March 4, 1949, Patel forwarded the letter to Nehru, asking him for an explanation. Nehru replied the same day, dismissing the whole affair lightly: "...it is perfectly true that the lady in question has met me several times in Delhi and Lucknow.... (We) usually discussed two subjects—the Hindu Code Bill and the question of language, that is, Hindi. She tried to influence me in regard to these two matters and I tried to influence her the other way. I don't know what success I've had, but she had none, so far as I am concerned."

Shraddha was more candid. In an interview with Khushwant Singh 15 years after Nehru's death, she said: "At the very first meeting that took place in the house on Aurangzeb Road, we established a rapport which seemed to indicate that we had known each other in our previous lives. I could see Panditji was attracted to me. He was impressed with what I had to say. And I do not deny that he was attracted towards this (pointing to her face and features). I met him many times and for many hours at a stretch. I sensed his growing attachment to me. He asked me many times about my marriage and my husband. I can say that had I been free and not taken the vows of a sanyasin, it would have been me and not any of the other women whose names have been linked with him (Lady Mountbatten, Padmaja Naidu, Mrinalini Sarabhai) that he would have wanted to marry. But it never came to it. I told him quite firmly that I was a sanyasin and that he, as a Brahmin, was expected to honour Hindu traditions." Shraddha, of course, denied that the relationship had ever gone beyond the platonic, but Khushwant was not convinced. "It was quite clear from all that she said that they did have an affair," he told Outlook.

In 1976, Justice Debi Singh Tewatia received a letter from Dr Wade asking for an appointment. They met. Wade, in his 80s then, produced the one letter that Nehru had let him keep.It was an innocuous two lines, but the story that Wade told Tewatia about what seemed to be Nehru's illegitimate child was startling.

The irony of fate was that Tewatia had known Shraddha Mata since 1952, when he and the sanyasin were residing at the same boarding house on 48, Parliament Street in London, and knew about Nehru's relationship with her. "She was an orthodox Hindu and a very good orator," says Tewatia. Her face was rather plain but her voice, Tewatia recalls, was bewitching, especially when she sang Meera's bhajans. The young law student and the sanyasin met frequently and engaged in animated discussions on theological matters on which she was very well informed, devouring books in Hindi and English that lay in piles all over her room.

Tewatia learnt that Shraddha was born in Sultanpur, given in adoption to her paternal aunt, the queen of a small principality near Ayodhya. Married at 14 to a distant cousin, an advocate from Agra, she sought refuge within two weeks of her marriage in Gandhi's ashram. She later fled to the Himalayas, emerging as a full-fledged sanyasin at 26, sought out as a powerful orator and a living goddess. Shraddha did not make a secret of her political connections, especially with Nehru. Tewatia was himself an admirer of Nehru and it was to disabuse him about his idol that Shraddha told him of her intimacy with him. "I was arguing with her about the irrationality of palmistry when she suddenly said, 'You think Panditji is a rationalist? He used to extend his palm for me to read like a child'," he recalls.

Shraddha seemed to know the then vice-president, Sarvepalli Radhakrishnan as well. When she was ready to return to India a couple of years later, she asked Tewatia to call Radhakrishnan. The number she gave him was of a hotel in London, and Radhakrishnan came on the line immediately when he learnt that the call was from Shraddha. It was the vice-president, says Tewatia, who arranged for her flight back home within a week of her calling him.

Tewatia met her again almost a year later in August 1955 in Faridabad, Haryana. Her cottage was fenced in with a barbed wire guarded by several fierce dogs. One of her disciples let him in. They were both travelling to Delhi that afternoon and Shraddha offered him a lift in her new Packard car. The driver was a handsome Frenchman, Tewatia recalls. Her distaste for foreigners seemed to have vanished by then. "She even asked me if I had found a foreign wife for myself and when I reminded her that she was against Indians marrying foreigners, she said: 'Indians are very bad. Foreigners are much better'."

Tewatia's next encounter with the sanyasin was in 1966. "She was staying in Rajasthan House and I went to see her. She was quite changed. She had lost a lot of weight and her views were more progressive. She had become a leftist. She said something about Indira Gandhi I didn't understand then. She told me, 'Woh chudail mere peeche padi hui hai (that witch is after my blood).' Tewatia did not ask her why. Ten years later, when he met Wade, he understood.

Tewatia met Shraddha once again in 1985. He had arrived in Jaipur as one of a baraat party for the wedding of a nephew, and heard the night before his departure to Delhi that Shraddha was living right behind his hotel in an abandoned fort gifted to her by a devotee. She had changed almost beyond recognition, having become diabetic. But she was as friendly and hospitable as on their first meeting in London. It was the last time they met.

Shraddha Mata, quite possibly the mother of India's first prime minister's still-born child, passed away in 1987.

A Fair Man Among The Fowl