Home  »  Magazine  »  Sports  » The Straightest Bat »  As An Eventful Career Draws To A Close, Gambhir Steps Out Of His Crease For Social Work

As An Eventful Career Draws To A Close, Gambhir Steps Out Of His Crease For Social Work 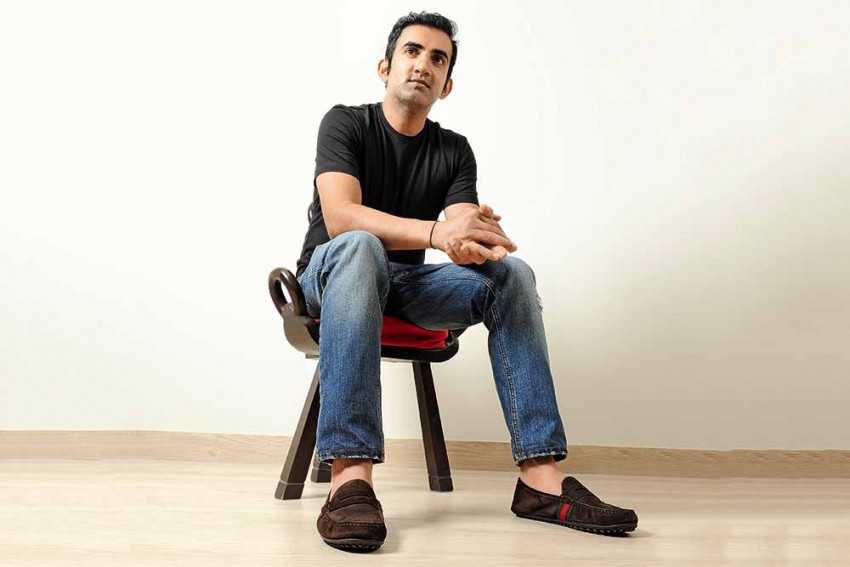 Photograph by Jitender Gupta
Qaiser Mohammad Ali December 13, 2018 00:00 IST As An Eventful Career Draws To A Close, Gambhir Steps Out Of His Crease For Social Work 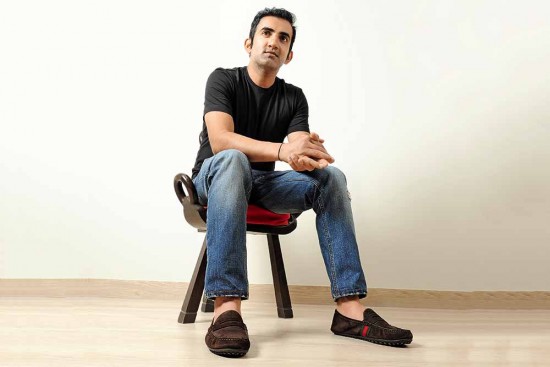 Renovation work is progressing at a fast pace at Gautam Gambhir’s home in Delhi. He will move into his tastefully redesigned abode only in January, but the second-floor lounge that houses his trophies and mementoes, collected over 25 years, is complete. The oldest silverware in his cabinet is the Man-of-the-Series trophy he won in 1993, representing the Ajmal Khan Cup-winning Ramjas Road XI; the latest is a Man-of-the-Match award at the IPL in 2017, leading Kolkata Knight Riders.

But Gambhir’s latest memento is a silver plaque that the Delhi and District Cricket Association presented him on December 9 after his last competitive match, a draw against Andhra in the Ranji Trophy. Most aptly, the 37-year-old left-hander signed off with a ton. It signalled the end of a sumptuous, satisfying career. Spectators and viewers would remember his sturdy strokeplay—the punches and fierce cuts on the off; dances down the track to hoist spinners out of the ground, the bat not completing the pleasing arc of a complete follow-through (like, say Yuvraj Singh) but held in mid-air, lending his batsmanship not languid, fluid grace, but an air of solidity and dependability.

Several options beckon him now. “I’ve done a bit of commentary; only three T20s, but it doesn’t give you that action. Coaching is another option. But I’ll evaluate which will be the place I’ll enjoy going to. I’m someone who loves being part of action, so I can do that by going into coaching or by being a mentor,” Gambhir tells Outlook.

Gambhir’s has been an eventful car­eer, which fetched him 4,154 runs in 58 Tests, 5,238 in 147 ODIs and 932 in 37 T20 Internationals. His grand aggregate of 22,484 runs—10,324-plus runs in List ‘A’ mat­ches—makes him the second Indian behind Sac­­hin Tendulkar (24,452). But the Delhi cricketer’s philanthropic activities, under the Gautam Gambhir Foundation (GGF) equally define the man. He’s sponsoring the education of 50 children of CRPF personnel killed in action; bearing the education expenses of Zohra, daughter of a Kashmir cop who was killed in a shootout with militants last year; donated Rs 4 lakh to the crippled Ice Hockey Association of India for sending the team to a tournament to Kuwait in 2015; helped cancer-stricken 1998 Asian Games gold medallist boxer Dingko Singh and org­anised a-meal-a-day community kitchen in Delhi. If one is only aware of his belligerently patriotic tweets, there is context and ‘action’ beh­ind them. “If there are selfless people in India, they are soldiers. They are the real heroes. That’s why I am fascinated by the uniform,” he emphasises. 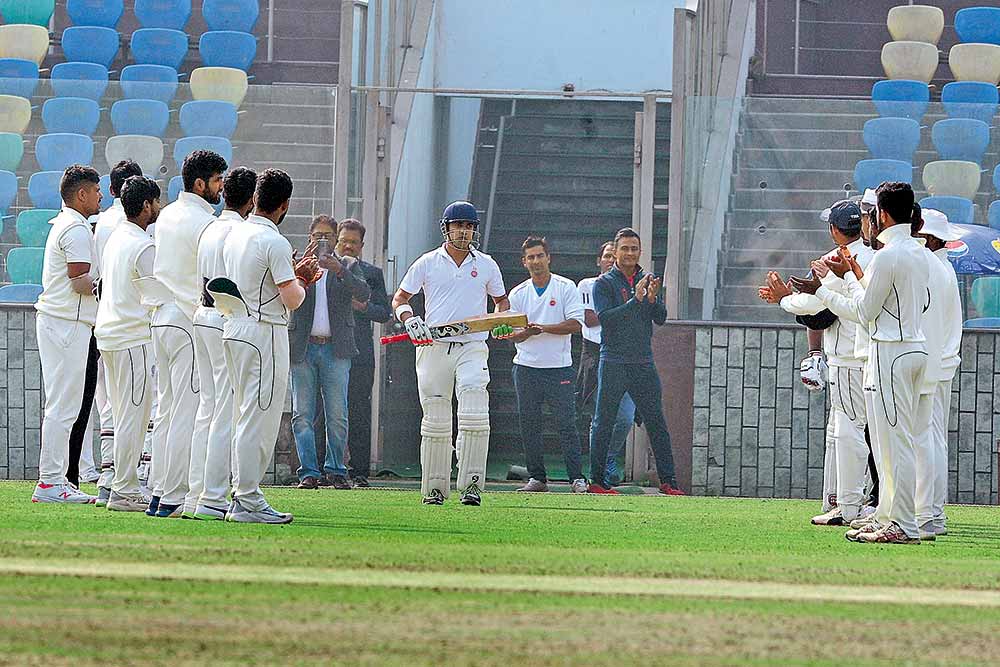 Gambhir captained all teams he played in, except India in Tests. He retired on a high: 266 runs in three Ranji matches (top).

The foundation plans to amend the kitchen programme. “Some shopkeepers were eating meals from the kitchen while the really needy weren’t. So, we stopped it. We plan to provide meals to students of classes IX and X at Delhi government schools. The government provides mid-day meal only till class VIII, and many students drop out. We’d ensure that they study at least till X. We’d seek the government’s permission,” says Gambhir. The GGF’s latest mission is related to Delhi’s environment, under which it requests people to adopt a tree. “We ask school principals to tell each student to adopt one tree with his/her name on it and take care of it, so after 12 years he/she leaves a legacy,” informs Gambhir.

This year, the Delhi Daredevils captain brought children of CRPF personnel to Delhi and took them to the Ferozeshah Kotla to watch an IPL match. Gambhir says the paramilitary forces are a relatively neglected lot. “Paramilitary forces like SSB, CRPF, BSF, and ITBP don’t get as many facilities as the army, navy or air force. So, we thought we’d try and help those kids,” he says.

Of Gambhir’s many pivotal knocks on the field, he picks his marathon, almost 11-hour, 436-ball 137 against New Zealand in Napier in 2009 as his “biggest achievement” in Test cricket. That knock saved the match, after India had followed on. In ODIs, his most prominent knocks were top scores in the finals of the 2007 T20 World Cup in Johannes­burg (75 runs) and the 2011 World Cup in Mumbai (a stupendous 97 runs). He was shattered when he wasn’t declared Man of the Match. “I would lie if I say that it didn’t hurt. And it will, because growing up as a kid you want to be a Man of the Match in a World Cup final,” he admits.

Ironically, Gambhir, a traditionalist, took to the IPL like a duck to water, captaining the Kolkata Knight Riders to the crown twice, in 2012 and 2014. He also holds the all-time IPL record of cracking the most boundaries (491) and is the joint scorer of maximum half-centuries (36) with David Warner, besides being the fourth overall run scorer (4,217 in 154 matches).

Gambhir has captained almost all the teams he has represented—from that of his alma mater, Modern School (Barakhamba Road, Delhi), employers ONGC, the various Delhi teams, India in ODIs—and regrets not leading India in Tests. He retired on a high too, when he looked in good touch, after tallying 500-plus runs in Vijay Hazare Trophy and 266 in three Ranji matches this season.

Last year, the Union sports ministry appointed Gambhir as a government nominee on the DDCA executive committee, triggering talk of a political career. “I haven’t thought about politics till now and there is no such inclination,” he ‘cuts’ the talk in usual, emphatic fashion.

For now, Gambhir is the consummate family-man, enjoying taking daughters Azeen and Anaiza to school—small, vital things he has missed. He looks forward to watching Azeen perform at her tennis and dancing classes, as his mother Seema and wife Natasha are overseeing the house renovation. A satisfying, complacent existence, till the call of the green draws in ‘Gauti’ in a different avatar.

Telangana Election Is Not Only TRS' Victory, But Also Failure Of Opposition