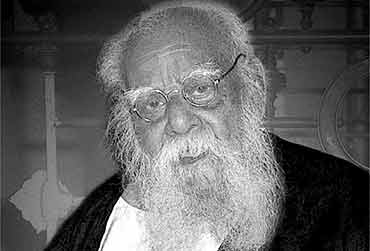 By this yardstick, Tamil Nadu was never the land that Periyar had in mind. It is 125 years since Erode Venkatanaicker Ramasamy (1879-1973) was born into a life that gave him the title Periyar (The Great Man). He crisscrossed the Tamil country spreading a heady message of rationalism, atheism, anti-Brahminism and self-respect for the so-called Shudras. But very little of what he preached has sunk in or inspires any action today. While Bahujan Samaj Party leader Mayawati celebrated the iconoclast with statues and Periyar Melas in UP in the mid-’90s, back in his own state, Periyar seems to have little or no following. Periyar swore by rationalism, and yet the most visible representative of Dravidian self-respect, Muthuvel Karunanidhi, Dravida Munnetra Kazhagam (DMK) president for life, always wears a yellow angavastram whose religious significance remains mired in mystery. Puratchi Thalaivi J. Jayalalitha, another flag-bearer of Dravidian ideology, is more unabashed in her religiosity and has espoused the cause of numerology, adding an ‘a’ to her name. The two leaders will of course ritually garland a Periyar statue this September 17, his birth anniversary.

Tamil Nadu is today steeped in superstitions and irrationalities—every year children are buried alive for a few moments to ward off evil; fire-walking is commonplace; Dalits are still subjected to the worst atrocities imaginable; powerful religious cults like Bangaru Adigalar’s hold sway; men and women give up limbs and lives for political leaders and film stars who are venerated like gods; children, such as 13-year-old Bharanidharan alias ‘Salem Kutty Swami’, posing as gurus, command a better following than Dravidar Kazhagam, the original Dravidian platform founded by Periyar.

But who is, or was, Periyar? Many in India know of Periyar only as a river and sanctuary by that name in Kerala. Says K. Veeramani, general secretary of Dravidar Kazhagam, "There’s a need to spread awareness about Periyar and his ideology." Nobody will dispute him, given that the only definitive edition of his writings and speeches—the three-volume Thoughts of E.V.R. Periyar—was issued once by V. Anaimuthu of Tiruchi Thinkers’ Forum in 1974. This work has never been reprinted. There’s no critical biography of Periyar; good renditions of his work are not available in English. This is unlike the case of Mahatma Jyotiba Phule or Babasaheb B.R. Ambedkar, whose writings have been made available at subsidised prices by the Maharashtra government.

Periyar, born in an affluent business family of Naickers in Erode, studied only up to Class IV, and as a young man left home to tour the nation. He even lived the life of a sanyasi in Benares. Socially active since 1917, he joined the Indian National Congress in 1919 and was a staunch Gandhian—swearing by prohibition and khadi—till what he called Brahmin domination within the Congress led to his founding of the Self-Respect Movement in 1925. In 1938, he headed the Justice Party. Six years later, he converted it into the non-political social outfit Dravidar Kazhagam, whose offshoots—DMK, AIADMK, MDMK—have defined Tamil politics as we know it.

Periyar was an indefatigable public speaker who campaigned on various platforms between 1917 and 1973, extending support to different parties at different times. On an average, he campaigned 220 days of the year. In 1973, at the age of 95, he spoke at 42 public meetings in the three months before his death. The firebrand atheist sought to usher in rationalist humanism by breaking idols of Ganesha (on Buddha Purnima, 1953) and burning portraits of Rama (1956), and with his radical retelling of the Ramayana. Says C. Lakshmanan, Fellow with the Madras Institute of Development Studies, "These gestures did have a short-term impact, but in the final analysis they amounted to mere rhetoric. The fundamental problem is the construction of a non-Brahmin bloc as a monolithic category, jettisoning contradictions between the elite non-Brahmins, the most backward castes (MBC) and Dalits. Periyar was more anti-Brahmin than anti-caste." According to Ravikumar, activist-theoretician of the Dalit movement who has been spearheading a critique of Periyar, "Periyar’s eccentricities seem to have provoked people to turn more zealously to religion. Tamil Nadu produces the largest number of mass circulation magazines devoted to spreading bhakti and astrology."

The Periyar-led movement did open up spaces monopolised by Brahmins—temples and government jobs—to the larger intermediary castes. "However," says Thol. Thirumavalavan, leader of Vidudalai Chiruthaigal (Liberation Panthers), "Periyar had no separate agenda for Dalits. The enthusiasm Periyarites have even today for sanctum entry and in challenging Shankaracharyas is not shown in leading Dalits into temples controlled by non-Brahmins. Periyar’s only success was in displacing Brahmin hegemony. On all other fronts—the battle against superstitions, for equality, atheism, rational humanism—he has failed."

But there are many who argue for the continued relevance of Periyar. Says G. Aloysius, author of Nationalism Without a Nation in India, "When Nehru, E.M.S. Namboodiripad or Jyoti Basu spoke about their atheism, they were celebrated. Whereas when Periyar espoused atheism, the brahminical intelligentsia was not comfortable because his atheism struck at the root of the caste system." Aloysius believes that oppressed groups like Dalits and MBCs might appear to have arrived late on the scene, but they are at least able to stake their claims. "In the southern districts of Tamil Nadu, Dalits retaliate when they are physically attacked. In northern India, this is unthinkable." As Veeramani sees it, "If Tamil Nadu happens to be the only state where 69 per cent reservation is allowed, it is thanks to Periyar. OBC leaders like Uma Bharati and Kalyan Singh are products of the Periyarite legacy even if they do not realise that."

Chandra Bhan Prasad, author of Dalit Diary: Reflections on Apartheid in India, provides a contrary perspective. "In August, I was in Kattukoodalur, a village near Neyveli. Dalits here have to sip their tea standing, even if chairs at the teashop are empty. The local barber would not serve them. In parts of TN, even touching a Dalit is considered polluting. TN proves that the Shudras, when empowered, can be more socially violent than the Brahmins." Prasad contrasts the UP situation: "While 42 per cent Dalits are independent cultivators in UP, in TN it is only 12.8 per cent." There are those who posit Periyar as a useful resource against Hindutva. But Ravikumar finds even this problematic. "Periyar worked solely for the cause of the non-Brahmin, non-Dalit intermediary castes. He deployed the concept of ‘majority’ for this purpose. There’s only one difference between the majoritarianism that the Hindutvawadis propound and that of Periyar’s: that is, over the exclusion of Brahmins from this majority. How else would Dravidian parties so easily ally with Hindutva?"

Today, as his legacy and relevance are debated, E.V.R. Periyar remains a bearded, bespectacled, state-erected statue looking down helplessly at Tamils. Come election time and every Dravidian party features him on their posters. Speaker after speaker finds it convenient to rewind to his sayings. But beyond that, Periyar remains an icon more forgotten than remembered.

The Gates Of Hades Flung Open