FROM boxing to diplomacy to writing his first thriller, 64-year-old Krishnan (Kris) Srinivasan has been there, done that. He talks of life in South Block, bureaucrats, politicians, the IB and other ingredients of his first novel. Excerpts: 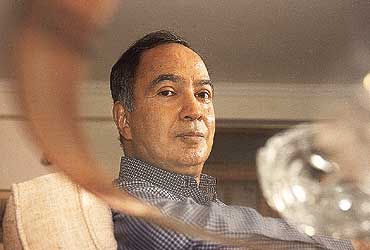 outlookindia.com
-0001-11-30T00:00:00+0553
On the bureaucracy: My colleagues will recognise the situations, not themselves. I took care to merge four or five identities into each character and even changed the time-frame. Thus you'll find a Commonwealth Secretary in the book, a post that has long since been abolished.

On politicians: Yes, politicians do come out better than bureaucrats in my book. That's because I have a great respect for politicians. I think they're a much maligned lot. They have a much harder job than officers, and yet the latter are so quick to criticise them. While the failings of bureaucrats are usually covered up in files and records, the politician is out there in the public glare.

On the IFS: Yes, there is a lot of bumbling about that goes on in every ministry. But man for man, I'd say that our foreign service officials are better than any around the world: they are more productive, work harder for their national interest and are more skilled in specialised negotiations.

On socialism: I suppose you could call me a socialist with a small s. People in high positions forget the reality of India outside the corridors of the ministries. The relationship between the government and the people is still adversial, although it's beginning to change with movements like the Narmada agitation.

On the IB: What I describe in the novel, about one intelligence agency not knowing what the other is doing, is quite true. At least, it used to be so, five or six years ago before I retired and went to the Commonwealth Secretariat in London. Isn't that why the National Security Council was set up?

On a sequel: I'd like to write a sequel, which is why I left the Indian part deliberately hanging. There are several loose ends that I've left to explore in a sequel.

On writing: But of course writing is not a second career, not even a third. It's just that I've always enjoyed reading thrillers, and decided to write a story that's been buzzing around in my head for a while.