'I Met Robert When I Was Just Thirteen'

Q: What do you predict for the Congress in this election? A: 'It's touch and go' 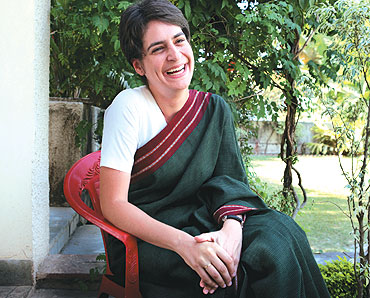 Priyanka Gandhi Vadra speaks to Sheela Reddy in the guest house of the hospital run by the family trust in Munshiganj, Amethi. Excerpts:

Do you think the Congress is going to suffer in this election because of going it alone?

I don't think it will suffer. Because going with the Samajwadi Party or any other party in any case was not going to be a good thing for the Congress. It would benefit the other parties more than it would the Congress, either in Bihar or UP. So either way, even going it alone is not going to create huge benefits right now. It's a long-term process. But it's not as if it's going to be a worse loss than it would have been if Congress was with the SP and others.

What is your prediction for the Congress this election?

I think this election is very touch and go. Touch and go, in the sense that it is going to be a close call. We just have to wait and see. It's one of those rare elections when nobody really knows or has a feel for what the results will be.

And why is that-is it because of the delimitation of constituencies?

No, I don't think it's because the constituencies have changed. I really can't say why. During the last elections, there was the mood that the BJP was going to come back into power. But let me tell you that the only one who had the numbers exact was my brother. All the rest of us thought we were not going to do well, but he was very clear right from the beginning, and he had all the numbers and papers lined up and they were actually pretty accurate. I think this election it's really difficult to say.

Are you the prime mover of the politics of your family?

That is not true at all. In the beginning, yes, I did advise my mother.

And your brother as well?

No, my brother is far more astute politically than I am. And his understanding of social and economic issues is way above mine. And he has a very strategic mind. A very clear vision of the direction in which he wants to move. I am his sister so this may sound like sisterly fondness, but Rahul is a very sophisticated thinker; he has a brilliant mind. He is quiet, so you don't get to know about it, but sooner or later I think people will see that.

Doesn't the Congress need both his skills and yours?

I don't understand the word 'need'. The Congress has a strong leadership-it has my mother, it has Manmohan Singhji-he is very strong in his own way: morally very strong. It has many other leaders at the second level, one of whom is my brother.

You have to be really young and healthy to campaign in your style-19 meetings in one day! Do you think that's why we need younger politicians in the fray?

I think it's a very old style of campaigning. My grandmother and father campaigned in this way. My grandmother did it when there was no question of going here and there in airplanes and helicopters.

But this was when it wasn't the norm to use helicopters, which are now a status symbol. You, on the other hand, seem to be going out of your way to be seen as approachable.

Because that's what I believe. My ideal is that every single Indian should feel empowered to be able to change this country.

Is that what you were doing when you were campaigning yesterday, by repeatedly projecting politicians, including your mother, as merely public servants to carry out people's will? Do you think this is the politics of the future?

Yes. I am actually inspired by what my brother is doing, which is a more sophisticated version of what I am saying. I am only going to the people and saying this, but my brother is actually translating it into something that can be used in the (Congress) organisation. What he's trying to do in the Youth Congress is going unnoticed, but will actually revolutionise politics. First, by bringing honest, young, fresh people into politics, giving them an opportunity to come in without knowing somebody, and without being someone's son or daughter. And secondly, by empowering them by actually holding elections in the frontal organisations. I feel this is really the way forward. Because in India, our society is so hierarchical, we have a tendency to be too reverential.

In one of the meetings, for example, a lady came forward and said to me: Aap bhagwan ho, hum aapke bhakt hain-you are god, we are your devotees. This attitude is okay if you're a real bhagwan but not okay for someone who is supposed to resolve your problems. You are supposed to be the entitled one, but what I see all around is that the people who have the power are the entitled ones and the ones who have given them power are forgotten. So the result is we are complaining and dissatisfied, but we don't really feel that we can make a change. Like the urban voter, who doesn't go out and vote as much as the rural one. The rural voter still has very concrete issues like water and electricity that still motivate him to go and vote because he relates them to whoever will come to power. But in the case of the urban voter, there is a sense of dissatisfaction, everyone is tired and complaining, which is fine, we all have the right to do so. But it should not become a habit that when you actually have the power to change things, you think you don't matter enough, that you don't even go and cast your vote. It is that sense of entitlement and empowerment that I am trying for. Rahul is actually doing it, I am articulating it. You keep repeating that you will not join politics, but as far as we can see, you are already in politics and are a consummate politician at that. What exactly is your concept of politics?

When people ask me about joining politics, they are asking me why I am not standing for elections or getting more involved. But when I'm not here in Amethi-and I'm here only during election campaigns-I go to Khan Market to buy my groceries, look after my kids, make them cupcakes. That's what I do. I am not involved in the political process. When my help is required by my brother or mother now and then for something or other, then they always do ask me (for help), and I do.

Are you involved in some projects here in Amethi and Rae Bareli?

I was involved at the time I was looking after my mother's constituency. But no longer-I've completely backed off from all those things. I pretty much lead a normal, quiet life. I am actually not in politics in fact.

Does it mean that you can't have a normal, quiet life if you are in politics?

I don't think I would be able to.

Why does politics have to be an either/or thing for you?

It's not really an either/or thing. It's got to be what drives you from within. And as comfortable as I look in the situation, and as naturally as it comes to me, there is also a side of me that makes me extremely uncomfortable making this the choice for the rest of my life. It is simply not the quality of life I want to lead.

But isn't that confusing, when you're already in politics?

No, that is why I draw my lines very clearly: that is why I am here in Amethi and Rae Bareli only during the campaign, and I refuse all public engagements, even prize-giving and all that kind of thing.

Why did you make such a severe decision-almost a renunciation?

But won't much be made of you anyway, whether you come to the constituency or not? You will always be a factor, won't you?

Yes, but how I use that being a factor-whether I use it to create a big political movement, whether I use it to go forward myself in politics, or use it as a means of understanding my own life-that is my choice. The extent to which I am in politics is my choice. I cannot remove the fact that I am born into a political family. Nor can I remove the fact that there are members of my family involved in politics, and therefore there may be certain things that I'm involved in.

For example, they're not available to campaign here, and I can do this job for them. So I do it for them. I'm happy with the small-that's what people don't understand. Because they see this huge opportunity and huge possibility, they don't understand why politics isn't drawing me.