'I kept My Word, Rajiv Didn't' 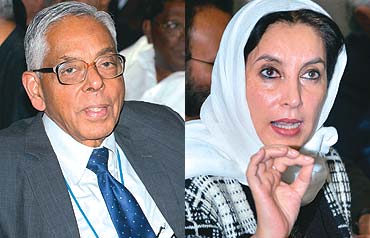 She is known for her charm, and for her instinctive and deft ability to handle the international media. Yet ex-PM Benazir Bhutto, at the other end of a telephone line from Quetta last week, couldn't keep the steel from her voice. "Did you see the interview given by Mr Narayanan," asked a clearly rattled Benazir. "Does India really believe I am not a friend? I thought India regarded me as a factor for peace, as a factor for India-Pakistan stability."

The interview in question was the one National Security Advisor M.K. Narayanan gave to Karan Thapar on a TV news channel. When asked if Benazir would live up to her promises (on handing over terrorists), Narayanan said, "Her track record is not necessarily something which will make us believe that she would follow to the letter of what she has said—I think even if she wishes to do so."

A testy Benazir, calling after a tough day's campaigning in the Balochistan capital Quetta was polite, but would brook no questions. During her call within minutes of the transcript of the interview being broadcast by news agencies she said, "I have visited India three times in the recent past and always felt I was considered a great friend of India's. I am very, very surprised and extremely hurt to hear it said otherwise."

There was simply no question of getting an assessment of the election campaign, of the rigging she alleges is under way to steal the January 8 election. Instead, I was at the receiving end of a completely unexpected 20-minute outburst where she took exception to Narayanan's scepticism of her bona fides. Particularly stinging was his comment: "One has to go by what she did in the nineties. One is always a little sceptical." That he qualified it by saying, "The single most important entity in Pakistan remains the army, along with the isi. I find it extremely difficult to believe that the prime minister Benazir Bhutto, if she becomes that, will have a free hand in doing all the things that she wishes to do."

Clearly, what unnerved her most was the mention of her one-on-one talks with then prime minister Rajiv Gandhi and the suggestion she did not keep up her side of the bargain. Narayanan, a former head of Intelligence Bureau who was Joint Intelligence Chief at the time, said, "I know that in 1988 when she met Prime Minister Rajiv Gandhi she made a number of promises. We know almost certainly that she was sort of curbed by the military at that point but whether she will have success now is difficult to believe and it would be very optimistic to expect that she can fulfil whatever she says but we hope that she will do her best."

Benazir has a completely different take on the talks. "If anyone kept their word, it was me. Not Rajiv. He went back to India and then called me on his way to the Commonwealth to say that he could not keep his promise to withdraw from Siachen and that he would do it only after the elections. Now, if I haven't raised the subject or complained all these many years, why is it being raised now?"

She then alluded to a chapter in her prime ministership that has always been hinted at but never acknowledged—her rumoured assistance to India to bring the Pakistan army and isi-inspired Sikh insurgency to an end. "Does anyone remember those times or is public memory so short that no one recalls the extremely difficult conditions India faced during the Sikh insurgency 20 years ago? India was in a complete mess. Does anyone remember that it was I who kept my promise to Prime Minister Rajiv Gandhi when we met and he appealed to me for help in tackling the Sikhs? Has India forgotten December 1988? Have they forgotten the results of that meeting and how I helped curb the Sikh militancy?" Benazir reportedly handed over a dossier of names containing the covert identities of Pakistan's agents who were masterminding the insurgency, which helped Delhi track down the terrorists and completely destroy the Pakistan army sponsored militant infrastructure.

Continuing her harangue, she said, "Nobody else knew what Rajiv and I discussed. There was no fly on the wall. How can anyone say I have not kept my promises to him when the single biggest result of that meeting was the end of the Sikh insurgency? It was Rajiv who committed to me that he would withdraw from Siachen. I made no promises that could have been broken." She said after the former prime minister was assassinated she tried but could never establish the same kind of rapport with the government that followed. But despite the slight chill, there was no war with India when she was prime minister, she added. "Not only was there no war, in fact there was peace because I nixed the idea of Kargil. Has India forgotten all of this? When I was prime minister you did not have the Mumbai bomb blasts, you did not have the attack on Parliament. There was no Kargil."

What about militancy in Kashmir, which began under her watch by a fuming army angry over the way she upset their plans for the Sikh insurgency? "I made no promises on Kashmir because there were no discussions on Kashmir. There were no promises made, none made that I could have broken." She went on to ask, "Why does India believe I will break my word, imply I cannot be trusted?" Benazir then added, "I believe we share so much—a belief in democratic values, in democracy and human rights. I am very disappointed to hear that Delhi does not think so."

What made Narayanan speak out against Benazir? Sources in Delhi feel Narayanan may have been sending a warning that India will not countenance a resurrection of the Kashmiri jehad once power in Pakistan passes from military to a weak civilian ruler susceptible to pressure from the army. By all accounts that message has been heard loud and clear. Whether it will be heeded is another matter.