Home  »  Magazine  »  International  » Interviews  » conversation »  'I Bet Many Times India Would Take Off. It Has'

'I Bet Many Times India Would Take Off. It Has'

The Italian PM pinpoints where India and Italy can come together and marry the expertise of naturally entrepreneurial peoples. 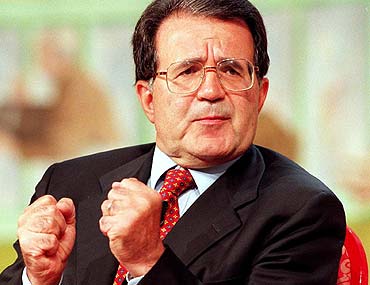 outlookindia.com
-0001-11-30T00:00:00+0553
Italy's prime minister Romano Prodi, a former professor and author of several books, knows India better than many European leaders. He draws on historical links, going back to Mazzini and Garibaldi who inspired Mahatma Gandhi and Jawaharlal Nehru during the freedom struggle. As an economist, Prodi bet on India taking off "many times" and today he can redeem his faith. Sitting in his imposing 16th century office in Palazzo Chigi in the old centre of Rome around the Marcus Aurelius column, Prodi can pinpoint with academic precision where India and Italy can come together and marry the expertise of naturally entrepreneurial peoples. Excerpts from an interview with Seema Sirohi:


What comes to mind when you hear the name 'India'?

India brings to mind a sincere and trusted friend, a vibrant nation, with strong democratic credentials and growing financial and industrial clout. India has been making rapid strides on the international scene and is a world leader in cutting-edge fields such as IT and BPO, thanks to its world-class institutions of higher learning. India is an emerging economic giant. But at the same time I am reminded of an ancient civilisation, a priceless heritage, a beautiful environment and, more than anything else, a set of shared values.

What kind of civilisational links do India and Italy share?

It is not by accident that our two civilisations have the oldest texts revered for their high spiritual content, the Bible and the Vedas. Our paths may have been different but our roots are common; and it shows. Italy was unified in the 19th century through the 'Risorgimento' at a time when the struggle for Indian independence was taking hold. The writings of the Risorgimento leaders—Mazzini, Garibaldi, Cavour—provided inspiration for Mahatma Gandhi and other leaders of the Indian independence movement. Each in their own way had the same aim—of restoring unity to divided nations and promoting the ideals of human dignity, equality and freedom. And, of course, not only Tagore, but Gandhi and Nehru have been indispensable reading not only for me but for many Italians through the generations.

What lessons can Europe draw from India's democratic experiment?

India's democracy has been an unqualified success. It was not only Churchill who doubted independent India's ability to survive as a unitary state, but the pessimism of those comments stands on its head. It was through democracy that India upheld the Gandhian ideals of an inclusive, secular society. India is a multi-ethnic and multi-religious state and so, increasingly, is Europe. We can learn from each other's experience but one thing should be clear to us all—democracy can only flourish if it is accompanied by tolerance and a deep understanding of the problems of all, especially of the minorities and the disadvantaged.

In modern times Italy came into Indian mass consciousness with Sonia Gandhi. What do you think of a beautiful girl from Orbassano reaching the top of India's political structure?

I believe our friendship goes back much further, to the very origins of the drive for an independent India. And how can you forget the significant contribution Italy made throughout the '50s and '60s in developing India's agricultural and industrial potential? The relationship has constantly grown. Mrs Gandhi has acquired the trust and admiration of the Indian people through her actions and is highly respected among world leaders. She was born in Italy and today she is an Indian citizen. She is not an isolated case—many leading personalities around the world, ministers as well as heads of state, were born in Italy. They are contributing to the progress of their countries with dedication. The Indian people have decided through their democratic process what role should be played by Mrs Sonia Gandhi, one of your country's most distinguished citizens. 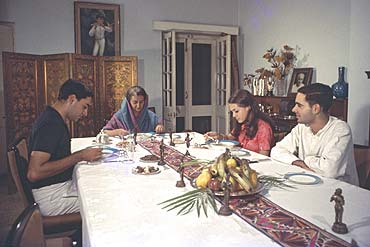 Indira Gandhi dines with her sons and Sonia at her 1, Safdarjung Rd residence

You are expected to visit India in February 2007. What is on your agenda?

India is an enormous resource and I bet many times that India would take off and India did. Now India is one of the protagonists of the new economy and new international policy. Not only Italy but Europe as a whole must consider completely new relations with India. But there is room for unique cooperation between India and Italy. I found the Tata-Fiat agreement was simply whisky and soda—the right combination. India, more than Italy, has a mathematical-software culture. We have no Bangalore in Italy. But we put together excellent, small manufacturing industries. We are unable to do the same thing with software and services of this type. All these characteristics make India and Italy potentially complementary and I want to exploit this. I know that India will now focus on new agricultural policy. Going downstream in the food industry—we have an absolutely unique case in Italy. We are the biggest producers of food processing machinery in the world. The cold chain and the elementary processing chain can double the quantity of food without increasing production.

Another area where India could do with Italian help is soccer.

(Laughs) We could do that. We could build some cooperation.

What has prompted the West's awakening to India in recent years?

India has grown considerably during the last years and the world has acknowledged it. This holds true not only from an economic point of view. India, as a democratic country with whom we share values of tolerance and rule of law, is now prepared to take up new and wider responsibilities. We also should not underestimate the importance of people-to-people contacts, as more Indian tourists travel and the Indian diaspora plays an increasingly pivotal role in the West.

Europe seems to be trying to catch up to the US lead in opening up to India with a historic civilian nuclear agreement signed last year. Why is Europe following rather than leading on the world stage?

The US and the EU enjoy a well-structured trans-Atlantic relationship which is a key factor in world stability. In certain cases, maybe the US takes the lead, in others, the EU. As far as the civil nuclear deal is concerned, it is the international community that must take a decision, as the Indo-US agreement wouldn't be fully effective without the deliberations of the Nuclear Suppliers' Group. India and the US are well aware of this.

Will Italy support the Indo-US nuclear deal within the NSG?

India has conducted nuclear activities while remaining a non-signatory to the NPT, and any steps designed to bring it fully into the international non-proliferation regime should be viewed positively; even more so by Italy which attaches special importance to the NPT. We will work constructively in the NSG, together with the US, the EU and other partners. Safe development of nuclear energy to address growing energy needs in India and the associated priority of effective safeguards are issues which cannot be restricted to any given country or to specific bilateral formats. My government will work for the collective needs of the international community.

Do you see the rise of India as a stabilising factor vis-a-vis China?

Many see India as a crucial balance to China's emergence as a global economic and military power. India is surely emerging as a key actor in the region, while devising its own strategy as a global player. It has established a strategic partnership with China, and we are witnessing spectacular growth in trade between the two countries. In the long term, looking at "India vs China" as geopolitically balancing factors could prove to be a mistake. We should start looking at India AND China instead.

What are the advantages and disadvantages India has over China?

China has a high literacy rate, inexpensive trained manpower, a much higher savings and investment rate than India's. India, by contrast, has a stable political system, sophisticated financial institutions, a younger population, fluency in English, an independent judiciary and an established business culture. On the whole, I believe that India's apparent shortcomings could become its strengths in the future. India's decision-making may not match China's ability to mobilise resources in strategic sectors or build infrastructure in a short time, but in the medium and long term India is probably best attuned to ensure social stability and sustainable growth.

Is Europe afraid of China? Do you see India as an alternate basket to put the eggs in?

China and India have over the recent years shown similar patterns in growth rates and comparative advantage. China, however, with its high productivity supported by exceptional growth rates, has caused a major reorientation in trade, which has alarmed European manufacturers and encouraged the temptation of protectionism. India, with its less export-oriented strategy, its high-skilled manpower, its focus on quality, and its easier-to-deal-with approach to the rest of the world, is seen more as an opportunity than a threat compared to China.

What is Italy's view on a permanent seat for India in the UN Security Council?

We may agree on the substantive aims and believe that in order to achieve them, different avenues can be pursued. We are not against the candidature of any state; not of Germany, not of India, nor anyone else. 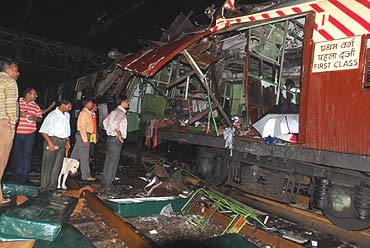 On terror: ‘Civilisations too precious to be left at the mercy of thugs’

India has been a victim of terrorism since the 1980s—most of it perpetrated by Pakistan-based terrorists. But it is only after 9/11 that the West realised the implications of India's warnings....

Terrorism is a scourge for all humanity and India has suffered greatly. The world grieved at the tragedy of the Mumbai blasts and the G-8 countries reiterated in St Petersburg their commitment to fight terrorism. The 9/11 attacks made the world painfully aware that terrorism had crossed a new, extremely dangerous barrier—it is no longer tied to territorial or socio-economic determinants, but increasingly to transnational fundamentalist ideologies. India and Europe must fight terrorism together, because we are all victims and protagonists here. We must never let our attention levels slip. Our civilisations are far too precious to be left at the mercy of mindless thugs.