The BJP's triumphant CM, Manohar Parrikar, spoke to Outlook on the agenda he has set out for himself and the impact of the Gujarat violence on the elections in Goa. Excerpts: 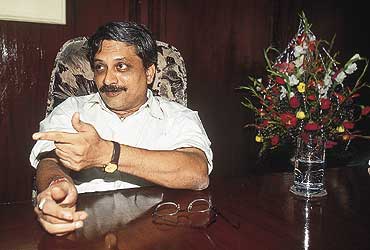 outlookindia.com
-0001-11-30T00:00:00+0553
What accounts for your success in the elections?
People say we won by default. But I believe that we won because of the good governance we provided.

The BJP was insignificant in Goa till recently. Is there any change in the outlook of society here?
I think there is a soft polarisation. And it's natural for the majority community to view me as someone who will understand their problems.

Are you are an RSS man or a chief minister first?
Why can't one be both? I am a staunch RSS man and that's why I'm not communal. What I have learnt from the RSS is to maintain justice. The RSS never taught me to be communal.

There is this accusation that you recruited RSS men in the police force...
This is all loose talk. There were 1,800 applications for constables and other posts in the police force. As many as 1,100 were chosen purely by merit. The Christian youth in Goa is not interested in the constabulary. So it may appear as though it is majority community-dominated. That doesn't mean I have saffronised the police force.

You are charged with giving away about 20 schools to trusts floated by the RSS.
Why 20? There are 69 more. These schools have no students. These are just buildings and benches. I offer to give this infrastructure away to anybody who is interested, including the Church. If the RSS has come forward, what's wrong with that?

There is a fear among Christians in Goa about the BJP. What assurance can you give them?
Catholics were among those who voted for us. That means they have faith in us.

A Beachhead, but the Hinterland is Another Battle