'Hyphenation Seems To Reside In India'

Excerpts from US ambassador to India Robert D. Blackwill's interview with V. Sudarshan. 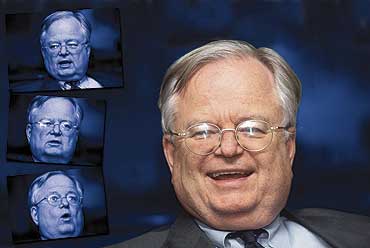 outlookindia.com
-0001-11-30T00:00:00+0553
When Outlook met workaholic US ambassador to India Robert D. Blackwill on Monday afternoon, western classical music played in the background. He asked us if it bothered us and we said, if he didn't mind, could we have some tenor saxophone on instead? Though he couldn't locate the tenor men we wanted, Blackwill did speak candidly on the new strategic agenda between India and the US. :

As American ambassador in India, what are the challenges you have been faced with post-September 11?
September 11 changed the world in the orientation that major powers have with one another. It brought India and the US closer together in a joint fight against terrorism. There's not the slightest doubt that it accelerated cooperation between the two countries as reflected in President Bush's talk about 'transforming the relationship' and the prime minister's use of the phrase 'natural allies'. So, conceptually, you've had an enormous change in the relationship since September 11. The biggest challenge now is in working with the Indian government to implement these conceptual changes. I carry in my pocket this card (fishes it out) which has on it the eight areas that the President and the PM directed their ministers to focus on: counter-terrorism, the war against terrorism, defence cooperation, diplomatic discussions and cooperation on Afghanistan, discussion and cooperation on the President's new strategic framework— basically the future of international efforts to slow or stop the spread of weapons of mass destruction—and space, civil nuclear, economic and intelligence cooperation. The challenge is to turn this extraordinarily large and strategic agenda—notice its global character—and turn it into concrete advances in the bilateral relationship.

Does the US president intend to visit India next year?
Certainly, he intends to come. But we don't have a date yet.

Will it be a hyphenated visit (will he combine a visit to both India and Pakistan)?
Hyphenation seems to reside mostly in India. When I want to talk about the US-India relationship, most of the Indian press wants to talk about either Pakistan or Kashmir, which I regard as hyphenating the relationship. Where I come from, we are not hyphenators. I hope as time passes, the Indian media will be more interested in the strategic agenda I just described, while remaining naturally interested in US-Pakistan relations. The Indian media and others are very intent that the US does not become an intermediary in the Kashmir issue and we have no intention of doing so. But here's the paradox: even though India does not wish the US to become active, I repeatedly get asked about Kashmir by the Indian media.

Is this response limited just to the Indian media?
No, it would be better if I said the elite, including the media. It's hard for me sometimes to get a conversation going and sustain it without being asked about Pakistan.

But there seems to be some justifiable ground for hyphenation. For example, the early indications that sanctions were going to be lifted came between April-June but it didn't happen till after September 11, when sanctions against Pakistan went too.
Well, the two countries are next-door neighbours and are very preoccupied with one another. So I can't say that they don't ever come up in the same conversation. What I can tell you is that when we were preparing for the summit meeting between the President and the PM and were working on the strategic agenda I just described, no third party, no third country ever came up.Never.

In the US, there is a debate on how to carry forward the campaign on terrorism. Sudan, Iraq etc, have been mentioned but not Pakistan. Is there no concern about Pakistan?
Nobody in Washington is going on record about the next stage of our war against terrorism. This is because we don't want to alert terrorists about where we are going next and the way we might be going next. The US President has made it clear that he is concerned about terrorism everywhere. There are no exceptions to that; he's concerned about every state that supports terrorism. So there are going to be no exceptions to that.

US defence secretary Donald Rumsfeld was asked whether there were instances of the US-led alliance pursuing suspected Al Qaeda terrorists across into Pakistan, and he said "not yet".
I will leave Don Rumsfeld's comments to Don Rumsfeld.

We see Taliban fighters from other countries, like Pakistan, walking away, especially from Kunduz. They aren't being interdicted or eliminated. Isn't that a wrong precedent?
Our policy is these foreign fighters should be caught and interdicted. But we don't ourselves have the means to carry it out on every foot of ground in Afghanistan.

The US has gone beyond the status quo ante on sanctions prevailing since May 1998. It has gone from an automatic presumption of denial on dual-use and high-technology items to a review on a case-by-case basis...
...With a presumption of approval.

How soon will you put in place a fast-track mechanism for transfer of dual-use and high-end technology?
The summit was only two weeks ago. But we want to stimulate and accelerate those changes. It will happen. We are still talking about the best way to do it.

American analysts are taking the line that "we cannot build up India because it is against Pakistan". Is that the official line?
That's not official.

Are there any inhibitors in full-blooded defence cooperation with India?
No. Full-blooded is the way to put it. We, and I believe this is shared by Indians too, intend to develop this defence relationship in a very robust way over time in the long-term as we think it serves our interests.

Would it be possible for India and the US to straight away jump into active cooperation on specific operations without putting in place a step-by-step build-up to that stage?
A joint operation?

Yes.
The tremendously generous offers by the Indian side after September 11 has been overtaken by the Taliban's collapse. But we don't need a formal structure to cooperate. If we have an idea about military-to-military cooperation, we will express it to the Indian government. That's undoubtedly going to happen in the next few weeks, when we have major (defence) visitors coming from the US. Both governments believe it is in their long-term interests to have a comprehensive defence relationship. It will happen. Joint exercises, training, arms sales, military exchanges—all the dimensions that come with very close defence cooperation between the US and a close partner.

When is the Lashkar-e-Toiba going to be placed on the Foreign Terrorist Organisation list?
With respect to more additions to that list, I will just say, 'watch this space'. It'll happen. I won't say when...but you won't have to wait till you have grandchildren.

So Far, So Good