Hydra In The Head

Cases of brain cysts, caused by tapeworm, are rising sharply in cities across India 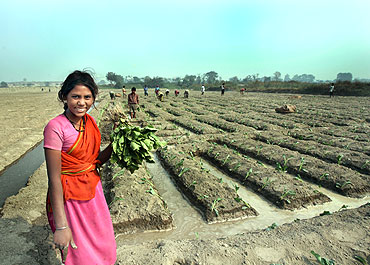 A strange affliction felled Leander Paes in 2003. Partnering Martina Navratilova, he had just won the mixed doubles title at the Australian Open and Wimbledon and was gunning for a Grand Slam. On court during the Cincinnati Masters, Paes began to black out. He became dizzy and was treated at the courtside. But when violent headaches set in, he was hospitalised. A four-millimeter cyst was detected in his brain.

In the breathless stream of news following Leander's condition, there was a pause before the name of his infection was announced: neurocysticercosis. It was an infection of the brain by the tapeworm Taenia Solium. Cysticercosis occurs when tapeworm eggs, instead of passing into the intestines, penetrate through the stomach lining and enter the bloodstream. The eggs grow into cysts in any tissue in the body, including the brain. Eventually, the cysts rupture and the brain tissue becomes inflamed, causing neural disorder: pain, blackouts and epileptic seizures.

Common misunderstandings about the infection—its automatic association with eating pork, with poor food and public hygiene, with epilepsy and mental health—have stifled awareness of a disease that is reaching epidemic proportions in urban India. And it doesn't help that those afflicted by it are reluctant to talk. 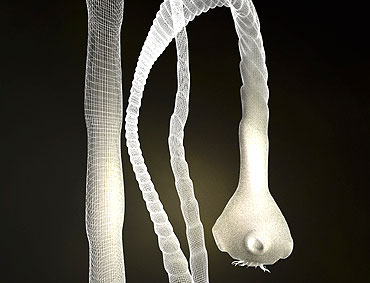 T. Solium is referred to, even in Indian medical journals, as the "pork tapeworm". In this form of the disease, the eggs enter the human body through infected food. In their normal life-cycle, they lodge in the intestines, where they grow into adult tapeworms and reproduce, and release new eggs and body-segments in the faeces. The cycle is completed when pigs, bred in unsanitary conditions, ingest human faeces, and humans eat the pork without cooking it thoroughly enough to kill the tapeworm eggs.

But a much more common source of T. Solium infestation doesn't involve pork. "In fact, pork has nothing to do with it—that is a myth," says Dr G.K. Ahuja, a neurologist at Delhi's Sitaram Bhartia Hospital, "Cysts in the brain are almost always from contaminated vegetables and water." As water sources across the country become faecally contaminated, vegetables grown on riverbanks or on the outskirts of cities are—to put it simply—often grown in human sewage. Vegetables brought in from the countryside are washed in contaminated water before they are presented at the mandi.

Colonel Hemant Chaturvedi, an army doctor, observes that in the last fifteen years, he has seen a five-fold increase in neurocysticercosis cases—"and the overwhelming majority are vegetarians". One was his own wife. "He would insist the children and I never eat any raw vegetables outside the home," Priya says, "What we did eat in the way of salad was washed in potassium permanganate. So it was quite a shock when I got it myself. " She had been feeling a tingling numbness in her arm and fingers, which interfered with her work as a piano teacher in Dehra Dun. It was diagnosed as spondylitis. A month later, riding in her car, she had an epileptic convulsion, blacked out and awoke in hospital. Her mri showed multiple lesions on both sides of her brain. Today, she is in the middle of a five-year drug regime, which includes steroids and anti-epileptics, and weary side-effects.

In Delhi, Deb Mukharji, a former ambassador to Bangladesh and Nepal, has a similar story to tell. During a morning walk, he felt dizzy and then fell unconscious on the road. Tests in hospital led to a diagnosis of neurocysticercosis, and he is now under similar treatment.

A dull, insistent headache led Anjana Banerjee, a teacher in Bangalore, to the doctor, and a CT-scan showed two inflammations on the brain. "I told the doctor, I can't remember when I last ate pork—but I do eat a lot of vegetables," she says. "He told me it was increasing among vegetarians. Even though I made my salads at home and never ate raw cut vegetables outside the house, not even at five-star hotels." Her treatment, as for most neurocysticercosis patients, was lengthy and difficult.

Stories like these make it clear that neurocysticercosis is no longer a disease confined to slums—the urban elite are equally at risk. In India, more than 70 per cent of disease is water-borne or water-related, but by and large, the urban rich can still insulate themselves from contamination by boiling, filtering or buying barrels of Bisleri. neurocysticercosis is a different story. Clinging to the leaves of innocuous and nutritious green vegetables, there is no sure way to avoid T. Solium.

Rural-urban migration brings seeder cases into the cities, where the total failure of sewage treatment keeps the tapeworms in circulation. Rivers and surface water are more polluted everyday: the faecal contamination of the Yamuna, for example, as it passes through Delhi, is 1,00,000 times the level that would make it safe for just bathing. Vegetables irrigated with this water are infested with T. Solium eggs and even multiple washing does not necessarily dislodge them. The disease spreads as the cycle continues.

A cloud of stigmas and misunderstandings hangs over neurocysticercosis, keeping people from talking about it or realising how widespread it has become. "There are stigmas attached to people with epilepsy," says Dr Shripad Patil, a neuromicrobiologist at Bangalore's NIMHANS. Not to mention the stigma attached to pork. "Sometimes I see a five-star Brahmin family—pure vegetarians, etc, and the girl has an infection," says

Dr Ahuja with a smile, "It causes much embarrassment in the family. They assume she's been eating pork with a boyfriend in a hotel." Priya knows this from her own experience. "Sometimes people ask, with thinly veiled distaste, whether I ate a lot of pork," she says, "As though saying, she's a rampant pork eater who got what she deserved." That didn't deter her from talking about it, though, and she discovered "a surprising number of fellow sufferers—it seemed like everyone I met knew someone who was being treated for neurocysticercosis."

Rigorous care in the kitchen will greatly reduce the risk of infection, but a sprinkling of green coriander or shredded cabbage mixed into a chowmein, can be hard to avoid. After his illness, Deb concluded that "with the unhygienic condition of the cities we live in, it is impossible to have 100 per cent prophylaxis." The most effective public health remedy is to fix how our cities deal with waste. By then, the pork tapeworm will have been popularly renamed as the salad tapeworm or the sabzi tapeworm. It will be everybody's problem.

In Moves The Shaker