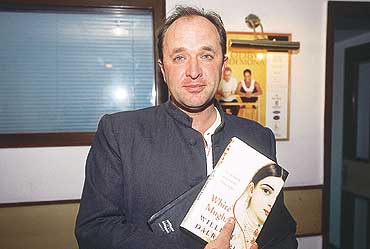 White Mughals—Love And Betrayal In Eighteenth Century India
By William Dalrymple
Viking Rs 650; Page: 580
The Deccan plateau’s monumental grandeur is the proper setting for Dalrymple’s cliff-hanging historical thriller, a book profoundly faithful to the poignancy of love briefly consummated amidst conflicting cultures. The pulsating true chronicle of a British resident’s tempestuous romance with a Muslim aristocrat’s teenage daughter in Hyderabad 200 years ago is the result of diligent amateur research, presented with Dalrymple’s trademark wit and penned in a stylishly expository manner. He has the advantage of sharing the tragic hero Kirkpatrick’s Scot background and uses family archives to chart the resident’s perilous course. Superbly structured, each chapter ends on a note of suspense. And instead of the seemingly inevitable doomed ending, there is an unlikely reprieve when the exiled daughter of Kirkpatrick and Khair un-Nissa is able to contact her Shushtari cousins in Hyderabad.

A surprising late entrant to the story is another Lowland Scot—the usually crusty Thomas Carlyle. Thanks to the palpable beauty of Khair’s daughter, even ‘Oor Tam’ waxes romantic and, with his accustomed omniscience, insists on referring to this Shia Sayyid as a ‘Hindu princess’. While the author finds it easy to explore the mind of Kirkpatrick, about the motives of Khair un-Nissa he is obviously less certain. Why did she declare her love and choose the unthinkable option of miscegenation? Obviously, her mother must have supported this daring decision and it is encouraging to hear this matron declare that men and women should love each other untrammelled by the ‘distinctions’ of religion. All religions teach oneness but none have the courage to uphold it. This is really the point the book is trying to make and Dalrymple is passionate enough about the subject to sound convincing. The author mentions how the doctrinally free air of the Deccan gave rise to some remarkable self-possessed women like Chand Bibi and Dilshad Agha. Khair Begum deserves a gender study if only to assuage the heartbreak of double-crossing males, in her case her short-lived husband’s trusted assistant.

Dalrymple’s talents run to scholarly ease with his sources, plus an uncharacteristic academic tenacity to follow up his hunches. Perhaps the saddest revelation in the whole book is how sloppy Delhi’s National Archives are with their Islamic manuscript treasures. (Unless this is a sign of subliminal saffronism? The Deccan is a field where books by only foreign and Muslim scholars are to be found.) White Mughals has enough footnotes to make a foot-fetishist’s day and this book should prove enlightening for the simplifying school of history with its myth of big bad colonial armies performing to a sinister gameplan.

Wellesley, the Governor-General who introduced the doctrine of paramountcy, was a loose cannon in the East India Company whom the directors dumped when his expansionist policy threatened to bankrupt the Company. Wellesley was a Francophobe who extended the theatre of war from Europe to the lands of Tipu and the Marathas. It sounds incredible that when the Nizam fought the forces of Nana Phadnavis, ranged against each other were not just the flags of orthodox Hindus and unorthodox Muslims but those of warring French parties, Bourbon and Revolutionary.

The free air of the Deccan encouraged this promiscuous eclecticism and 200 years before bin Laden, Muslim clerics in Hyderabad were blaming Americans for the moral downslide of the world. Small wonder in these meetings and minglings that many experiments went astray and were visited with cruel twists and gut-wrenching hammer blows of fate, none more so than Kirkpatrick’s and Khair un-Nissa’s affair which gives the book its powerful impact. The plot is offset by the regional politics of the Deccan and whether it is war, sex, intrigue or astrology, Dalrymple is a sound and willing guide.

He delights in exploring abstruse aspects of social history and who would have thought that in ‘Hindu Stuart’s’ mausoleum in Calcutta lie the ashes of the man who gave Bollywood its turn-on theme for ladies in wet drapery to quicken the blood of an old Company-general like him and keep, as he puts it, "the bridal torch forever in a blaze". (For dousing the same, Dalrymple quotes the bizarre use of tar as a contraceptive and notes, "If applied hot, one presumes it would make a very effective contraceptive indeed!") Apart from the riveting story, the author’s prose is evocative of the expansive mood engendered both by the plateau country and India’s seductive siddhi to captivate her captors. This is a classic work on a heroic theme that also rescues one of India’s most noble but least regarded landscapes from shameful neglect.

The War Of The Surfs