Laloo and Mulayam, still the vanguard against the ‘communal forces’ 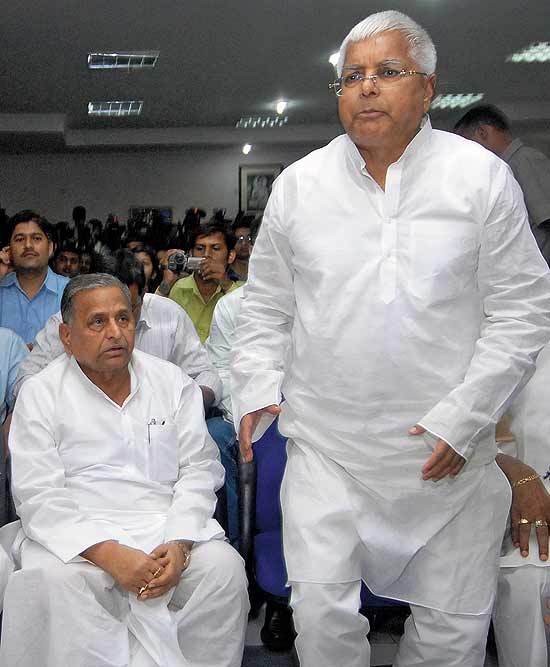 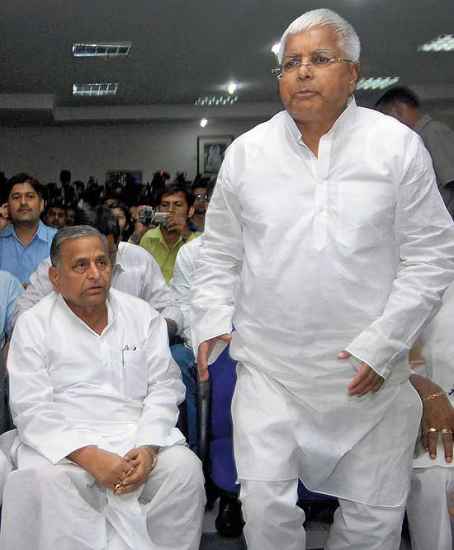 The high point of Laloo Yadav’s political career was stopping the Ram rath yatra of L.K. Advani in 1990 and having the BJP leader arrested. The most decisive act of Mulayam Singh Yadav’s career was ordering the firing on karsevaks headed to the Babri Masjid in Ayodhya the same year. Almost a quarter century later, it is still the two Yadavs of the heartland who are emerging as the main force against the BJP in their respective heartland states.

When this election began, it was presumed that in the two core states of Uttar Pradesh and Bihar, it would be Mayawati and Nitish Kumar who would give the fight-back to the BJP. The Yadavs were seen as largely discred­i­ted figures. But lo and behold, what’s eme­rging is very different from what the pundits predicted. It is to some extent a replay of the politics of the ’90s, an era ref­erred to as Mandal vs Mandir. The issue now is not Ram mandir but Narendra Modi, but it is the two Yadavs who are leading the charge.

Laloo is now a convicted man and cannot stand for elections himself, so wife Rabri Devi and daughter Misa are doing so. But the RJD chief is campaigning relentlessly and with his Yadav vote all charged up, in many seats Muslims see him as a better option to defeat the BJP than the JD(U). The result: Nitish is falling off the grid in some seats. But a consolation for the Bihar CM could be that many minority voters say that in an assembly poll they may still choose Nitish...but for the Lok Sabha Laloo is a better bet. Still, it’s bad news for the JD(U) which is unlikely to survive a regime change in Delhi since their state government in Bihar now survives at the mercy of independents.

Meanwhile, it’s a more serious Laloo at work but the jokes are still there. To some extent, what is happening in 2014 can be seen as a replay of the 2004 Lok Sabha elections, when Laloo campaigned fiercely and distributed pictures of the Gujarat riots across the state. He won 21 Lok Sabha seats although some months later he would lose the state elections to Nitish Kumar. What this means is that the Gujarat riots and Modi can certainly be a mobilising factor in Bihar.

Similarly, in UP, with the Yadavs concentrated in some seats, the SP campaign is again picking up in central UP and Poorvanchal region after two rounds in western UP where the BJP did rather well. Now the reports from the ground suggest a somewhat changing equation in spite of what is seen as the misgovernance of the SP regime. Mulayam’s decision to also contest from Azamgarh in the Poorvanchal region besides his traditional seat Mainpuri seems to have helped galvanise his voters in the region. In Awadh too, in critical seats like Faizabad (that includes Ayodhya), it is the SP candidate who is now seen as the frontrunner.

Like Nitish, Mayawati provided better governance and she is very much in the fight. But the Yadav-Muslim combination, an arithmetical calculus of the Mandal era, is again being talked about in parts of UP and all of Bihar. Both Nitish and Mayawati have at some stage been partners with the BJP and that too could be a factor for minorities preferring the Yadavs in many seats.

True Beginning Of Our End