How To Write A Couplet 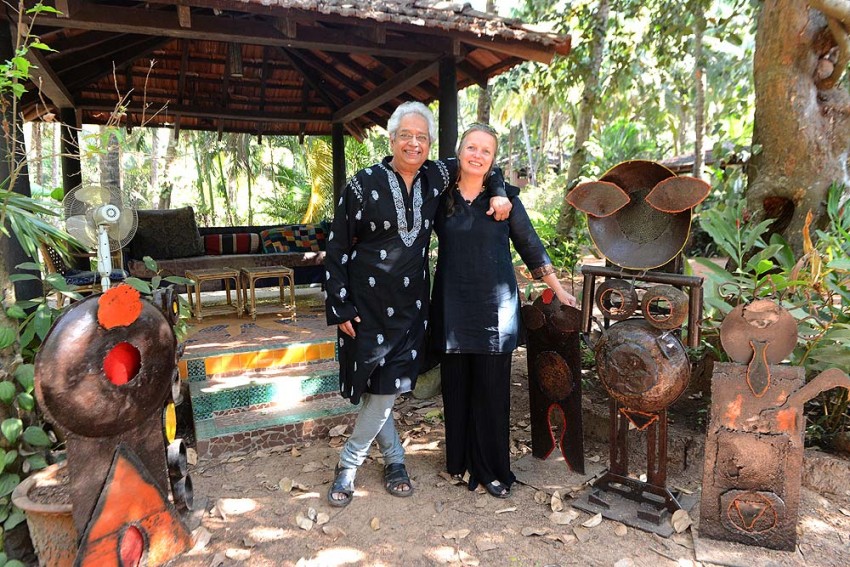 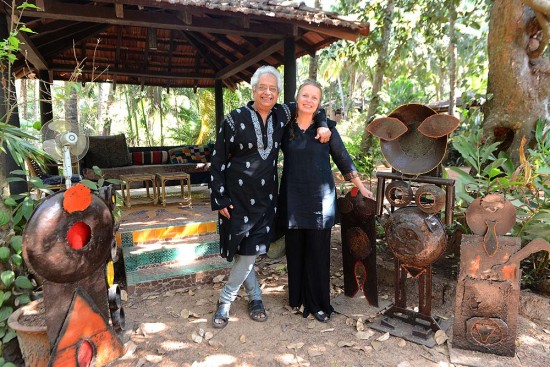 No matter where you stand on the Valentine’s Day spectrum, it’s hard to resist the love stories of great writers. When two creat­ive forces meet, one would imagine  exchanges of pas­s­ionate letters, diaries and poems, and the novels that could ensue. As with Simone de Beauvoir and Jean-Paul Sartre, Percy Bysshe Shelley and Mary Shelley, Vladimir Nabokov and Vera Nabokov. We picture their  arguments as poetic, their children as lit­e­rary geniuses, their afternoons spent lingering over sips of brandy, penning notes between tender looks. The chemistry is irrefutable. But for modern-day pairs that’s the stuff of dreams.

At author couple Saskya Jain and Christopher Kloeble’s earthy Japanese-imprint home in a leafy neighbourhood in Delhi, we spend a languorous afternoon in their warm spring-green kitchen (the centrepiece of the house, designed by a Japanese baker) amidst the scent of sushi and kasutera. “This is where we meet at lunch to compare notes. Christopher writes much faster and more and so, generally speaking, his editing process is longer. I think that’s how we are in person too. Sometimes he speaks too soon and things don’t come out as he really intended them to, and I tend to overthink things,” says Saskya, a young writer in her 30s who recently made her debut with the novel Fire Under Ash.

Christopher is from Germany and has two novels and a short story collection (all in German) to his credit. He’s working on his fourth novel. The two met in the spring of 2011 and got hitched a year later. “Ours began as a professional relationship but quickly turned into something else. There were a few months during which we only wrote to each other, since she was in New York and I in Berlin. We created a novel of letters,” says Christopher, smiling. 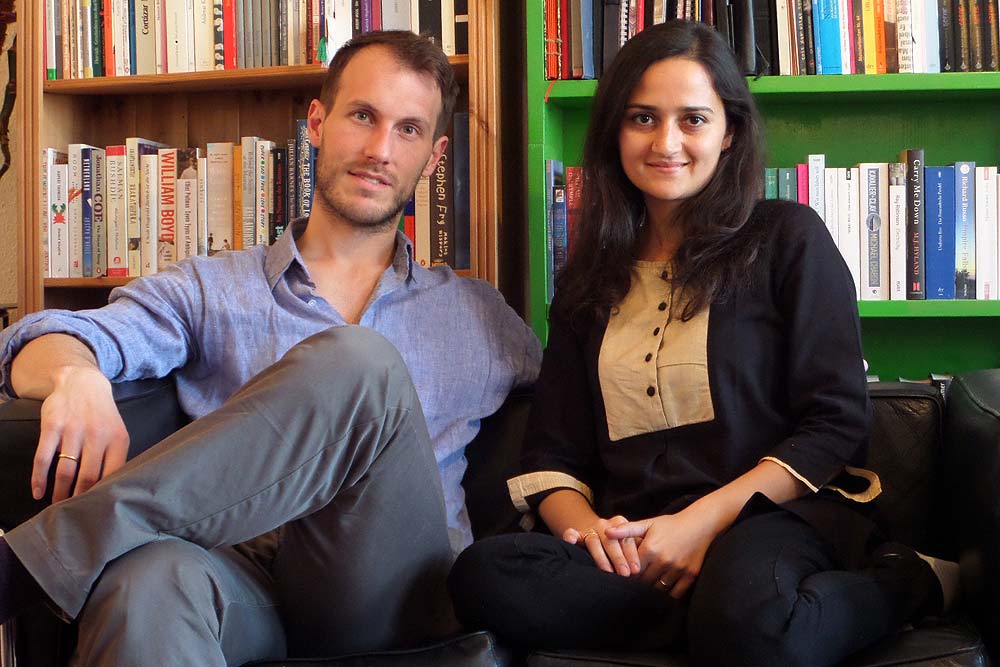 Saskya agrees. “For his birthday last year, I gifted him a bound edition of all our e-mails from those two, three months, before we got engaged in Delhi. It’s a thick book! So, yes, we liked each other’s writing a lot from the beginning, and commented on it before the first kiss happened, which is good, because it’s hard to start critiquing someone’s writing once you’ve woken up next to them.”

Both are early risers and retreat to their working spaces first thing in the morning to write for a few hours. “If Christopher is in the midst of something, it’s difficult to snap him out of it. I sometimes feel jealous of his focus and approach to writing,” confesses Saskya.

Christopher is able to write anywhere, anytime; Saskya broods more and writes slowly. Another difference is that they belong to very different literary traditions. “Of course, the boundaries do get blurred, since we read and discuss each other’s work, but it’s important to maintain independence and privacy,  even, or perhaps especially, in a relationship.”

A writer’s life is of course riddled with insecurities and anxieties. There are big projects that require them to stay apart for months. “At its best, you have an in-house editor, therapist and maalishwallah! But it’s a learning process, to know how much to give and take. Writers can be very needy people!” says Saskya.

Living and writing together under one roof can both help and hinder the writing process. Some couples get it right.

Having a common vocation can be hard work for a relationship, especially when publishing success, much like romance, is capricious. What’s crucial though, is to bear solitude in community. Psycho­analyst and distinguished writer Sudhir Kakar and wife Katharina, a scholar of comparative religion, discovered that through their 18-year-long relationship. Their beautiful home in a pristine Goa village reverberates with words, but also has a halo of quiet around it. “We’ve spent many more years together than most other couples because we are alw­ays together, travelling, working or writing. Yet, when we are at work, our spacious verandah gets divided into separate work zones. One end is occupied by Sudhir, the other by me. Sometimes, you need to withdraw from everything and your partner must understand that,” notes Katharina. Inti­macy comes with sharing a cycle of work and recreation. They are both interested in people, culture and spirituality, yet are poles apart as individuals. Katharina, the extrovert, keep herself busy with art and social work, while Sudhir, more reserved, delights in solitary swims and long beach walks. “Sudhir is very rooted and patient, rarely stressed out, while I work well under pressure. He has clearly def­ined writing schedules, while I work more on impulse.” With intimacy also comes criticism. “We are very critical of each other. That inoculates you from all other negative reviews at the least,” says Sud­hir, smiling. But mutual admiration and respect for each other’s work has ruled their relationship. “Katharina’s writ­ing is more anthropological. Her emp­a­thy for people and positive approach to life finds bearing in her work.” Evidently, Kath­arina is in thrall of Sudhir’s poe­tic style, his in-depth, sensitive writing, his ability to keep different containers for different kinds of thoughts. They say it’s about getting the physics, chemistry and biology of a relationship right. 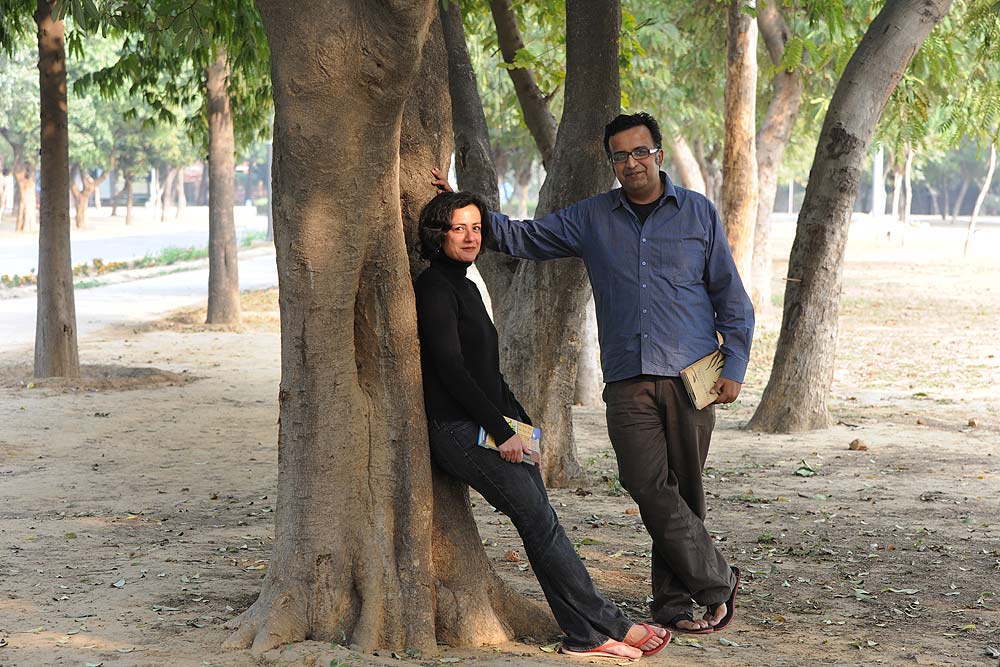 Amitabha Bagchi and Ratika Kapur who live on the IIT Delhi campus, where Amitabha teaches

If chemistry is the key, then it was a drawn-out discussion on lycopene, which gives tomatoes and other fruits and vegetables their red hue, that ignited Delhi-based Ratika Kapur and Ami­tabha Bagchi’s relationship. Overwinter, Rati­ka’s first novel, was long-listed for the Man Asian Literary Prize and she’s on to her second novel, while Amit­abha, a professor of computer science and engineering at IIT-Delhi, has three novels under his belt.  He says the chemistry was in fact physical. “Intellectual chemistry, while necessary, is not sufficient.”

But does one of them get jealous when the other is in a writing frenzy? “Typically, Amitabha will brood and I will rail. In any event, neither of us is particularly pleasant to be around with,” admits Ratika. Even though publishers haven’t approached them yet for a package deal, Ratika is game for a love story if it pro­m­ises huge sums of money. “We could call it ‘Desire in the Days of Doraemon’!” 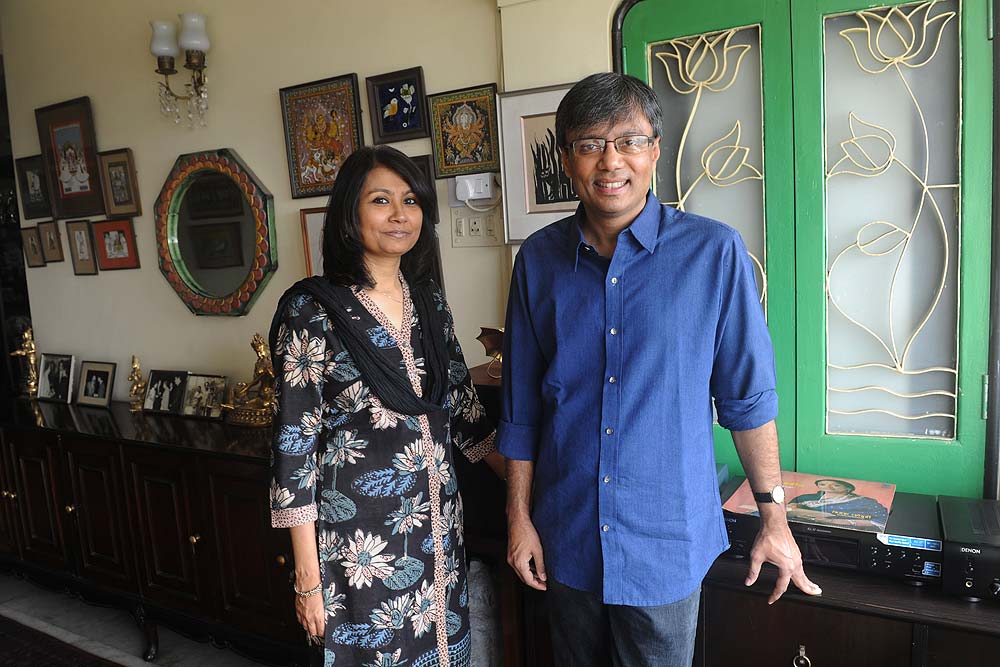 Jugalbandi time Rosinka and Amit Chaudhuri at their Calcutta home

Writer couple Amit Chaudhuri and Rosinka from Calcutta also felt that spark while both were doctoral students at Oxford in 1990. “I simply wanted to see this person again (sooner rather than later, at his insistence). Yet, marking that interest as intellectual chemistry would sound pretentious,” says Rosinka, a professor of cultural studies at the Centre for Studies in Social Sciences, Calcutta. Amit, who has written several books and also sings, recalls how she was the only one allowed to listen to him practice Hindustani classic at Oxford, and the conversations that ens­ued. “Since then, everything we do is in some sense working together, because there hasn’t been anything either of us has done since, in which we haven’t consulted each other.” It’s the ability to complement each other and be the other’s foil that sometimes makes for a successful relationship. “Where I’m impetuous, she’s practical. Her empirical research and scholarly work inform my work. There’s an understanding between us with regard to our responses to the world as well,” says Amit. But are there certain styles and techniques of writing they borrow from each other? No, says Rosinka. “Being the superior stylist, Amit’s style may have taught me to better my own, but no, there is no conscious or unconscious borrowing.”

Writers can be self-centred and dramatic, so is it possible to thrive in a partnership? Bangalore-based couple Zac O’Yeah, a Swedish crime fiction and travel writer, and his wife Anjum Hasan, who has written a couple of novels, short-stories and essays, feel that as a writer, it’s easier to understand another writer’s world: the irregular lifestyle, working hours and income, the undone dishes, creative projects, book launches, awards and champagne. There’s also the scope to discuss writing with a friend and ally. But the flipside is perhaps that their fates are tied to the same indu­stry, its ups and downs. There’s also an openness to take on surprises. “I was inspired by how he had travelled all over India on very little money but with a great sense of adventure and curiosity. That sparked our relationship way back in 1999,” says Anjum.

Has life changed since getting to know each other? “Well yes, we’ve both bec­o­me more professional, abandoning the idea of waiting for inspiration. What we do is a craft, and you work whether you feel inspired or not,” notes Zac. It’s the harmonious, mutually supportive creativity that probably spurs them on. What’s still to be accomplished though, is penning a love story together. “Yes, it’ll be our own and that’ll most likely be a Gothic horror love plot,” says Zac.

When The Page Turned