With this victory—which has the look of a tectonic plate shifting—Narendra Modi becomes the first non-Congress PM since Indira Gandhi to return to power for a full five-year term. 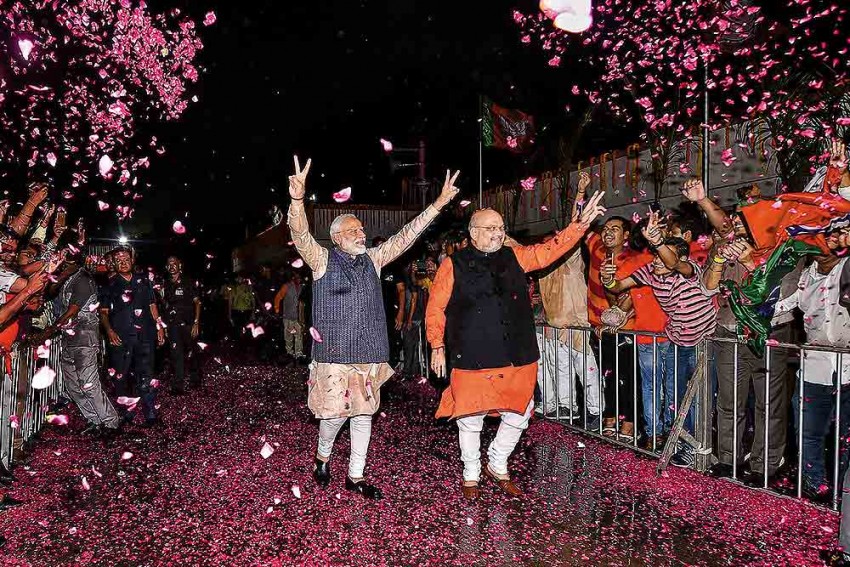 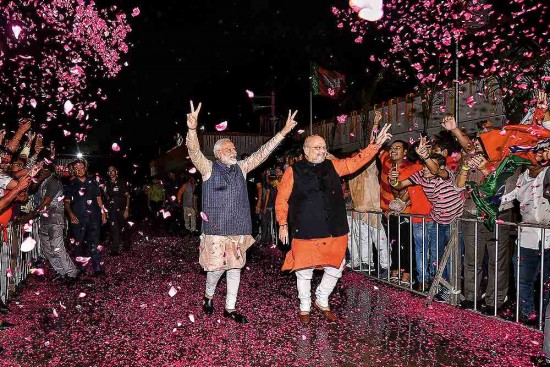 Words like ‘epochal’ get used lightly these days, for cricket and other diversions with only a fleeting effect on deep realities. But if there ever was consensus on the use of words to des­cribe an epic event, on all sides of India’s many political divides, it emerged this week. Everyone shared one view: that historians looking back a century or two later would see May 23, 2019, as a day when history turned. In some ways, its import is deeper than May 16, 2014. That was a huge wave...they called it ‘Tsunamo’. But that was only 31 per cent. A word is waiting to be coined that can express something way bigger than that: a collective act, performed by almost 40 per cent of those who voted in this general election, across the country. PM Narendra Modi’s helmsmanship has been re-endorsed in a most emphatic way. History was not made without other things making way for it. Established political premises stood dem­olished. A caste coalition, crafted only for this battle and without any deeper mut­ual empathies, crumbled before a universalising, homogenising narrative, and a wall-to-wall BJP campaign covering the last mile. The miles left untouched will now exist as vulnerable zones: the BJP’s new chieftains, who have tasted the kind of success their progenitors perhaps didn’t envision, have promised to conquer all.

With this victory—which has the look of a tectonic plate shifting—Modi becomes the first non-Congress PM since Indira Gandhi to return to power for a full five-year term. He bucked anti-incumbency and came back with a far greater consensus. With his talismanic sway, the BJP has transcended caste, class and reg­ional identity. Modi called it a mandate from ‘New India’ in his address to party workers on May 23 evening. His metaphors were also epic: 130 crore Indians “stood up for India”, he said, like Lord Krishna had stood up for Hastinapur in Mahabharata. Hundreds of cheering party workers stood around at the BJP headquarters, soaking in a late-evening drizzle and that epic mood, as Modi struck a compassionate, non-combative note, breaking from the acrimony of one of the longest campaigns ever. He pledged to run the nation by consensus and not act out of malice. “I promise not to do anything for myself,” he said. “And I promise every cell in my body is dedicated to the nation.” The chants of “Modi, Modi…” reverberated. 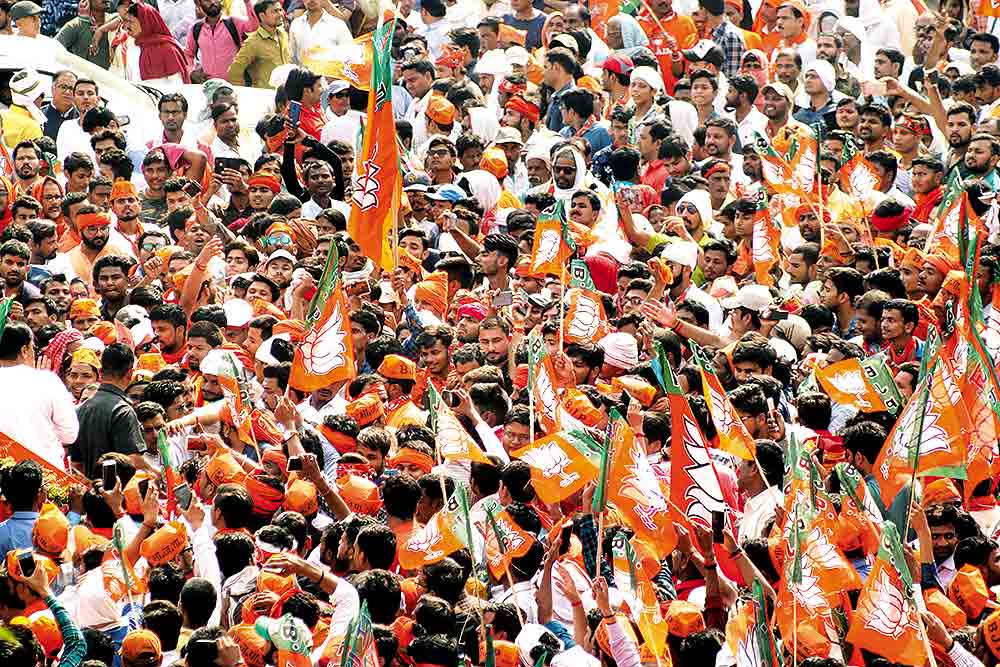 Modi supporters during his Varanasi roadshow.

Photograph by PTI
A caste coalition, crafted without any deeper mutual empathies, crumbled before a homogenising ‘Nation First’ narrative.

Whichever way you look at it, “Nation First” was the theme animating the BJP’s wildly successful campaign. The entire narrative was built around it. From the flexing of muscles on Balakot, to party president Amit Shah’s references to how “termites” (illegal immigrants) would be thrown out. It proved a tactically productive upgradation of Hindutva: after a brief time in the spotlight a few months ago, Ayodhya had receded from sight. But the line between strident nationalism and hard Hindutva blurred as the BJP talked unapologetically about the National Register of Citizens (NRC) and the Citizenship Amendment Bill on the one hand, and fielded Pragya Singh Thakur to make a statement against the idea of ‘Hindu terror’.

The Opposition kept accusing the BJP of following a divisive agenda, but it has other things to contemplate now. Its own narratives, its numbers, its fate: they have been granted the luxury of five more years to introspect at leisure. The saffronists charted new territory by making significant ­inr­oads in West Bengal, Odisha and the Northeast. The BJP’s voteshare in West Bengal, once a ‘red fortress’, soared from 17 per cent in 2014 to nearly 40 per cent. “We have won 18 seats (up from two in 2014) in the state despite the TMC’s lies and atrocities,” Shah said at the victory rally, vowing to establish BJP’s sup­remacy in the state in the coming days. The TMC’s combative supremo, Mamata Banerjee, will be looking over its shoulder very nervously. Her predecessor, the Left, would be looking within. It has drawn a blank in its former home: the voteshare haemorrhage it suffered, in favour of the BJP, is upwards of a massive 20 per cent. 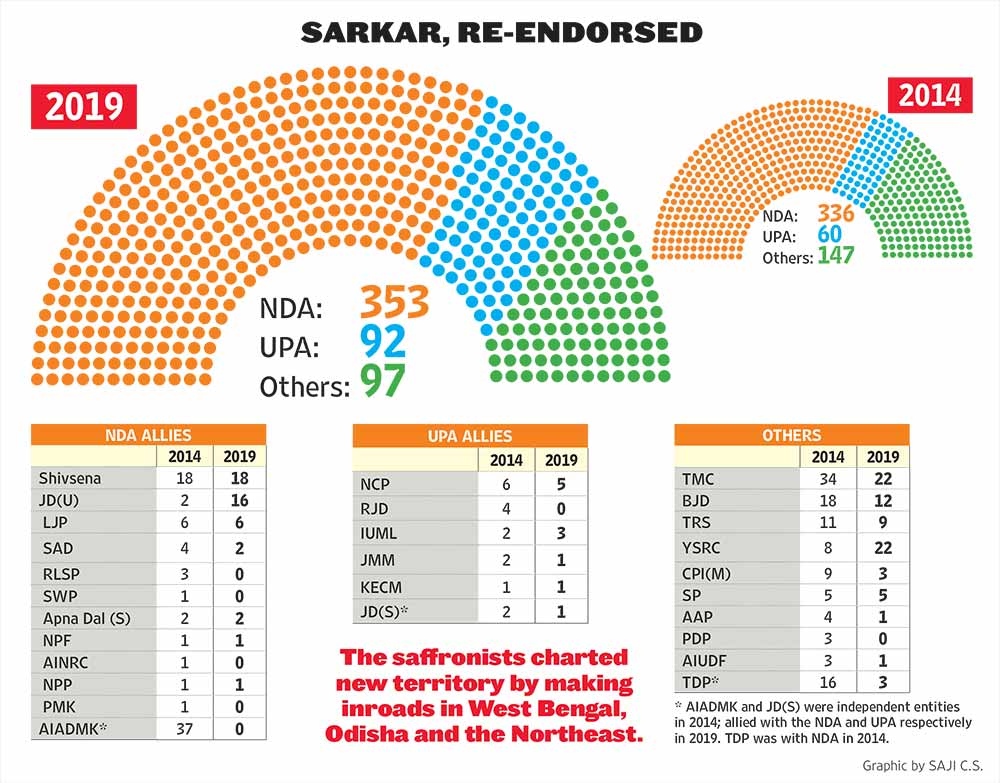 The Opposition kept accusing the BJP of having a divisive agenda, but it has to contemplate now on its own narratives, numbers, fate.

The BJP’s kingsize tally of 303 seats meant a near-washout for the principal Opposition party too. The Congress performed only marginally better than 2014, when it was reduced to its lowest-ever tally of 44 seats. It managed just 52 seats, still not enough to earn the Leader of Opposition post in Lok Sabha, which requires at least 10 per cent seats of the total House strength. And this came after strenuous efforts, even an outside chance, so the gloom within its leading elites would be total and all-consuming—qualitatively different from 2014, when it had all but thrown in the towel anyway.

The biggest upset for the Congress came from Uttar Pradesh as party president Rahul Gandhi, symbolically, lost even family pocket-­borough Amethi to a feisty Smriti Irani. Faiz’s old lines—“sab taaj uchhaale jaayenge” (all crowns will be discarded)—rang out with a reverse irony for the grand old party, still defined by its dynasty. It’s left with a solitary seat in UP—Sonia Gandhi’s Rae Bareli. It also lost all states where it was in a direct contest with the BJP, barring Punjab. The long list includes Rajasthan, Madhya Pradesh and Chhattisgarh, where it had won assembly elections just six months ago. Kerala ­remains its only island.

The biggest failure was that of the much-touted Mahagathbandhan in UP, where sworn enemies SP and BSP had come together for sheer survival, along with the RLD. It ended up with just 15 out of 80 seats. The BJP managed to trump the barrier of caste loyalties, on which the Mahagathbandhan was based, to win over 62 seats in UP. The Opposition’s unity attempts were self-negated by personal ambitions: they remained a muddled, motley aggregation, without a real counter-narrative. People preferred to give a decisive mandate for stability, endorsing the BJP lines of a ‘majboot sarkaar’ instead of a ‘majboor sarkaar’. BJP leaders claim it was not a negative—not the TINA (there is no alternative) factor—but positive attributes like trust that worked for Modi. The numbers bolster that.

Modi was at the centre of BJP’s campaign, looming larger than his 3D holograms as a chevalier-like figure who had the gumption to ‘enter enemy territory to avenge Pulwama’—“dushman ko ghar mein ghus ke maara.” The voters on the ground bought into those speeches—the same speeches that the urban elites, who failed to sense the groundswell for Modi, found coarse and distasteful. The candidates were not important. It was ‘Modi for PM’ all the way: the lotus symbol was merely an instrument to accomplish that.

The voters on the ground bought into the speeches that urban elites, who failed to sense the groundswell for Modi, found distasteful.

On the other hand, the Opposition struggled with its ­messaging. Rahul’s ‘Chowkidar chor hai’ refrain cut no ice, while Modi’s constant taunts about ‘naamdars’ clicked. The voters clearly felt no thrill at the prospect of old entitled elites moving in to reclaim their crowns. They have shown the door to a whole roster of dynasts, ­including Jyotiraditya Scindia, Gaurav Gogoi, Sushmita Dev, Deepender Singh Hooda, Jitin Prasada and Milind Deora. They also wanted “something more than just a sporadic arithmetic of ­dominant castes and numerical majorities,” says political analyst Manisha Priyam.

Shah too made that point in his victory speech. People had rejected Congress for its ‘parivaarvaad’ (dynasticism), ‘jaativaad’ (casteism) and ‘tushtikaran’ (app­easement), he said. Just behind Modi, or ahead of him preparing the fields for him to sow, Shah looms large as a man with visibly increasing power now. Gandhinagar with him, expect to see him in a powerful cabinet post. For someone who pledged a ‘Congress-mukt India’ in 2014, Shah was happy to note the party had failed to get even a single seat in 19 states and UTs—while the BJP got over 50 per cent voteshare in 17 states.

It was after a huge win in the UP assembly elections in 2017 that Shah had set the target of 50 per cent voteshare. When the Opposition started showing signs of cohering to take on Modi, Shah publicly exhorted party workers to work for that 50 per cent, which would make all alliances redundant. He also gave the self-fulfilling slogan of ‘Ab ki baar 300 paar’ when all analysts said the BJP could only go down from its 2014 tally—that it would not be able to repeat its near-cent per cent show in the Hindi belt. The BJP’s own strategies often rested on this premise, focusing on ‘compensating’ wins on virgin turf. In the end, it won new and kept the old. Modi, duly, took a dig at “political pundits” who had failed to see that India has changed. 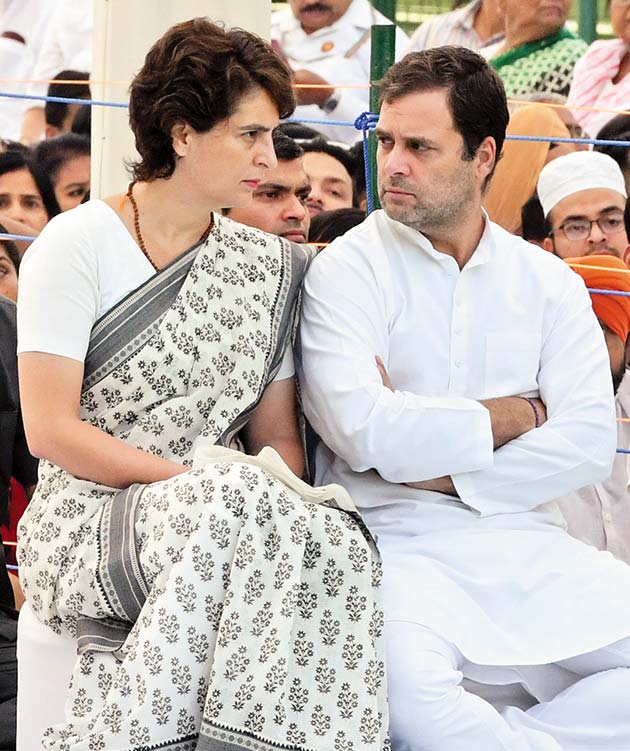 Despite Priyanka’s entry into the party, Rahul Gandhi’s fortunes did not pick up.

So what changed India? Perhaps it’s a new caste-neutral constituency of the poor, reminiscent of the old, pre-Mandal Congress umbrella, who benefited from Modi’s welfare schemes. The 22 crore ‘laabhaarthi’ (beneficiary) families Shah spoke about, who felt the effects of Swachh Bharat, Ujjwala, Jan Dhan, Mudra Yojana, Awas Yojana and Ayushman Bharat…little things of real life that mattered. All beneficiaries were ­contacted by BJP workers on the ground and through specially created call-centres. “This went beyond caste, region, even religion. That’s the reason the BJP won in SC/ST seats and also in some where minorities have a significant presence,” explains BJP vice-president Vinay Sahasrabuddhe.

The South, barring Karnataka, remains aloof to the BJP’s charms, but Shah has promised to correct that. He has time and again proved he’s as good as his word. Under him, the BJP now has 11 crore members—it’s the largest political party in the world. India, as of now, stands converted too.

History Will Judge Modi Govt On How It Handles Critical Issues