Both Sachin and Kumble have been called the best, so why are they still being panned by the Indian people? 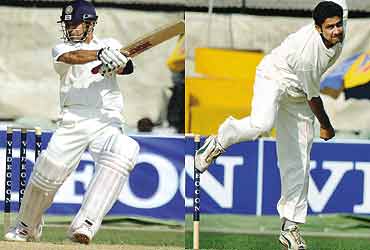 During the preparations for England's tour of India in 1992-93, the English coach, Keith Fletcher, went to South Africa to check out the Indian cricket team. Assessing Anil Kumble's bowling during the second Test in Johannesburg, Fletcher was dismissive. England need not worry, he said, "I have not seen him turn a ball."

Kumble took two wickets for 60 runs in the first innings of the Test and six for 53 in the second, and a further 21 in three Tests when Fletcher came to India with his wards and bit the dust.

However, whoever said actions spoke louder than words didn't know what he was talking about. Kumble's wickets—all 438 of them—have failed to constitute enough of a retort for Fletcher. The words have stuck.

In 15 years of international cricket, Kumble has been variously described as determined, fiercely competitive, accurate, disciplined, and deadly on helpful tracks, but hardly ever great—an epithet showered on every other delivery of Shane Warne. The Australian walks into any all-time eleven, whereas Kumble does not get a place even in an all-time Indian eleven. Even the compliments after he matched Kapil Dev's record come grudgingly. "Anil doesn't turn the ball as much but he has shown what a will to succeed can do," said Saurav Ganguly.

So, what's it? Unwavering reverence for the words of a white-skinned foreigner? Unlikely. For, we have not shown half as much regard for what a legion of Australians have to say about Sachin Tendulkar.

Warne recently described Brian Lara as the third best batsman in the world "behind Sachin Tendulkar and daylight". Ricky Ponting, too, rates Tendulkar better than Lara, Matthew Hayden and the Waugh brothers. In a survey of Australia's 145 first-class cricketers, 60 per cent said Tendulkar was the best, followed by Steve Waugh (27 per cent) and Lara (3 per cent).