A rendition of poet Ghulam Ahmad Mahjoor's classic, "Ha Gulo" is the th first Kashmiri song to be featured on Coke Studio Exp­lorer, an initiative by the Pakistani franchise of ­music platform Coke Studio. 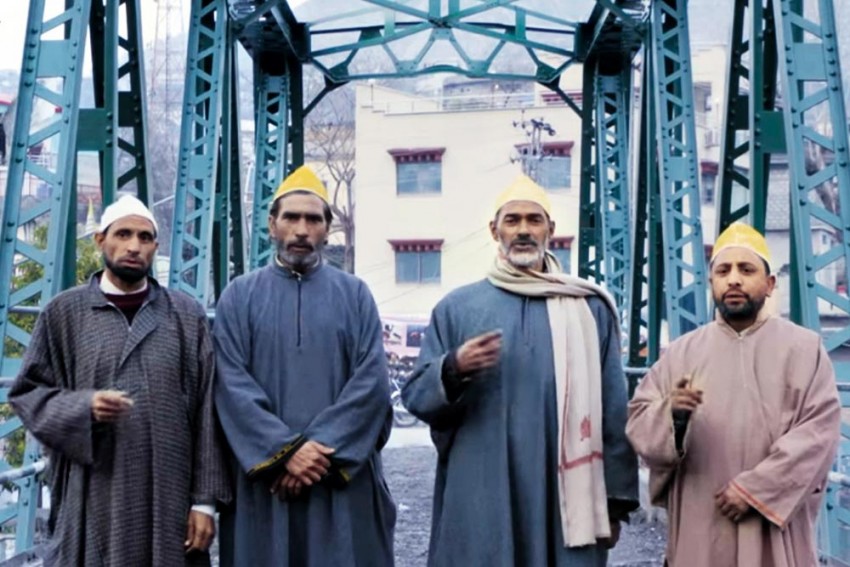 Longing Ode
All four members of the band Qasamir are from the Valley
Naseer Ganai July 18, 2018 00:00 IST How A Band Featured In Coke Studio Pakistan Is Winning Hearts In The Valley 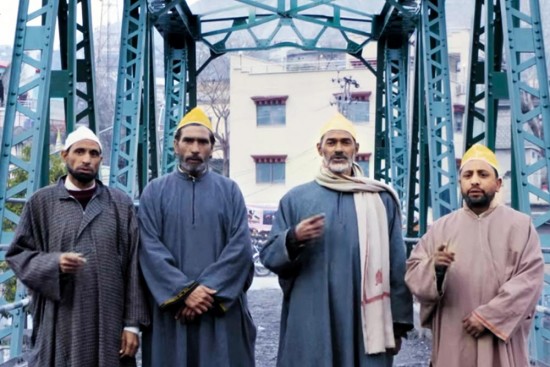 O flower, have you seen my love? O bulbul, you search for my belo­ved. So sang the poet 78 years ago, as a valley writhed amid the tum­ultuous twilight of its ancien rég­ime.  And recently, so also sang Altaf Ahmad Mir, 55, a singer based in Muzaffarabad, the capital of Pakis­tan-occupied Kashmir (PoK). The well-loved lines of Ghulam Ahmad Mahjoor (1887–1958) found musical exp­ression when Mir and his band, Qas­amir, were featured on Coke Studio Exp­lorer, an initiative by the Pakistani franchise of ­music platform Coke Studio that seeks to unearth div­erse and undiscovered talent. And alt­hough the accents of PoK are poles apart from the Kashmiri spoken in the Valley, leading Kashmiri singers, young and old alike, say the band’s rendition—performed by musicians who have their roots in the Valley, using traditional instruments—captures the essence of Kashmiri music.

The poet, Mahjoor, was no bystander to the events of the 1940s, no ascetic meditating in the mountains, but an idealist whose poetry was published regularly in Hamdard, a newspaper set up by Sheikh Abdullah and Prem Nath Bazaz when they were enmeshed in the struggle against feudalism and the rule of the Maharaja. Together with the likes of Dina Nath Nadim and Abdul Ahad Azad, Mahjoor was a political poet whose works held up a mirror to the political reality of Kashmir. He supported the revolutionary cause until he grew disillusioned after 1947.

‘Walo ha bagwano naw baharuk shaan payda kar (Come ye gardener, let us create the magnificence of a new spring),’ is perhaps Mahjoor’s most iconic contribution to Kashmiri resistance poetry, a poem frequently read over the years by political leaders as they peddled their promises of a new dawn. Atal Behari Vajpayee, then prime minister, recited it in Srinagar in 2003 as he strove to engender hope of a new spring among the people while seeking to solve the Valley’s troubles.

As with the poet, so with the singer. Altaf Ahmad Mir, lead singer of Qasamir, has never enjoyed the luxury of being a reclusive aesthete. A native of the Janglat Mandi area of south Kashmir’s Anantnag district, Mir was once known as a folk and Sufiyana singer who would often be inv­ited to perform at local weddings. But he cut those halcyon days short at the age of 22 when he joined thousands of other youngsters who crossed the Line of Control (LoC) in the early 1990s to receive arms training in Pakistan—and become militants. His father would die mere months after his departure. “My father was deeply attached to him. He couldn’t bear the separation,” Mir’s younger brother, Javid Malik, tells Outlook.

Mir came back to the Valley in 1995 to find a far more perilous battleground. The government-backed militia known as the  Ikhwan had full control over south Kashmir and were infamous for their terror. Mir remained at home for a little while, keeping himself busy with handicrafts, specifically Aari (chain-stitching). But fear of the Ikhwan haunted him. “Mir ­decided to cross the LoC once again to live life away from the grip of a routine ­nightmare,” says Javid. 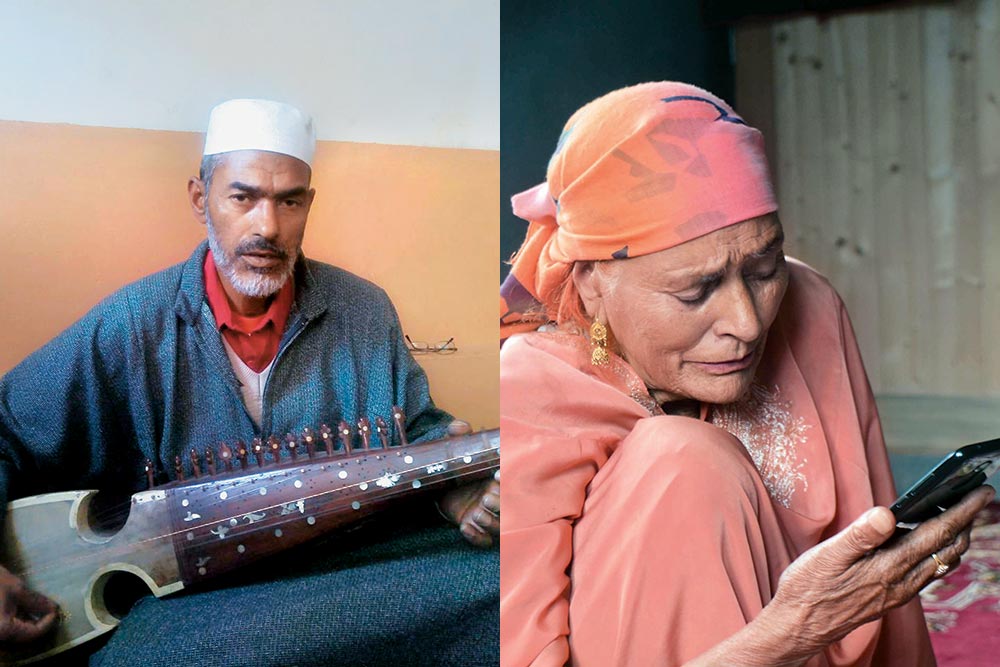 Photograph by Muneeb Ul Islam
Altaf Mir’s (above) song is a loving ­message of a son’s wish to come home, ­according to his mother, Raja Begum.

Returning to PoK in 1996, Mir decided to put his skills to good use by working for an NGO to train boys in chain-stitching. And neither did he neglect his musical gifts; together with three others from the Valley, he went on to found the band, Qasamir. The release of the song has had a bittersweet impact on Mir’s family. “When I met him, I couldn’t recognise him. He had turned old. He looks so old,” says his mother, Raja Begum, who hadn’t seen her son for 15 long years before she went to visit him in Pakistan. She now watches the song on her mobile phone several times each day, and finds in it a message of longing and love: a mother’s love for her son and the son’s longing to be back home. “I wish him back in my home,” she says. But the family are indeed happy with their newfound fame, with their house now frequented by ­admirers and reporters.

And what of Kashmiri artistes and art lovers? Euphoria seems to be the order of the day. “In the past few years, a new crop of young musicians and singers have reinvented traditional Kashmiri music, giving it a contemporary touch. Artistes like Abha Hanjura, Ali Saifuddin, Alif, Rauhan, Yawar Abdal Parvaaz and many others have not only drawn the younger generation towards their own music and poetry, but also taken it to a bigger stage. Most of them have made good use of social media, making low-budget but well-produced music videos,” says Jabeer Ahmad, who last year produced a short film, Kashmir, the Warmest Place on Earth, to promote tourism. The film got over five million views on social media within days of its release.  Jabeer, who is also vice president of J. Walter Thomson, adds, “Even Bollywood movies and advertising have started using Kashmiri tunes and lyrics. Vibha Saraf recently sang the opening lines of the song ‘Dilbaro’ for Raazi and it is quite remarkable.”

However, in the absence of a commercial market within the state, most of these young artistes are either self-sponsoring or dependent on small sponsorship from a few local brands. The other challenge is the limited number of high-end recording studios within the Valley. For Muzaffer Ahmad Bhat, head of the department of music at the Women’s College, Srinagar, the Coke Studio song might boost the morale of young Kashmiri singers, but he is doubtful as to whether it can revive folk and sufiyana music in the Valley. The Kashmiri music industry did see a boom for a couple of decades after insurgency broke out in 1990, with many young ghazal and folk singers, both men and women, gaining popularity. “Radio Kashmir, Srinagar, and Doordarshan, Srinagar gave them a platform and popularised their voice,” says Bhat.

But after the 2008 uprising, new singers surfaced who seemed uninterested in going to established government institutions to perform.  These youngsters, inc­luding Ali Saffudin, perform privately and are popular among the new generation, especially for their resistance rap. In 2010, when mass unrest erupted in the Valley, rap music became the rage. “I protest”, by Roushan Illahi, alias MC Kash, set the trend. Now there are more than a dozen such hip-hop artistes who perform mostly with the guitar and other instruments, rather than traditional Kashmiri instruments like the santoor, sazi-kashmir,  (a bowed instrument), the sehtar, (a stringed instrument), or percussion instruments like the dukra (tabla).

In this backdrop, perhaps many simply yearn for a return to tradition. “The Coke Studio song has resonance in Kashmir because they have utilised the basic folk style, and that is the sole reason people are drawn to it. Yes, they have also used additional rhythmic instruments, but that has not changed the folk flavour,” says Bhat. Young musicians, on the other hand, may beg to differ. Zeeshan Nabi, 25, who studied Music in Chennai and later in Australia, and is a member of a band called Meraki (your soul, creativity, or love), says, “Our problem is that if we use the guitar, it is seen as a rebellion of sorts by some.” Nevertheless, “I liked the Coke Studio song and its fusion,” he adds.

Waheed Jeelani, a well-known-Kashmiri singer, says, “As a Kashmiri artiste and art promoter, I feel honoured when a genuine artiste is promoted and presented on the national or international level in a proper way. The Ha Gulo track of the Coke Studio song is really inspiring and it has brought Mahjoor’s great poem to an international audience.”  However, he adds, the dance of senior folk singers shown in the video is not part of Kashmiri culture and should have been avoided.

Asmat Ashai, a Kashmiri-American who teaches language in the US and runs Funkar International, an NGO that popularises Kashmiri folk and Sufiyana music in Western countries, sums up another ­positive impact of the song: “We don’t want Kashmir to be seen as just a conflict zone. It has people, it has life, it has music, it has literature and we have great poetry. When you look at Kashmir, you just see it as India-Pakistan conflict.  But we are at the same time a thriving lively cultural identity, and the Coke Studio song is a ref­lection of it.” And despite all the caveats, it’s hard to deny that the song and its popularity have allowed such a lively Kashmiri voice to be heard amid the rumbling of the guns.

A Splash Of Rustic Finery: How Gamchha Is Taking Fashion World By Storm