The definition of a hit is changing. You can see empty seats in a multiplex, yet be watching one. 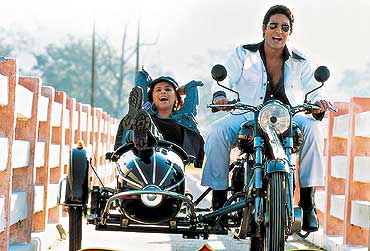 outlookindia.com
-0001-11-30T00:00:00+0553
Bunty Aur Babli has been declared a hit. But go to a cinema hall near you and chances are that tickets for the favourite film of the season are freely available. No long queues at the ticket window, no advance booking, no housefull boards and certainly no scalpers. Waqt is another recent hit but you may well have seen it on the fourth day of its release with precisely two other people giving you company in the balcony. Now go back in time to Mr Natwarlal for which you had to book tickets 15 days in advance. Or Jai Santoshi Ma for which the halls remained chock-a-block even after one year of its release.

In the last decade, the business of filmmaking has changed radically in Bollywood and so has the definition of success. Films like Sholay and Maine Pyar Kiya that just ran on and on don't seem to be getting made any more. The housefull board is gathering dust in most halls and the one profession that has become virtually extinct is that of the blackmarketeer...the colourful Munna of Rangeela doesn't hang outside the theatres anymore.

Even 93 years after Raja Harishchandra, the first Indian feature film, was released, our film industry hasn't been able to develop a single, foolproof, standardised method of measuring a film's performance. There are as many trade verdicts as there are analysts, leaving any sane viewer thoroughly confused as to what worked at the box office and what didn't (see box).

So what's happening? Is Bollywood not delivering as many hits as it used to? The confusion begins here. According to the data available on indiafm.com, the ratio of flops has gone up alarmingly from 47 per cent in 1980 to 93 per cent in 2004. However, according to a report by Yes Bank for The Film and TV Producers Guild, there has been a 29.08 per cent growth in gross box-office collections between 2001 and 2004.

So are the rush (of viewers) and the (long) run no longer safe measures to calibrate a film's success? "The business model, the monetary concepts are changing," says Delhi distributor Sanjay Mehta. "Silver jubilee is a thing of the past. Films don't even run for 25 days," says Indu Mirani, film critic and associate editor, Box Office.

Komal Nahata, editor, Film Information, attributes this to the increase in the number of prints. In 1994, Hum Aapke Hain Kaun was a limited release film, so when very few of its prints hit the market, viewers clamoured for their share of them. "There were just two prints in Delhi, at Satyam and Sapna, with roughly just 2,000 seats per show," says Mehta. In contrast, today, a Veer Zaara floods the markets with 700 prints to maximise revenues in the first few days and to reduce losses due to piracy.

"Earlier, 20 prints of a film were released in the Bombay circuit, now it has gone up to 50. In Delhi, prints have increased from 10 to at least 25," says Nahata. The rise in prints is to support the increase in the number of screens, courtesy the multiplex boom. "Now there are lot more seats available per show," says Mehta.

In a nutshell, there are far more avenues to catch a film and that has led to a concomitant reduction in crowds at any one theatre. The same number of people can now view a film in a week as would have earlier in a month. No wonder, most films are making money in the very first week itself, at times just the first weekend is enough to recover the cost of a film. "What a film makes in 15 days today is as good as what it used to make in 15 weeks earlier. The duration of the a film's run may have declined but the collections have risen," claims Mehta.

According to the Yes Bank report, gross box-office collections over the opening weekend, first week and the first three weeks contributed 23 per cent, 43 per cent and 81 per cent of total gross for the top 20 films of 2004. The opening weekend (Friday to Sunday) constitutes as much as 56 per cent of cinema attendances.

There have been other new defining changes as well. Earlier everyone you knew, from close friends to extended family, would have watched a trend-setting film. Now count the number of people you know who have seen Kya Kool Hain Hum, one of this year's biggest hits. Clearly, universality of appeal doesn't matter anymore. Audience segmentation runs deep. The youth, urban and NRI markets, and territories like Mumbai alone, are strong enough to pull a film through. For instance, for a Shahrukh Khan starrer, the NRI market alone can rake in 40 to 45 per cent of the earnings. Add on urban markets, and the figure goes up to 75 per cent. Who cares then whether Kanpur or Patna also like a film? 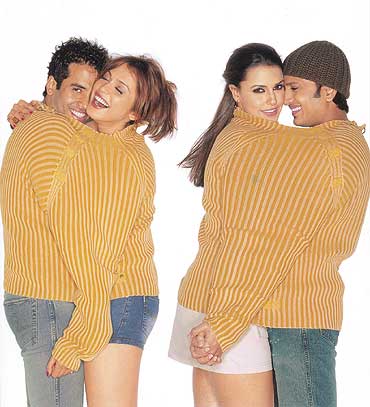 Blame this on the multiplexes. Their exorbitant ticket rates ensure that even if two people watch a film show, they'll add more to the profits than 10 people watching the same film in a small town. So, as much as 75 per cent of Bunty Aur Babli's earnings would come from the multiplexes, claims Nahata. Moreover, the tax exemption for multiplexes in Maharashtra and Gujarat means no sharing of profits with the government either. According to the Yes Bank report, multiplexes, which constitute 2.3 per cent of screens in India, account for 21 to 25 per cent of total grosses for all Hindi films.

In fact, today, ticket sales are not the sole determinants of a film's profits. The theatrical distribution market exhausts within four weeks of release. But there are other windows that have opened up: DVD, cable and satellite rights for example. The home video market is opening up between one to eight weeks of theatrical release and TV within six to nine weeks. Average realisation to producers of top 50 Hindi films from sale of home video rights has risen almost 100 per cent in the last two years. A big film can fetch as much as Rs 1.5 crore for DVD rights. And cellphone ringtones are another growing income stream.

"Bunty Aur Babli can easily get Rs 4.5 crore for satellite rights which is about 35 per cent of its Rs 12 crore budget," explains Nahata. "Filmmakers like Ram Gopal Verma depend a lot on such non-theatrical revenue." According to Mirani, satellite and TV rights for Sanjay Leela Bhansali's Black have gone for a stunning Rs 5 crore.

So next time if you are the lone viewer of a film at a multiplex, don't despair. You might still be watching a hit.